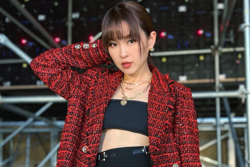 Ella hopes talking about her experiences can promote the importance of prioritising mental health. Photo: The Star

Malaysian rock star Ella admitted that her anxiety had taken a toll on her to the point where she lost her drive to perform.

Ella shared that she has been struggling with anxiety for a long time. While still able cope initially, her mental health worsened amidst the pandemic, especially during the MCO.

"There was a time when I suffered from severe anxiety and only my family members were aware of my condition. What I had experienced was not so bad to the point that I felt like harming myself, so I could still control it," she told mStar, The Star's Malay-language portal.

The 55-year-old further explained: "Among other things, my hands would begin to sweat a lot and I remember once that I completely lost my mood to perform right before the show was about to take place."

The Sembilu singer has become more open about her mental health in recent years, previously revealing her struggles with anxiety on her personal Facebook page. She has also gone on online talk shows to speak about her experiences and remind her fans who may also be suffering that they are not alone.

"I advise those out there to be more open about the struggles they are experiencing. Don't assume that it can be solved on their own because mental health is not a light matter," Ella emphasised.

The singer is grateful to have more control on her anxiety now after consulting a doctor and being placed on medication.