If you're looking for Prince Harry and Meghan Markle on the official website of the British royal family, you would have to scroll down ... further down.

Up until recently, the next on the website were Prince Harry and Meghan.

The website was under construction for a few weeks and when it went back online recently, there have been a reshuffle.

According UK's Daily Express, the Duke and Duchess of Sussex are now below nine members of the Royal Family.

Prince Harry and Meghan are now slotted after Prince Edward and his wife Sophie.

On the website, Prince Harry's bio has also been updated to: "As announced in January, The Duke and Duchess have stepped back as senior members of The Royal Family. They are balancing their time between the United Kingdom and North America, continuing to honour their duty to The Queen, the Commonwealth, and their patronages. Frogmore Cottage in the UK remains their family home." 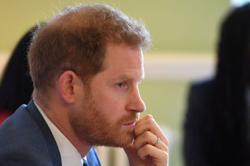