Both characters sport similar eye make-up and hair braids. Photos: The Legend Of The Condor Heroes: The Dragon Tamer/Weibo and Handout

Has Captain Jack Sparrow from the Pirates Of The Caribbean film series (2003 to 2017) turned into "Western Venom" Ouyang Feng?

That was what some fans were wondering after the trailer for the new Web movie, The Legend Of The Condor Heroes: The Dragon Tamer, was released last week.

Ouyang, a famous villain in late Hong Kong author Louis Cha's martial arts novel The Legend Of The Condor Heroes, was known for his signature martial arts technique, the Toad Skill, and his expertise in poisons.

The character has been played in the past by famous actors such as Tony Leung Chiu Wai and the late Leslie Cheung.

The latest incarnation of Ouyang is played by Hong Kong singer-actor Alex To, 59, who posted the trailer on his social media accounts last week.

Fans noted the similarities of the make-up for his latest role to that for Sparrow, which was made famous by Hollywood actor Johnny Depp in Pirates Of The Caribbean. Both characters sport similar eye make-up and hair braids. Sparrow wears a bandana; Ouyang has a headband.

The movie, which also stars Hong Kong actors such as Eddie Kwan, Felix Lok and Lam Tze Chung, is scheduled to be released on June 12.

It is the latest movie to be adapted from Cha's martial arts novels, with another movie, The Legend Of The Condor Heroes: The Cadaverous Claws, also due to be released around the same time. – The Straits Times/Asia News Network 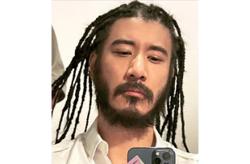