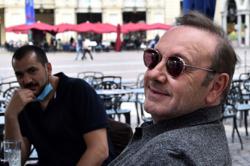 A man accusing Oscar-winning actor Kevin Spacey (pic) of sexually abusing him in the 1980s when he was 14 cannot proceed anonymously in court, a judge ruled on May 3, 2021. Photo: AP

A man who said he was abused by Kevin Spacey as a teen must reveal his identity if he wants to proceed with a lawsuit, a judge ruled Monday (May 3).

Manhattan Federal Judge Lewis Kaplan wrote that the man, who is in his 50s and identified in court papers as C.D., could not proceed anonymously because he’d spoken to people about Spacey’s alleged abuse since the 1990s.

“The evidence suggests that C.D. knowingly and repeatedly took the risk that any of these individuals at one point or another would reveal his true identity in a manner that would bring that identity to wide public attention, particularly given Spacey’s celebrity, ” Kaplan wrote.

C.D. alleges that he was 12 years old when he met Spacey in 1981. At the time, Spacey was C.D.’s acting teacher in Westchester. Spacey initiated a sexual relationship with C.D. two years later after they crossed paths in New York City, according to the suit. C.D. fled Spacey’s abuse after the actor attempted a sexual act that the teen resisted, the lawsuit alleges.

C.D. seeks over US$40mil in damages. His allegations, among others, resulted in Spacey, 61, being fired from the hit House Of Cards Netflix series. Spacey hasn’t appeared in a new movie since 2018.

Kaplan wrote that the “rather unusual facts” of the case weighed in favour of denying C.D. the right to proceed anonymously.

C.D. cooperated with a New York Magazine article revealing his claims of abuse without identifying him. In reporting the story, New York Magazine contacted people who knew C.D. and corroborated his allegations. C.D. then contacted another Spacey accuser, Anthony Rapp, through an intermediary and persuaded Rapp to join his lawsuit.