It may not be business as usual in the world of TV and movies, with restrictions on travel, new SOPs for filming and limited resources causing many productions to grind to a halt, but industry experts are doing what they do best to navigate this strange landscape: getting creative.

From getting cast members to put together their own sets and film themselves, filmmakers have gotten used to “remote directing” and finding innovative ways to make their scripts come to life.

A big advocate of local filmmakers for 14 years and counting, BMW Group Malaysia has continued to encourage and support creative endeavours through the BMW Shorties short film competition.

This year, through a live event in three locations, the BMW Shorties & Chill virtual event was held in celebration and support of the creative arts community.

“The BMW Shorties was started as a project to identify, cultivate and support emerging film talent and content creators in Malaysia, ” said BMW Group Malaysia head of corporate communications Sashi Ambi during the event, which featured highlights from previous years’ competitors, as well as a reel on BMW’s events held in 2020. “It was a very special year for us especially in these circumstances. During the MCO we discovered young entrepreneurs and young individuals who were breaking the mould and starting their own businesses because of the situation”.

BMW made it a point to work with these individuals and organisations, having them set up booths at their launches, while also delivering aid to the underprivileged.

During a panel discussion, industry creatives talked about filmmaking in the new normal and navigating the ins and outs of over-the-top (OTT) platforms.

“In terms of the ideation and creativity, you are limited so a lot of the time, because you can’t shoot, you have to use stock footage and figure out how do you make it interesting?” shared Tan.

“A lot of us were shooting at home, we got talents to film themselves, we sent the lighting and cameras to them and tried to direct them over video calls, that was the tough part, ” he added. 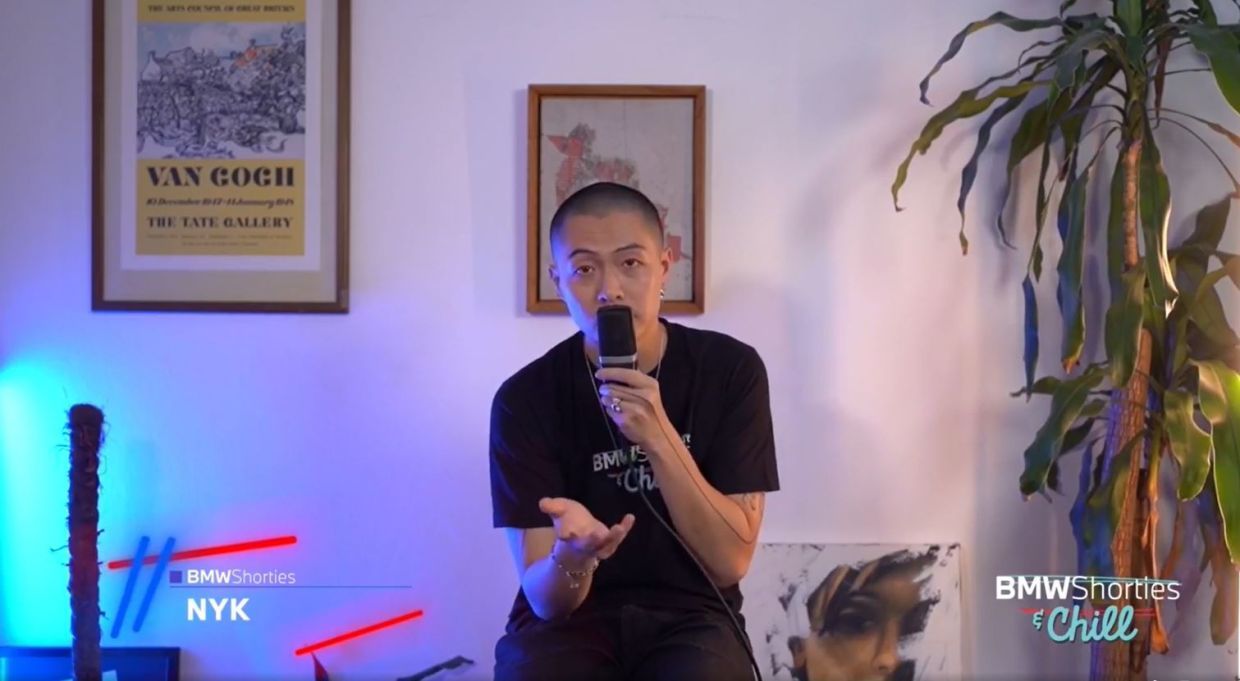 Artiste NYK performing from his location during the event.

Lina was in the middle of a shoot in a school when they got a call and immediately had to stop shooting for fear of violating regulations.

“We then rewrote the whole script and shot the whole telemovie during the Covid situation, ” she said, adding that they took advantage of the empty city streets.

“You’ll never, ever have a time in history where there’s empty streets, so I told Astro I’ll do a documentary but I can’t send my crew out to shoot, but somehow we did it, ” she said, adding, “Interestingly, without the physical human connection we became closer communicating online, we did things we never thought we could do.”

Khairil found that while it was a rough time in the industry, it was a good time to take advantage of the fact that there were no blockbuster films in the cinemas to compete with.

“We are living in a time when there are no blockbusters out in the cinema so you don’t have to compete. With my movie Kickflip I spent most of 2019 going the regular route of trying to get it to distributors and cinemas, which is kind of tough for a cheap black and white film about subject matter that not many people care about, ” he said.

“Putting Kickflip out on a platform like Mubi, is very different and very interesting. Because the cinemas are closed and there aren’t any blockbusters out, people are a bit more open to try new content, ” he added. Charles, whose BMW-funded film Rama-Rama was screened during the BMW Shorties & Chill event, pushed filming from May to July last year as this was a story she really wanted to tell.

“When we were shooting, the cases were not as high as they have been recently, and by that time we were allowed to go on set with the SOPs, ” she explained. “My script, the advantage was that it didn’t require big production and only had a small team, ” said Charles, whose short film Pace won the BMW Shorties in 2019.

The event also featured music performances by NYK and Seven Collar T-Shirt, followed by screenings of Pace and Rama-Rama. Rama-Rama tells the story of a little girl in a village in Sabah who decides to take part in a traditional beauty pageant.