Filepic of Fountains of Wayne, whose co-founder Adam Schlesinger (far right) has been hospitalised with the coronavirus.

Adam Schlesinger, a musician and Emmy-winning songwriter highly regarded for his work as a member of Fountains of Wayne and songwriter for TV's Crazy Ex-Girlfriend, has been hospitalised with coronavirus and is on a ventilator but is not in a coma, contrary to initial reports, his attorney of 25 years Josh Grier confirmed to Variety early Tuesday morning.

"He's very sick and is heavily sedated, as are all people on ventilators, but no one has used the word 'coma' to me," Grier said. Schlesinger has been in an upstate New York hospital for more than a week and is receiving excellent medical care, Grier noted, adding that doctors were reluctant to make predictions because so much about the disease remains unknown.

His Fountains of Wayne bandmate Chris Collingwood posted a note from Schlesinger's family stating that "his condition is improving and we are cautiously optimistic."

An EGOT contender, Schlesinger has been nominated for Oscars, Tonys, Grammys and Emmys and won the latter two awards.

At the 2018 Emmys, he was up for two trophies for his Crazy Ex-Girlfriend work and picked up one, winning in the outstanding original music and lyrics category for the song Antidepressants Are So Not A Big Deal (shared with the show's star, Rachel Bloom, and Jack Dolgen).

He is a 10-time Emmy nominee in all, five of those for Crazy Ex-Girlfriend, for which he served as executive music producer. Five more being nods for his contributions to the Tony Awards, Sesame Street and a Stephen Colbert Christmas special.

His Oscar nomination in 1997 was for co-writing the theme song for the Tom Hanks-directed film That Thing You Do!, one of his first successful forays outside the realm of his own music-making with Fountains of Wayne. He was also nominated for a Golden Globe at that time.

Fountains of Wayne, the band he co-founded with Chris Collingwood, earned two Grammy nominations in 2003, for best new artiste (many years after the band's actual recording debut) and for best pop performance by a group for the top 20 single Stacy's Mom, a cheeky MTV staple that became the band's biggest hit. His lone Grammy win, though, came for best comedy album for his work on A Stephen Colbert Christmas. – Reuters 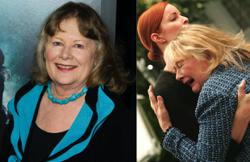