Nicole Lai is almost at the end of her performance and not one judge has turned their chairs around and picked the Malaysian singer. “I started to feel disappointed at myself. I thought it was the end of the journey.”

Lai, 30, is talking to StarLifestyle about her recent audition for the fourth season of Sing! China, a Mainland China reality singing competition.

The show sees auditionees singing for four judges - Harlem Yu, Na Ying, Li Ronghao and Wang LeeHom - but with their backs turned to them. The judges then turn their chairs around should the singing hopefuls impress them at any point during their performance.

Lai, who performed Bao Liu by Guo Ding, thought her time on Sing! China was over until LeeHom turned his chair for her at the final moments of her performance. “He saved me!” she says gratefully.

Lai is no stranger to participating in singing competitions. The Kepong native first came into the spotlight after winning local Chinese singing contest Astro Star Quest in 2012 before representing the country in Taiwan’s Million Star.

The singer, who has two Mandarin EPs under her belt, shares why she wanted to join yet another singing competition: “I don’t see it as a singing competition but as a good opportunity to gain experience in China. It’s good to learn from production crews, musicians and coaches who are from a different environment.”

Lai reveals how she came to be a part of the show. “Sing! China invited me to join the show in previous seasons but I couldn’t participate due to a scheduling conflict. This year, the show’s production team invited me again and I was ready.”

Though it is still in the early stages of the competition, Lai says she has learned a lot on her journey so far.

“It challenges you both physically and mentally. You need to always be ready and be at your best to face whatever situation comes your way. The production team may ask you to sing a certain song and you must be able to learn the song quickly.”

For example, when Lai took the stage during the blind auditions, she was the last contestant of the day, waiting on standby from morning till midnight.

Asked what strategies she hopes to employ for the next phase of the competition, Lai responds: “I don’t see music as something competitive. I believe music is a very subjective. I just want to do my best and enjoy the moment.”

Lai also talks about what she learned from LeeHom, who acts as a mentor for Lai for the rest of the competition, so far: “Never stop learning and enjoy the music.”

She adds the renowned Chinese-American singer-songwriter “is a very nice, sincere, talented and passionate artiste.” 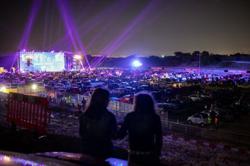 Social-distancing Greek style: shimmy and sing from your car