Hyun Bin, Son Ye-jin on remote-acting in 'The Negotiation'

With over a decade of acting experience under their belt, it’s almost surprising that Hyun Bin and Son Ye-jin, both 36 years old, met for the first time while making crime flick The Negotiation.

And it’s striking that the actor and the actress, who have respectively been imprinted in people’s minds as a fraudster in The Swindlers and a romance queen in Something In The Rain, transformed into a psychopathic villain and intellectual police in the new movie.

Hyun plays Min Tae-gu, a criminal who orchestrates a bloody kidnapping in Thailand, while Son plays Ha Chae-yoon, the best crisis negotiator in the Korean police, who gets called in to deal with the situation.

And due to the movie’s twisting plot, in which Min and Ha communicate through a monitor, the actors shared that creating remote chemistry through a screen was a real challenge.

Son Ye-jin cut her hair short to play a police officer in the movie.

“Since we had to act in different places through a monitor, not face-to-face, I was worried at first.

“It was my first time to act in such a way, and resorting only to the monitor and to his voice was hard. But I’m glad that we developed a decent chemistry,” said Son during a press conference in Seoul.

Hyun went on to praise his partner, saying, “Son is an actor who defeats all those hardships. She is capable of expressing so many sophisticated emotions with her eyes, and acting with her made me almost forget about the monitor.”

Director Lee Jong-suk commented that he chose Hyun and Son as the lead roles as he wanted to see how the seasoned actors would be in roles they haven’t tried before.

“I decided to cut my hair to play the police role. Nobody asked me to, and it was right before filming romantic movie Be With You, but I did so in order to show new sides of myself,” Son said. – The Korea Herald/Asia News Network

Hyun Bin , Son Ye-jin on remote-acting in 'The Negotiation' 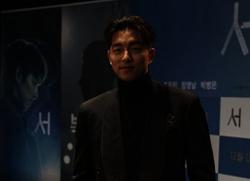