Izara Aishah stays in control of her own story

Izara Aishah’s career started with something out of her control. When she was 17, she was selected for Dewi Remaja 2009/10, a popular teen pageant competition. But there was one problem – she couldn’t recall signing up for it!

“My agency was the one that put me up for it. But I refused to be a part of it because doing a pageant was the last thing on my mind!” she said during an interview in Kuala Lumpur.

Somehow, her agency managed to talk her into it and Izara went ahead, believing the competition would help open doors for her in the local entertainment industry. After all, the pageant had seen the likes of actress Rozita Che Wan and singer Juliana Banos taking part in the past.

However, her enthusiasm was short-lived. “At one point, I wanted to quit. The main reason was that I wanted to focus on my Sijil Pelajaran Malaysia studies. I didn’t want to be made up to look beautiful. I didn’t want to answers pageant questions,” the 24-year-old actress said, adding that she was a tomboy at the time.

She was asked to reconsider her decision and Izara agreed to stay on if the pageant organisers agreed to let her have more flexibility.

“I just said I can’t be present for every activity that Dewi Remaja requires because I am going to be committed to my studies. They said OK and I got my way. Whatever I was asked to do, I just did the bare minimum.”

Nobody was more surprised than Izara herself when she was announced as first runner-up to winner Neelofa. Yes, that Neelofa.

“I don’t know (how that happened)! Maybe they liked how I was standing up for myself. But really, I didn’t believe it. There were other girls who definitely deserved it more than me,” Izara said.

After Dewi Remaja, acting offers did not come as easily as she had imagined. But instead of moping around doing nothing, she focused on obtaining a diploma in Performing Arts at a private university in Selangor.

“If anyone asks what got me into the entertainment industry, I would have to say Neelofa. She rang me up and asked if I wanted to become an extra on a TV show. I said OK.”

That one offer turned into more acting opportunities and eventually Izara scored her breakthrough with romantic comedy drama Vanila Coklat. The popularity of the show led to Anugerah Bintang Popular nominations for Popular New Actress and TV Actress.

It was also then that Izara realised she was not ready for the downside of fame.

“It was overwhelming. I felt like a child. I wasn’t thinking properly about a lot of things. People were trying to get me to do a lot of different things. People were fighting to form a fan club for me. I didn’t want to feel over-exposed. I decided that I had to try and control what I do.”

Izara chooses her acting projects carefully and often goes with something that she has never done before. She was a dancer in Showdown: The Movie, a kampung girl in Pilot Cafe, an aspiring singer in Sinaran and even took down zombies with Zizan Razak in KL Zombi.

This year, she had a memorable turn as Eddie, a member of the elite Special Action Unit in the action-packed J Revolusi.

For her latest film Kau Yang Satu, Izara said she wanted to try playing a heartwrenching role. Ultimately, she hopes for progress in terms of the way female characters are portrayed on screen.

“I have a feeling that the audience would love to see fewer female characters getting treated badly by their male counterparts,” she said.

In May, Izara had a rare misstep when a video of her wearing a sexy dress at a private event leaked, causing an online furore. Izara immediately issued an apology via her social media platforms.

“I had to apologise as I knew that I was wrong. That was also my way of controlling the issue. I didn’t want people to drag it on for too long. I hope people will forget about it over time,” she explained.

The actress, who constantly strives to stay in control of her narrative, is OK when unsavoury stories end up getting reported. “I don’t blame anyone. It is a norm when you’re in this industry. I just have to be careful.”

Throughout her career, Izara has never been one to talk about her private life. Case in point, she is marrying 27-year-old Adib Khalid, the CEO of Tune Studios later this year, but only offered this about the upcoming wedding: “I’m constantly thinking about it.”

And that is how Izara stays in control.

Izara Aishah stays in control of her own story 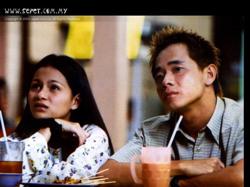