A staff member of the Greeley History Museum looks at a quilt decorated with swastikas in Greeley, Colorado. The quilt was probably made before 1930, according to the family and the Greeley Museums. Hitler adopted the symbol in 1935. Photo: AP

Sheetal Deo was shocked when she got a letter from her Queens apartment building’s co-op board calling her Diwali decoration "offensive” and demanding she take it down.

"My decoration said ‘Happy Diwali’ and had a swastika on it,” said Deo, a physician, who was celebrating the Hindu festival of lights.

The equilateral cross with its legs bent at right angles is a millennia-old sacred symbol in Hinduism, Buddhism and Jainism that represents peace and good fortune. Indigenous people worldwide used it similarly.

But in the West, this symbol is often equated to Adolf Hitler’s hakenkreuz or the hooked cross - a symbol of hate that evokes the trauma of the Holocaust and the horrors of Nazi Germany. White supremacists, neo-Nazi groups and vandals have continued to use Hitler’s symbol to stoke fear and hate. 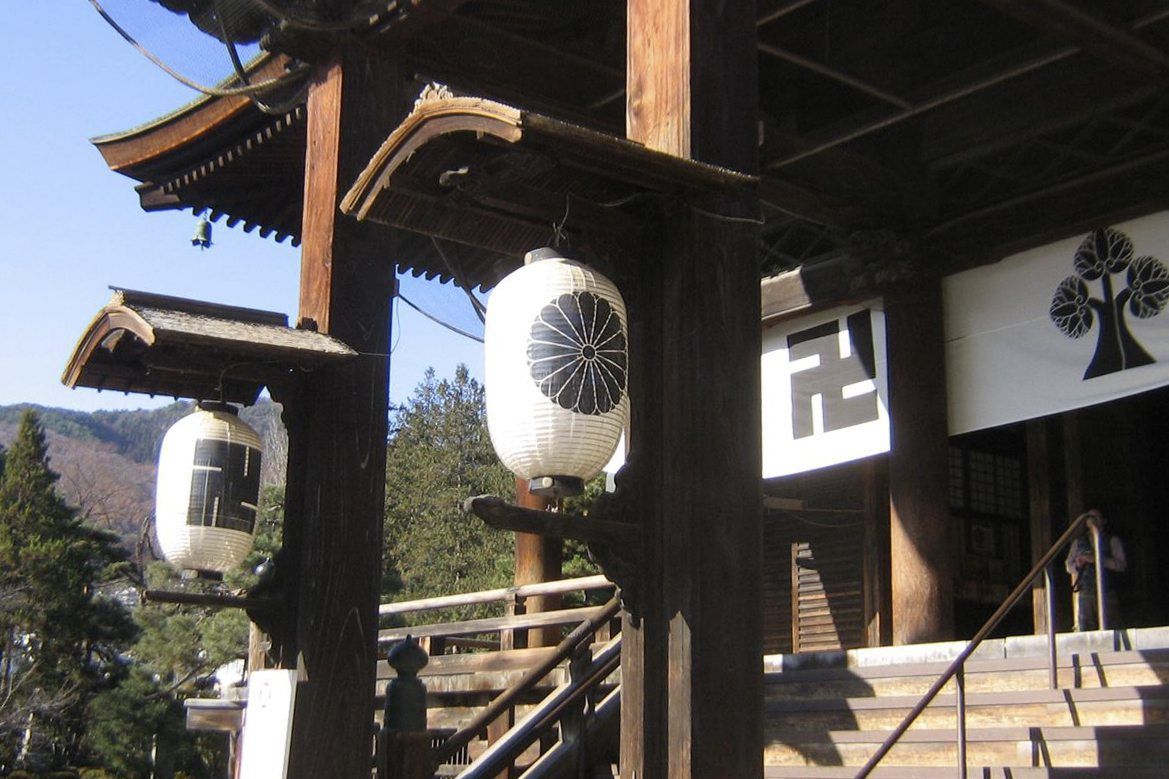 This photo provided by the Rev. TK Nakagaki shows the Zenko-jo Buddhist temple in Nagano, Japan, founded in 642 AD, Japan's first Buddhist temple. The swastika symbol is found in the temple's banners, paper lanterns, pillars, roof tiles and in the main shrine alongside the temple crest design of the hollyhock flower. Photo: AP

Over the past decade, as the Asian diaspora grew in North America, calls to reclaim the swastika as a sacred symbol became louder. These minority faith communities are being joined by Native Americans whose ancestors used it in healing rituals.

Deo believes she and people of other faiths shouldn't have to sacrifice or apologise for a sacred symbol simply because it is often conflated with its tainted version.

"To me, that’s intolerable,” she said.

Yet to others, redeeming the swastika is unthinkable. 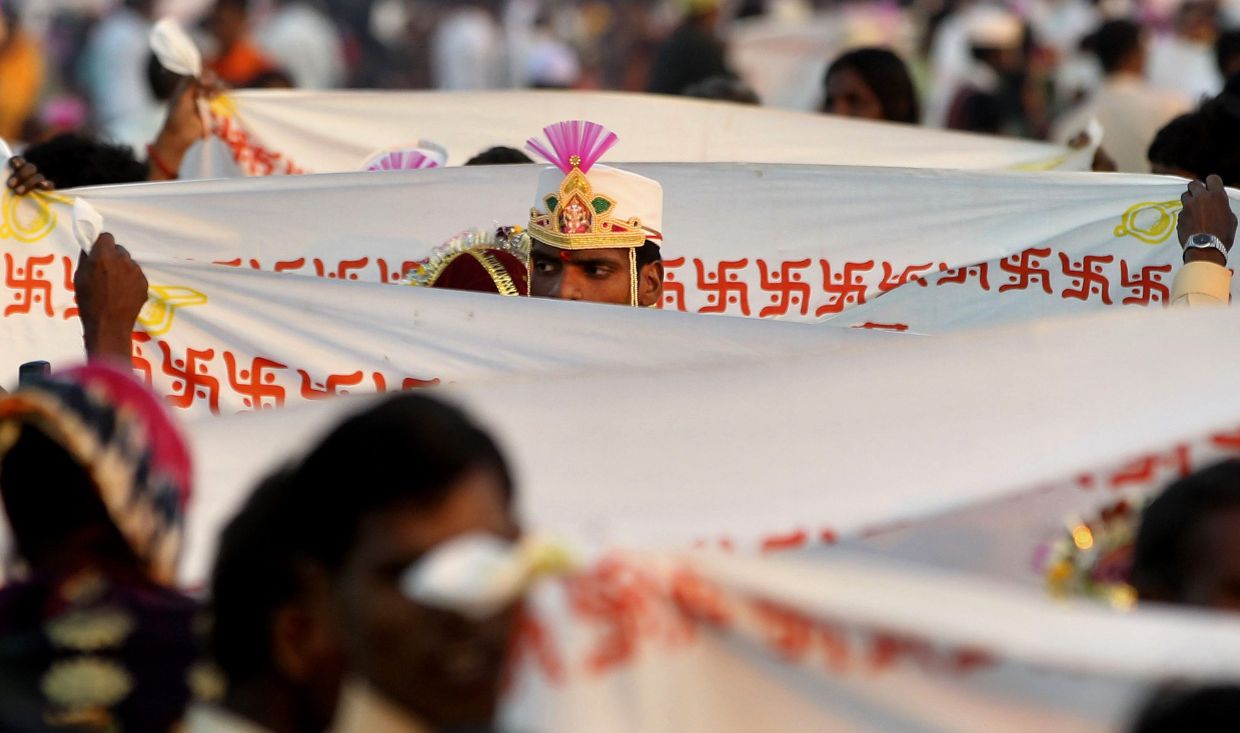 A groom stands behind a sheet bearing the Hindu swastika during a ritual at a mass wedding ceremony in Virar, on the outskirts of Mumbai, India. Photo: AP

Holocaust survivors could be re-traumatised by the symbol that represents a "concept that stood for the annihilation of an entire people” and the horrors they experienced, said Shelley Rood Wernick, managing director of the Jewish Federations of North America’s Center on Holocaust Survivor Care. Her grandparents met at a displaced persons’ camp in Austria after World War II.

"I recognise the swastika as a symbol of hate,” she said.

Steven Heller, author of Swastika: Symbol Beyond Redemption?, said it is "a charged symbol for so many whose loved ones were criminally and brutally murdered.” Heller’s great-grandfather perished during the Holocaust.

"A rose by any other name is a rose,” he said. "For many, it creates a visceral impact."

The symbol itself dates back to prehistoric times. The word "swastika” has Sanskrit roots and means "the mark of well being.” It has been used in Hindu prayers, carved into the Jains' emblem, marked Buddhist temple locations, and represented the four elements for Zoroastrians. 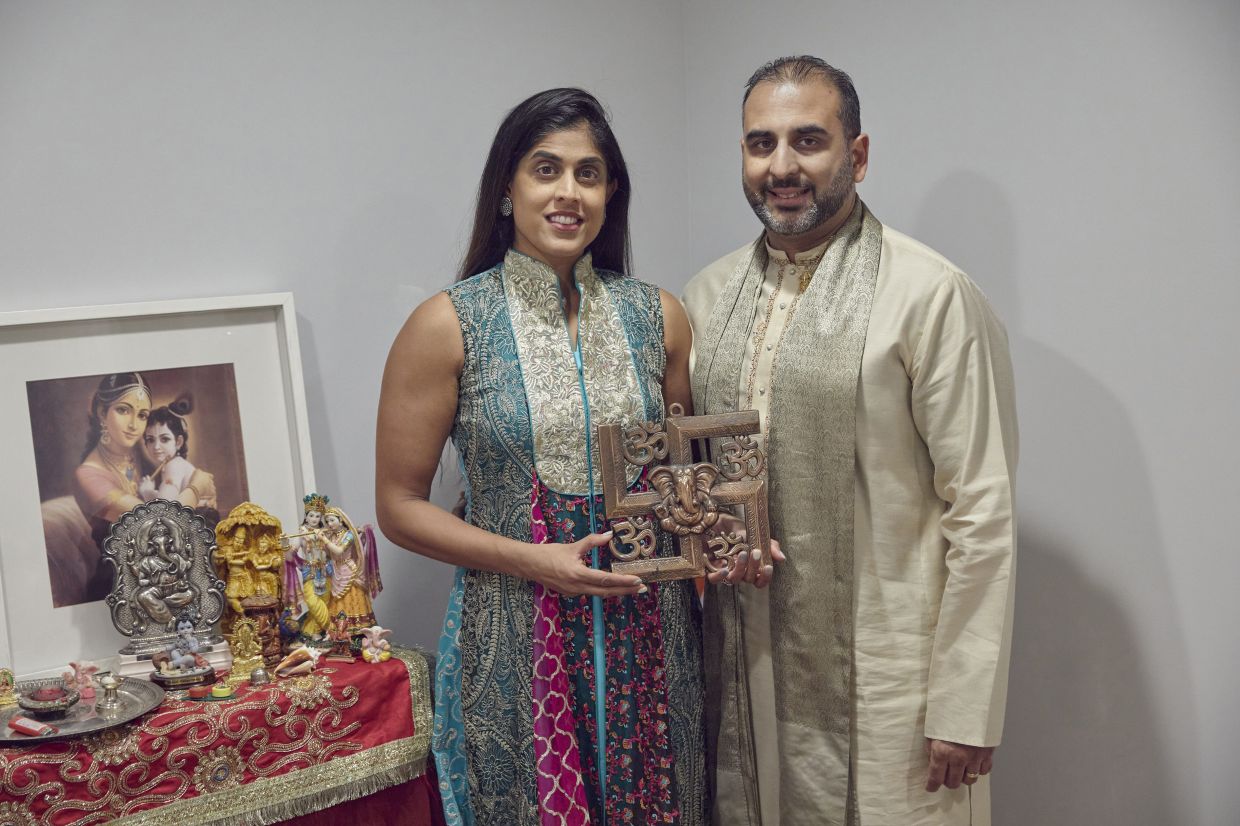 The symbol is ubiquitous in India today. It also has been found in the Roman catacombs as well as various places in Greece, Iran, Ethiopia, Spain and Ukraine.

The symbol was revived during the 19th century excavations in the ancient city of Troy by a German archaeologist, who connected it to Aryan culture. Historians believe this is what made it appealing to the Nazi Party, which adopted it in 1920.

In North America, in the early 20th century, swastikas made their way into architectural features, military insignia and team logos. Coca-Cola issued a swastika pendant. The Boy Scouts awarded badges with the symbol until 1940.

The Rev. T.K. Nakagaki said he was shocked when he heard the swastika referred to as a "universal symbol of evil” at an interfaith conference. The New York-based Buddhist priest thinks of swastikas as synonymous with temples.

In his 2018 book titled The Buddhist Swastika And Hitler’s Cross: Rescuing A Symbol Of Peace From The Forces Of Hate, Nakagaki posits that Hitler referred to it as the hooked cross or hakenkreuz. 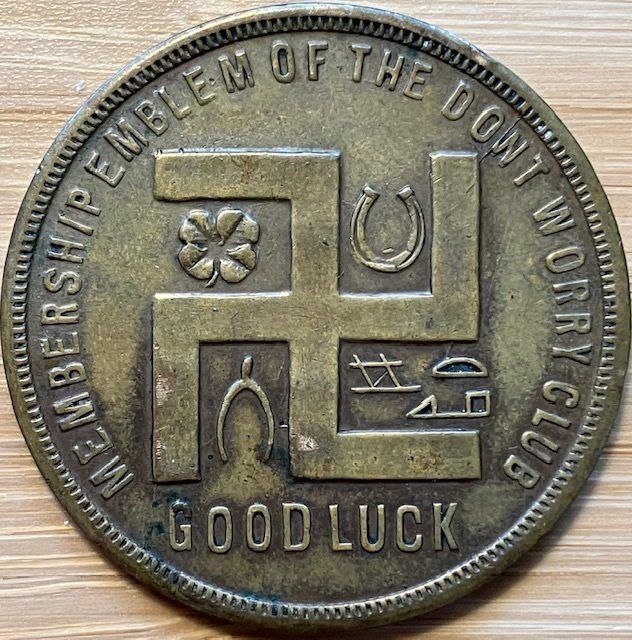 In this photo provided by Holocaust researcher Jeff Kelman, the swastika is seen on a coupon-type store token made before the Nazi Party adopted the symbol. This is part of Kelman's collection, which he says shows the 'regular and innocuous use of the swastika as a symbol of good fortune in the West, prior to the Nazi use of the similar-looking hakenkreuz.' Photo: AP

"You cannot call it a symbol of evil or (deny) other facts that have existed for hundreds of years, just because of Hitler,” said Nakagaki, who believes more dialogue is needed.

The Coalition of Hindus of North America is among several faith groups leading the effort to differentiate the swastika from the hakenkreuz. They supported a new California law that criminalises the public display of it, making an exception for the sacred swastika.

Pushpita Prasad, a spokesperson for the Hindu group, called it a victory, but said the legislation unfortunately labels both the sacred symbol and Hitler’s as swastikas.

It's led to self-censorship. Vikas Jain, a Cleveland physician, said his family hid images containing the symbol when they had visitors because of the lack of understanding. Jain says he stands in solidarity with the Jewish community, but is sad that he cannot freely practice his Jain faith. 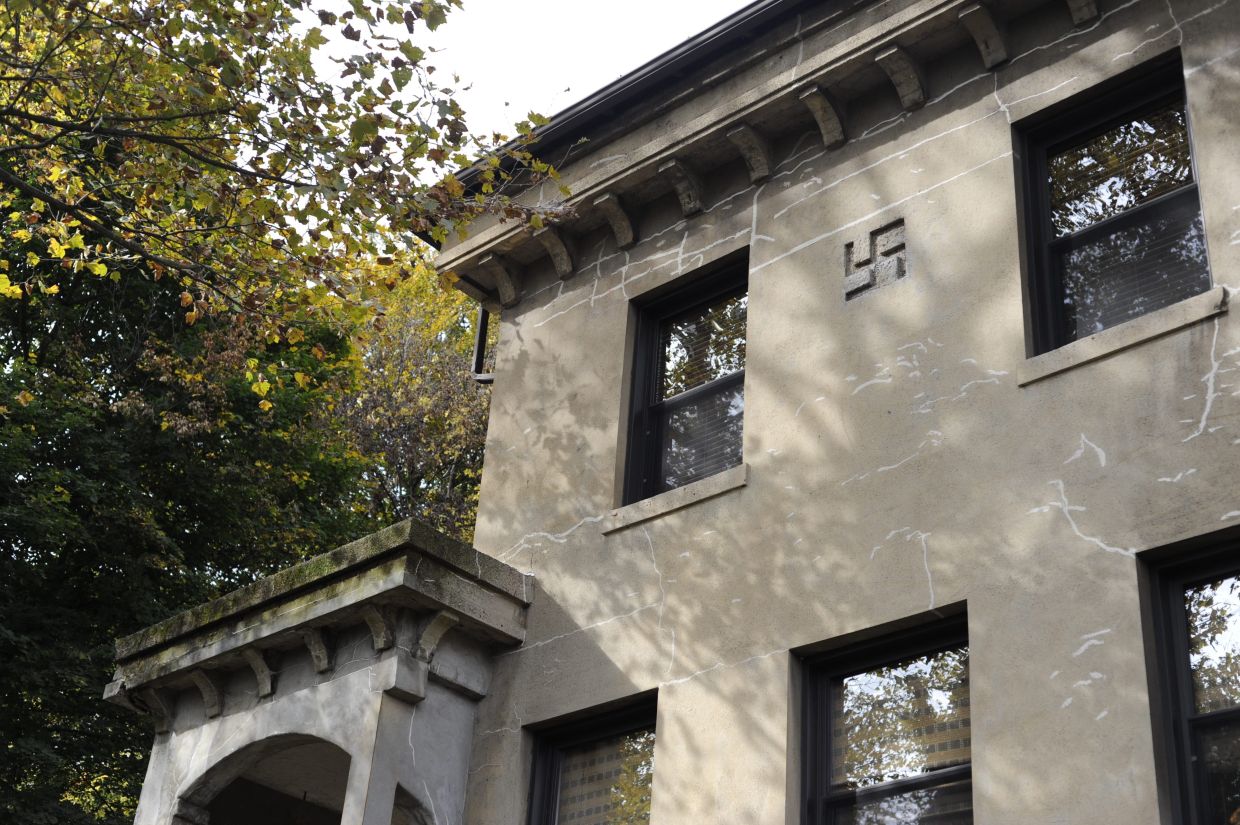 A home on Andover Terrace in the Oakland neighbourhood of Pittsburgh bears a swastika in the concrete above the entrance. Built in 1912, long before Hitler's rise, the swastika is a Hindu symbol of the sun and is also a symbol of good luck. Photo: AP

Before WWII, the name "Swastika” was popular in North America, including for housing subdivisions in Miami and Denver, an upstate New York hamlet and a street name in Ontario. Some have been renamed while others continue to carry it.

The Oregon Geographic Names Board will soon vote to rename Swastika Mountain in Umpqua National Forest.

The mountain's name, taken from a nearby ranch that used a swastika cattle brand, made news in January when hikers were rescued off the butte, said Kerry Tymchuk, the Oregon Historical Society's director. A Eugene resident questioned the name, spurring the vote, he said.

For the Navajo people, the symbol represents the universe and life, said Patricia Anne Davis, an elder of the Choctaw and Dineh nations. She said Hitler took a spiritual symbol "and made it twisted.”

In the early 20th century, traders encouraged Native artists to use it on their crafts. After it became a Nazi symbol, several tribes banned it. 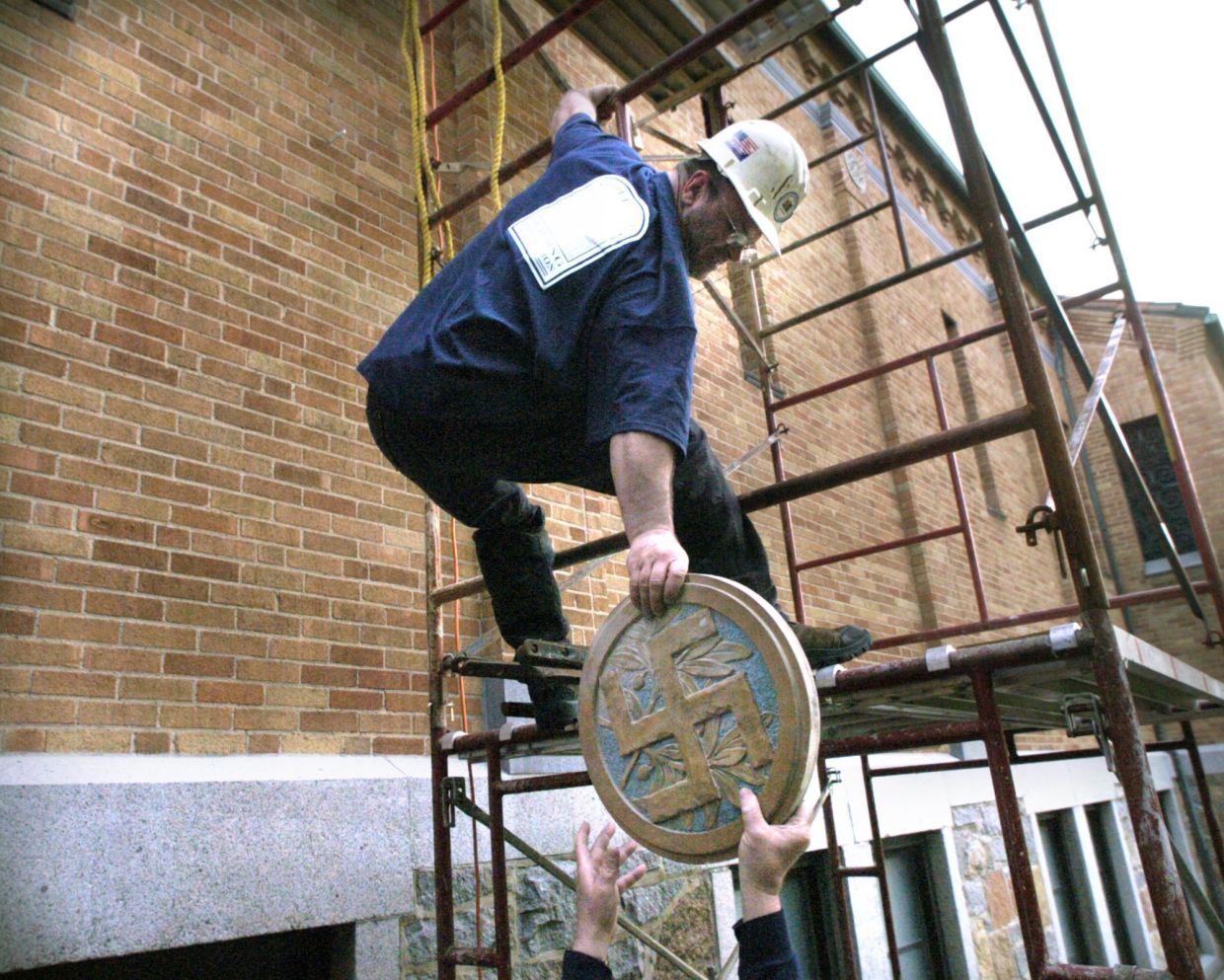 A builder lowers a Swastika symbol to the ground after it was removed from the north side of St Mary's Cathedral in St Cloud, Minneapolis in 2006. The symbols were installed when the cathedral was constructed in the 1920s. Photo: AP

"I understand the wounds and trauma that Jewish people experience when they see that symbol,” Davis said. "All I can do is affirm its true meaning. ...It’s time to restore the authentic meaning."

Jeff Kelman, a New Hampshire-based Holocaust historian, believes the hakenkreuz and swastika were distinct. Kelman, who takes this message to Jewish communities, is optimistic about the symbol’s redemption.

"When they learn an Indian girl could be named Swastika and she could be harassed in school, they understand how they should see these as two separate symbols,” he said. "No one in the Jewish community wants to see Hitler’s legacy continue to harm people.”

Greta Elbogen, an 85-year-old Holocaust survivor whose family members were killed at Auschwitz, said learning the swastika is sacred to so many is a blessing and feels liberating. Elbogen, born in 1938 when the Nazis forcibly annexed Austria, went into hiding in Hungary before immigrating to the US.

Elbogen said she no longer fears the symbol: "It’s time to let go of the past and look to the future.”

For many, the swastika evokes a visceral reaction unlike any other, said Mark Pitcavage, an Anti-Defamation League’s Center on Extremism researcher who maintains the group’s hate symbols database.

The ADL explains the sanctity of the swastika in many faiths and cultures, but Pitcavage said Hitler polluted the symbol: "While I believe it is possible to create some awareness, I don’t think that its association with the Nazis can be completely eliminated.” - AP 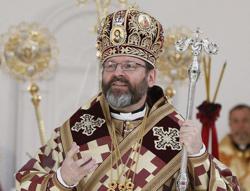