Now, for the first time, the full text of Wright's incendiary novel about race and violence in America, is published in the form that he intended, complete with his companion essay, “Memories Of My Grandmother.” Photo: AP

More than 60 years after his death, Richard Wright is again a bestselling author and very much in line with the present.

The Man Who Lived Underground, a short novel written in the 1940s and never published in full until this spring, is the surreal but credible story of a Black man who is tortured by police into confessing to a double murder he didn't commit. He escapes into the city's sewer system. Like an inversion of the American road novel or a tale of space travel, Fred Daniels inhabits a world outside the world, making up the rules as he goes along and seeing his old life in a new way.

At one point, he breaks into a real estate office that collects money from poor Black people. Daniels finds a wad of money, and helps himself to a typewriter, radio and cleaver, among other items.

"He did not feel that he was stealing, for the cleaver, the radio, and the money were on the same level of value, all meant the same thing to him, ” Wright observes. "They were the toys of the men who lived in the dead world of sunshine and rain he had left, the world that had condemned him.”

Released by the Library of America, an unofficial canon of the country's literature, The Man Who Lived Underground also includes the Wright essay Memories of My Grandmother and an afterword from his grandson, the writer-filmmaker Malcolm Wright. The novel has reached the bestseller lists of The New York Times and the independent booksellers' Indiebound among others, and has brought new attention to an author defined, sometimes to his detriment, by his famed debut Native Son.

Countless students have been assigned Wright's 1940 narrative about the poor young Black Chicagoan, Bigger Thomas, who in a state of panic murders a rich white girl, later murders his Black girlfriend and is tried and sentenced to death. The rare work by a Black writer to be featured by the Book of the Month Club, Native Son was among the most famous works of its time, and Bigger became a symbol of the damage done by a racist society.

But Wright's standing was challenged in the late 1940s by James Baldwin, then an emerging writer, who criticised Native Son as simplistic "protest” fiction and wrote that Wright had failed to present Black life "as a continuing and complex group reality.”

Kiese Laymon, whose works include the acclaimed memoir Heavy, is among the current writers who admire The Man Who Lived Underground and believe it will change Wright's legacy.

"It gives us a lot from Wright that we haven't seen before, ” says Laymon, who, like Wright, is a Mississippi native. "It's almost like a meta novel. Fred is experimenting, and you can see that Wright's desire is to discover and experiment.”

Charlie Braxton, a Mississippi-based poet and playwright, said his initial reaction to the book was anger at what happens to Daniels. But he was inspired by Wright’s use of a "psychological crime thriller” to serve "as a profound critique of racism/white supremacy and capitalism, ” and also touch upon organised religion and its role in "the exploitation of Black people.”

Wright worked on the book not long after Native Son came out, drawing on the true story of a Los Angeles man who lived for more than a year in the city's sewers; on memories of his Seventh Day Adventist grandmother; and on the Invisible Man films of the 1930s and 1940s, a theme which predates by several years Ralph Ellison’s classic novel Invisible Man.

Wright's publisher, Harper, turned The Man Who Lives Underground down, with one reader finding the author's depiction of police violence against Daniels "unbearable.” A shortened version of the novel, without Daniels' initial encounter with the police, was published in a 1944 story anthology and appeared in a collection of Wright's work that came out in 1961, a year after his death.

The revival of The Man Who Lived Underground began more than a decade ago, when the author's daughter and literary executor Julia Wright wanted to unearth some of his unpublished work. She was a prisoners' rights activist at the time, met with Mumia Abu-Jamal and other death row inmates, and followed closely the stories of police shootings of people of colour, and the dismemberment of James Byrd by a gang of white supremacists.

In 2010, Julia Wright was seated in "the comfortable, secluded, air-conditioned calm of the Beinecke Archives where my father’s manuscripts are housed at Yale University.” She said that she "came across a long version of the short story I knew so well but augmented by the 50 pages on police brutality. Bringing the whole work to light was not only timely, it was a cure against the physical dismemberment suffered by the James Byrds of our dark history.”

She discussed a reissue with Library of America, which had already published two volumes of her father's work, and renewed her push last summer after the murder of George Floyd.

"We all understood that the publication was a priority, ” she said, adding that her father would have been pleased by the book's reception.

"He would have chuckled at this poetic justice. Sat and smoked his pipe for awhile without any complacency for America’s immediate future. And, true to himself, he would have soon reached out for some paper to jot down a new ‘white heat’ idea.” - AP 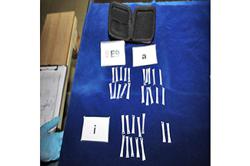 Everything in New York is bigger, even its Van Gogh exhibit
David Bowie painting from Canadian donation store up for auction
Need an inspiration or a distraction? This 'typewriter' can be both for fatigued writers
This inspiring book touches on disabilities, accessibility and inclusion
Language extinction threatens cultural and traditional medicinal heritage
Wallace and Gromit statue coming to creator's home town in England
Malaysian artist captures 'new normal' of life during pandemic in new comic book Premium
Digital archive: US Library of Congress gets health workers' audio Covid diaries
Arts documentary revisits a plucky tale of drums, masks and pandemic life
Robot art: how do people decide whether something is real or fake?