Just give these photographers a box and they will give you a picture. At least, that is what it looks like to the average passer-by.

Box cameras, essentially a camera and a darkroom in one, are usually homemade and might look every bit like a humble photography tool.

But for those who work with them, they are a window to the world.

Kuala Lumpur-based photographer Jeffrey Lim is one such person, having built and used his own box cameras for years now.

He is one of the 54 photographers from around the world – and the only one from Malaysia – whose works are featured in Box Camera NOW, a newly-released publication by Austria-based publishing house Fraglich.

Lim has six portraits in this book, taken in various locations – Perak, Taiwan and Japan – while working on his Kanta Box Kamra and Kanta Portraits projects.

“Box camera photography has been steadily gaining traction in recent years. I think a publication like Box Camera NOW is something that has been a long time coming, ” says Lim in a recent interview.

“Living in the digital world means that we have been slowly losing touch with the old ways of preserving memories, through artefacts such as photographs. We live in such an instant gratification world, we don’t have as many tangible keepsakes these days. This book will help more people understand box camera photography and encourage appreciation of this art form, ” he adds. Lim’s first print from a trip to Kampung Petoh in Kuala Rompin, Pahang in August. The man in the print is Horas of the Jakun tribe. Photo: Jeffrey Lim

The first photograph he took with his self-built box camera was in 2014. Since then, he has travelled to many far-flung places around Malaysia, as well as abroad, in his exploration of the concept of identity and the social constructs that we live by.

He goes to where the stories are, often finding himself in the middle of nowhere. He meets people to hear their tales and get an insight into their lives. And with him, he brings his trusty box camera.

“It is like an exchange: I interview the people I meet and then I make a portrait of them that they can keep. It is always a magical moment when they see themselves gradually appear on a piece of paper, ” he relates.

Lim’s love affair with the box camera started about a decade ago, when he saw a documentary by Austrian photographer and archivist Lukas Birk and Irish ethnographer Sean Foley, on the Afghan Box Camera Project.

He got in touch with them and learned now to build his own camera.

“The original design was very complex, so I modified it and built a Malaysian version of it. I made these changes also because I wanted to use local waste material, and not buy new, ” shares Lim. 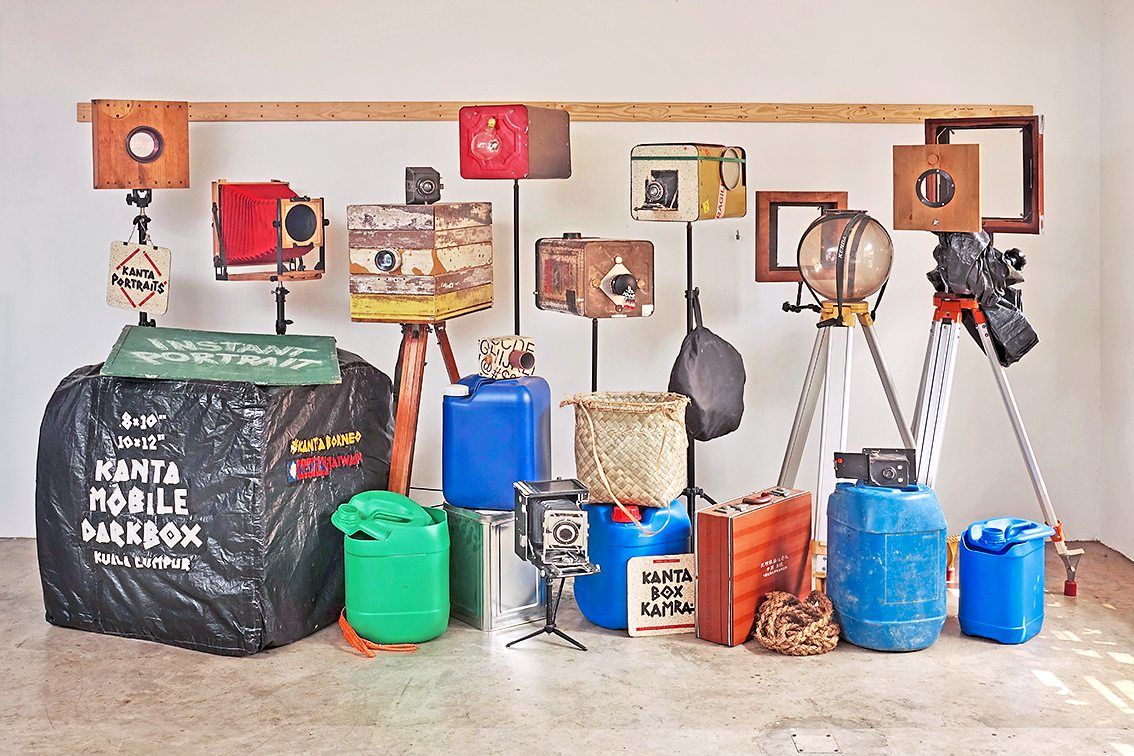 ‘The new range of cameras I’m developing will have multi-roles with detachable sections for portability and with the ability to be handheld, using waste industrial materials found within indigenous communities and rural plantations, ’ says Lim. Photo: Jeffrey Lim

Box cameras are known by different names around the world, like Afghan box camera, Brazil’s lambe-lambe, Cuban polaroid and the kamra-e-faoree, just to name a few.

It was traditionally used by photographers to produce instant identity portraits, not unlike how we do for our driving license or passport photos these days.

The box camera is fully manual and does not require electricity.

“I make mine from discarded tin cans and waste wood. When I first heard of the box camera, it caught my attention because I could make it out of things that are all around me. Without the need for electricity to run it, I could bring it everywhere with me and be able to produce photographs, ” says Lim.

Pandemic or not, he has been busy with multiple projects, one of which is The Invisible Future, Facing The Visible Past, at Lightbox Photo Library in Taipei. Co-curated by Lim and writer/poet Bernice Chauly, this exhibition aims to introduce photographic art, culture and history in Malaysia to Taiwanese audiences. 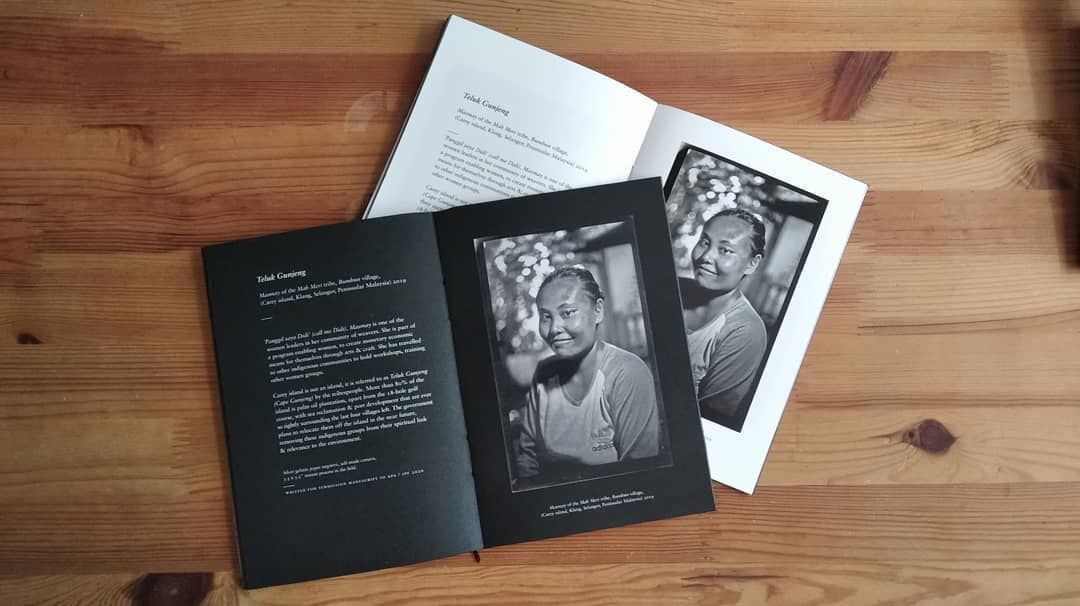 A mockup of the 'Kanta Manuscript 20' photobook featuring a selection of 20 portrait prints made during the Kanta Portraits project between 2015 and 2019. Photo: Jeffrey Lim

It traces the evolution of the image, from pre-colonial Malaya days and beyond, and examines the various forms of “seeing” through oral traditions, drawings, carvings and photography.

The exhibition features around 120 books, including John Thomson’s The Straits Of Malacca, Siam and Indo-China, Hedda Morrison’s Life In A Longhouse And Orang Asal – A Photographic Introduction To The First Peoples Of Malaysia. Also featured are four photobooks of Malaysian photographers, including Shima Sidek and Ronnie Bahari (both from the Orang Asli community), Fitri Jalil and Steve Tan (who owns the only walk-in wet plate saloon in Malaysia). The books were produced by Lim.

The Invisible Future, Facing The Invisible Past exhibit runs from Nov 17 to Dec 19, followed by a series of study groups, guided tours of the exhibition and a curators’ talk.

Last month, some of Lim’s works as well as his main camera, were on display at the Taipei Fine Art Museum, as part of the Nusantara Archives in the The Secret South exhibition. Plans are in the works for Lim to have a demonstration and instant portrait booth at Ilham Gallery, where the gallery’s photography exhibition Bayangnya Itu Timbul Tenggelam is slated to run until the end of the year.

However, the gallery is closed during the conditional movement control order, which is expected to continue until Dec 6.

Tentatively on Dec 12, Lim will be setting up a portrait booth for the public at the Tropical Spice Garden’s Spice Fam event in Penang. He will be joined by two other box camera practitioners: Nurul Huda Mat Rusdi from Selangor and Antoine Loncle from Penang.

Together, they make up the “Box Camera Trio, Malaysia” and are planning to set up a group for people who build box cameras.

In the same month, he will be releasing Kanta Manuscript 20, a compilation of 20 portrait prints of indigenous people made between 2015 and 2019 for his Kanta Portraits project.

This is intended as an introduction to the collection of photographs and studies made over the span of the project.

In April next year, Lim will be part of the Luminous Shadow performance at the Taiwan International Festival of Arts (TIFA) in Taipei.

It has been a busy year for Lim, despite the challenges and restrictions due to the pandemic. But he believes that it is important to keep moving forward, no matter what life throws at you.

"I think the few things that kept me going were my love for always learning, being resilient, having a positive outlook and being able to readapt. It has been really hard, but life is a constant journey, it is all about how one keeps moving and being fluid.

"There are many opportunities out there and I have been looking at more collaborations. When we work with others, we are able to draw on each other's strengths and innovate together. Next year will see me doing more exploration locally, and perhaps some new programmes and workshops on skill sharing," he concludes. A mockup of the 'Kanta Manuscript 20' photobook featuring a selection of 20 portrait prints made during the Kanta Portraits project between 2015 and 2019. Photo: Jeffrey Lim

'Box Camera NOW' by Lukas Birk compiles a selection of works by 54 photographers from 21 countries. Jeffrey Lim, who has worked with the box camera for about a decade, is the only Malaysian featured in this book. Photo: Box Camera NOW

A photograph by Lim featured by Box Camera NOW.

Lim at the Balai Adat of Cunex in Perak. This village is located at one of the Temiar tribe’s most sacred sites. The community there has been setting up blockades against state-sanctioned logging. Photo: Alyna Tai

Lim’s first print from a trip to Kampung Petoh in Kuala Rompin, Pahang, in August. The man in the print is Horas of the Jakun tribe. Photo: Jeffrey Lim

‘The new range of cameras I’m developing will have multi-roles with detachable sections for portability and with the ability to be handheld, using waste industrial materials found within indigenous communities and rural plantations, ’ says Lim. Photo: Jeffrey Lim