For conservation, a concoction of alcohol and citronella oil is applied to preserve lontar manuscripts and fend off insects. Photos: The Jakarta Post/Asia News Network

A young man carefully tended a small campfire on which scores of candlenuts were being grilled. Their aromatic fragrance wafted into the adjacent hall, where dozens of youths were busy cleaning old 'lontar' (palm leaf manuscripts).

It was a scorching day in Bulian, a village some 82km north of Denpasar, Bali in Indonesia. Yet, the hall’s high ceiling and the light breeze coming down the nearby hills provided some relief from the heat.

Moreover, the hovering scent of the two important substances in cleaning up lontar, burned candlenuts and citronella oil, had created a soothing ambience quietly embraced by the youths.

“First, using a brush we dust off each leaf of the manuscript. Then we thoroughly scrub them with burned candlenuts. Their oil will rejuvenate the pale leaves while the charred surface of the burned candlenut will lend another layer of black colour to the letters incised into the leaves, thus making the text more legible, ” explained Ida Bagus Ari Wijaya.

Ari Wijaya is one of the leaders of Penyuluh Bahasa Bali (Balinese Language Educator) for Buleleng regency.

Founded in 2006 by the Bali provincial administration Penyuluh Bahasa Bali is tasked with conserving, developing and promoting Balinese language, literary works and alphabet at the island’s 716 villages.

The educators were recruited from university graduates majoring in Balinese or Old Javanese languages. One educator is assigned per village.

“The leaves are then cleaned using a soft cloth. The last stage in this conservation process is applying a concoction of alcohol and citronella oil onto them. This concoction will prevent the manuscripts from being damaged by the insects and rodents as well as prolong their shelf life, ” he said.

Properly stored and cared for, lontar manuscripts can last for centuries. Unfortunately, most of the lontar manuscripts kept by Balinese families have not been maintained properly, resulting in irreparable damage to the physical text and, more importantly, the loss of valuable knowledge contained in the manuscripts. 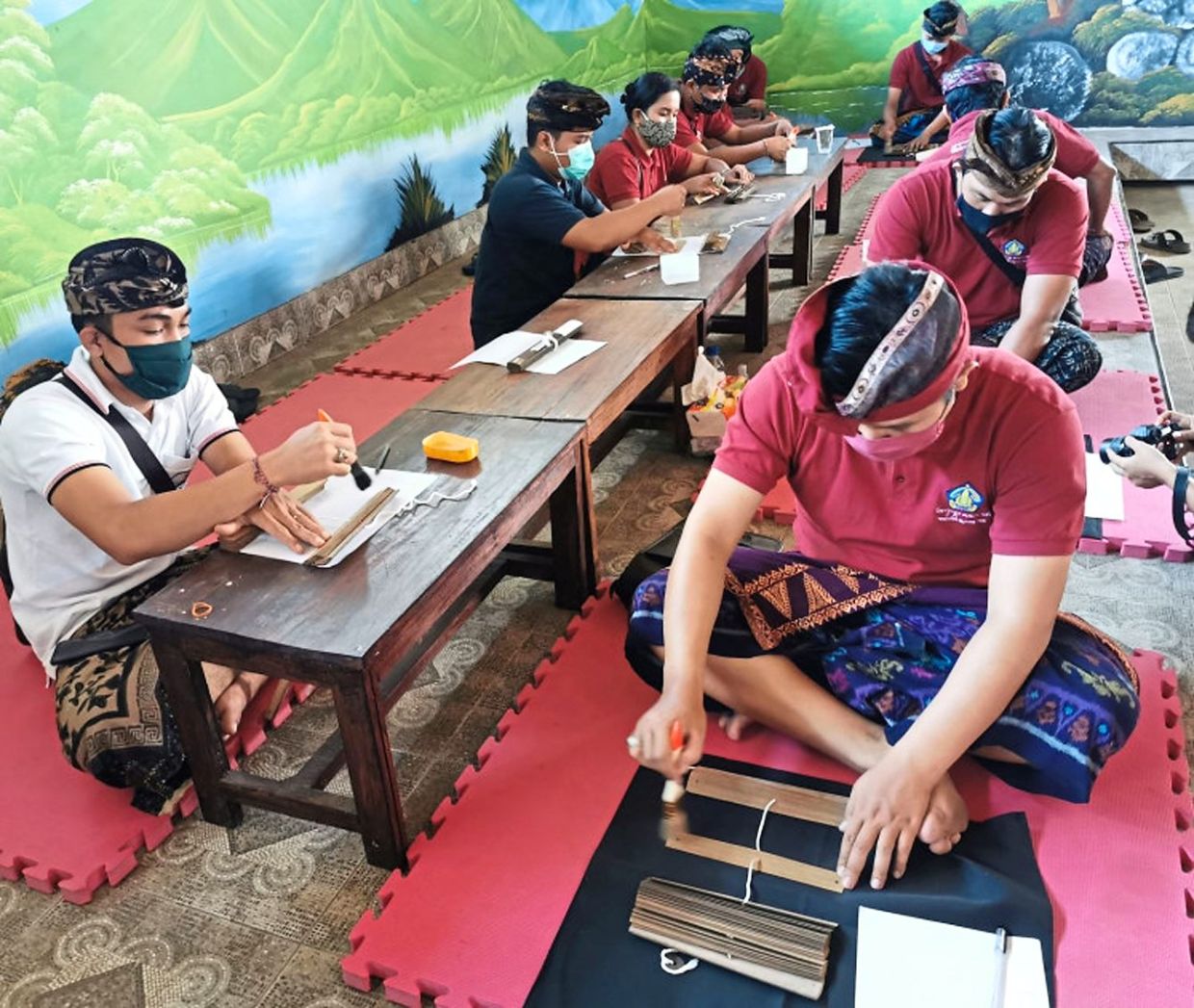 Members of Penyuluh Bahasa Bali work together to clean up lontar manuscripts owned by residents of Bulian.

Lontar expert Sugi Lanus witnessed first-hand this tragic phenomenon as he visited families along the coast of Buleleng in search of lontar manuscripts.

From Banjar in the West to Kubutambahan in the East, hundreds, probably thousands of lontar manuscripts have met an unworthy end due to lack of knowledge about proper maintenance or simply because of a misconception about their roles and functions.

“A great number of lontar manuscripts were stored for decades inside wooden boxes. The families never opened the boxes because they considered the manuscripts as sacred objects. When we finally got approval to open them, well, we found only fragments and debris of lontar. Humidity had worked in unison with termites, moths and rats to destroy them, ” he sighed.

Sugi was the founder of Hanacaraka Society, an organisation dedicated to the promotion of and research on lontar.

In cooperation with Penyuluh Bahasa Bali, Hanacaraka Society now organise lontar events in villages across Bali to teach the locals practical ways of conserving lontar manuscripts as well as educating them on the best way to treat a manuscript: by reading and sharing its knowledge instead of locking it inside a box.

“We bring our lontar manuscript collection and read parts of it to the participating villagers. By doing so, we want to show them that lontar manuscripts are no different than books, they are meant to be read, ” said Sugi.

“They will see that lontar manuscripts could be brought to an ordinary meeting, be read and discussed in public and be shared together. Surely, the manuscripts should be accorded a proper respect but in no way they should be venerated as a sacred and secret object that must be kept hidden away.” 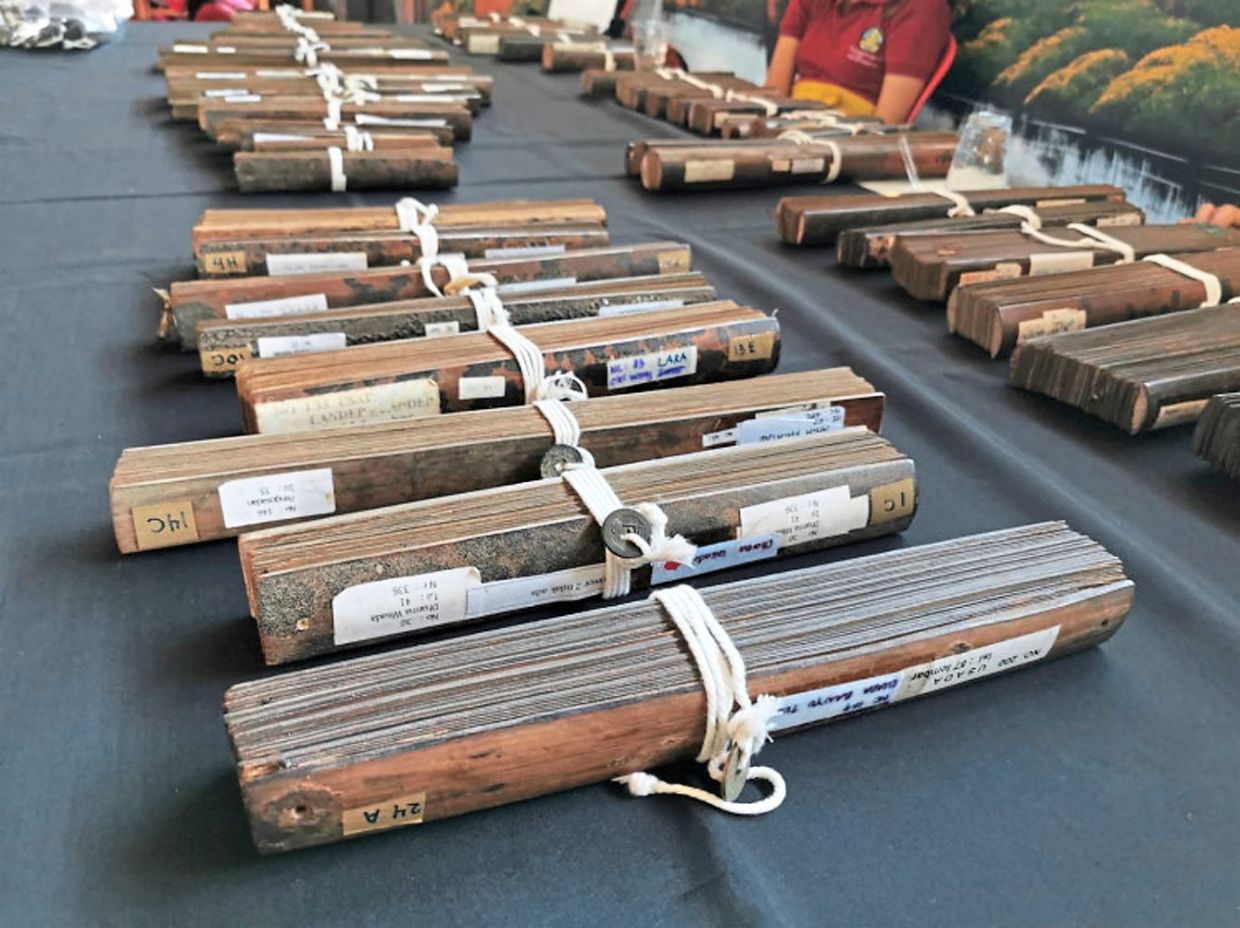 Sugi brought 110 lontar manuscripts to the event in Bulian. Most of them are Usada texts that deal with traditional medicine and herbal concoctions, an important knowledge for the Bulian residents, who are in the process of developing their village into a herbal tourism destination.

In his conversation with the village’s elders, leaders and youths, Sugi also reminded them about the historic importance of Bulian as one of the oldest villages in Bali. Two of Bali’s ancient rulers, the 10th century’s Tabanendra Warmadewa and the 13th century’s Adi Dewa Lencana, spent their last years in the village.

“The village also houses some of Bali’s most important inscriptions, suggesting that learning and writing have a long history here, ” said Sugi.

By that time, participating members of Penyuluh Bahasa Bali had finished cleaning up the lontar manuscripts owned by the Bulian residents. They then began filling in the lontar identification sheets detailing the manuscripts’ physical dimensions, the authors, the owner, as well as a brief summary of their respective contents.

“One copy of the sheet will be kept at our archive and another copy will go to the owner, thus providing them with basic information on the manuscripts in their possession, ” said Ari Wijaya.

As of today, Penyuluh Bahasa Bali has completed the identification process of 3,160 lontar manuscripts in 66 villages across Buleleng. But their work is far from over.

“We need to transliterate the manuscripts into the Latin alphabet, translate the content into Indonesian as well as digitalise the original manuscripts, ” said Sugi.

“It is a towering task but fortunately we have a group of passionate and dedicated youths to handle it.” – The Jakarta Post/Asia News Network