Don't know what else to do at home? KLPac is presenting its #lockdownart project where the public an submit selected monologue works. Photo: KLPac

Every Malaysian - to the best of each one's abilities - is taking the recent announcement by the Government to extend the movement control order (MCO) to April 14 in their stride. If anything, the decision has brought out the more innovative and creative side of Malaysians to get by this "stay calm and stay home" period.

Even the performing arts community is readily showing that you do not need a physical stage to put on a show. Like Shakespeare himself put it: all the world’s a stage. And with the help of social media, theatre companies have gone online and DIY style to engage with Malaysian audiences in a way they were not able to before.

Last week, the Kuala Lumpur Performing Arts Centre (KLPac) started their #lockdownart project. The project looks to be continuing longer now. KLPac aims to inspire Malaysians to get in touch with their creative side in these trying times via its Instagram page.

“We are going through some tough times as our country tries to cope with and heal from Covid-19. With the extended restriction, it might be a stressful period for a lot of people.

“I think in the midst of it all, engaging people through social media to create art can perhaps serve as a sense of relief. What is more important is that making art together while apart may create a sense of community. Even though we are on our own coping with our own current situations, we are going through all of this together, ” says Ho Lee Ching, KLPac’s actor/director-in-residence, who is heading the #lockdownart project.

So if you’re already getting restless at home or you’ve run out of Netflix shows to watch, maybe it’s time to bring out your theatrical side.

Here’s how this works. Head over to KLPac’s Instagram page and pick one of the three monologues provided.

Give it your own artistic twist and post a video of your performance on Instagram. Nominate five friends to participate in this initiative and tag KLPac in your post.

If dancing is your thing, post a 45-second (or less) dance video based on the instructions given. Don’t worry, three song choices would be provided. A combination of radio drama and micro-fiction, Drama Kilat is a timely tribute to the days of radio theatre.

"Think of it as a TV series. There might be 8,13 or 26 episodes in one set. It depends on the situation but basically it is to keep people entertained at this period," says Ridhwan.

New episodes will be released in the evenings in the coming days with no fixed time or dates at the moment.

Joining the virtual fray is theatre playwright/director Fasyali Fadzly with the Teater Di Rumah project. A collaboration between Fasyali’s theatre company Main Theatre and arts space Serambi Karya Bellamy, Teater Di Rumah also invites anyone at home to post a short recording of themselves on any social media platforms, performing any piece from a play or a movie.

“This is moral support for freelance artists who are affected during this period of time since most shows are cancelled and they don’t have acting jobs at the moment. This is a project for people to have fun. After so many days staying at home, I'm getting bored watching TV and surfing the Internet,” says Fasyali, 36.

With Teater Di Rumah, you can do a monologue or two-hander or even a group scene (just make sure to practice social distancing). You are free to interpret the scene of your choice (make sure it is less than two minutes) however you want. Don't forget to tag Main Theatre when you post a work. 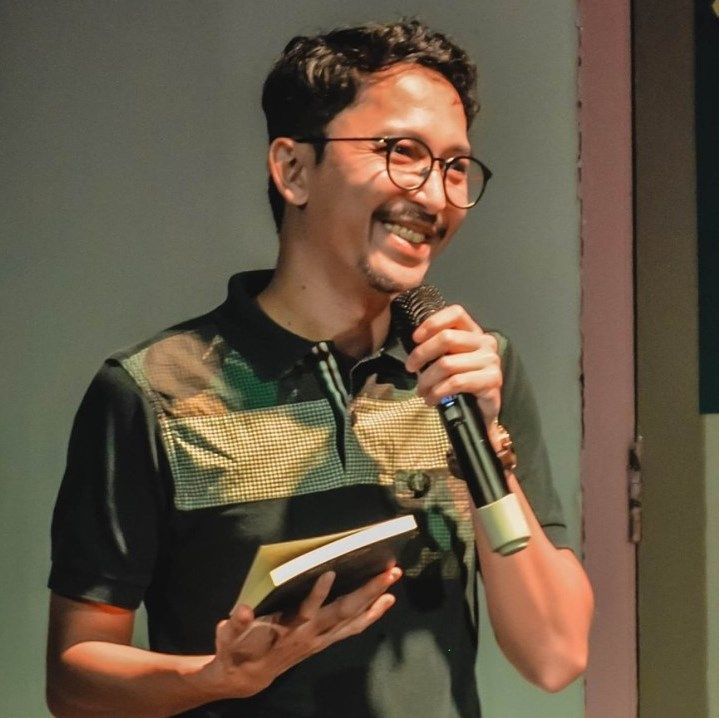 'This is something to help people overcome their stress and tension at home,' says Fasyali about Teater Di Rumah.

Have you ever wondered how the performing arts industry works? Well, this might be the best time to find out as a line-up of actors, playwrights, directors and academician have taken over Manamana Productions’ Instagram page recently.

Called "Ask An Artist", the project by the relatively new theatre production company will see practitioners going live on Manamana’s Instagram page to discuss the roles they play in the industry, how they began, and help answer industry questions.

“Ask An Artist began as a spontaneous idea about what kind of content we could create under the MCO, what we can learn from each other and how to help those who have lost work. This exercise also helps to fulfil needs for some semblance of socialising, ” says Manamana’s founder Rosheen Fatima, who acted in Kandang (2019), an adaptation of George Orwell’s Animal Farm.

“Artistic content is more complicated at the moment, but conversations can still happen to ensure that the community relationships remain and are possibly strengthened when we need it the most. Manamana is drawn to community work, and this project is just a different form of that, ” she explains. “I feel it is important to have a diverse range of roles from the scene, and to not focus only on those who appear on-stage or screen. The range of roles chosen somewhat reflect the diversity of jobs that our industry supports, ” says Rosheen, 36.

Mamamana is open to the idea of Ask An Artist being extended through next month.

Bi-monthly creative platform, Riuh In The City, which normally takes over different venues on weekends, filled with visual art, will now enter your homes via its Riuh In Your Home initiative.

Tailored to be an intimate session with the featured artist for the day, Riuh In Your Home will run every night at 9pm till March 31.

“To support our local performers whose livelihoods are affected in this time due to the cancellation of events and gigs, we will be paying different artists to perform on Instagram Live every night this week, ” says Marissa Wambeck, Riuh’s deputy manager.

Various personalities will take over Riuh’s Instagram on a whole range of topics, such as local music or movies, productivity, wellness and food, to name a few.

Riuh In Your Home is also also expected to be extended to keep this spontaneous platform going until the MCO ends. On a multidisciplinary front, tune in to the Terang series on Facebook.

This series is organised and hosted by Johor-based Broadcast Rakyat (BR), an online interview platform that touches on the arts and current issues. It ends its first series on March 25. But arrangements are being made to continue the series during the MCO extension.

According to BR’s founder Cabi Maarof, Terang, a combination of Malay words temasya and rangkaian, is “an online festival that celebrates art beyond the boundaries of space, utilising the Internet to bring creatives together during the MCO.”

The live programme will run from 4pm-11pm today with an assortment of topics such as hobbies, education, visual arts, music and more. Participants come from different parts of Malaysia and diverse fields of arts. Among the participants are poet Lily Cartina, art practitioner Tok Rimau and even two musicians from Romania and Italy.