American artist Judy Chicago had a glint in her eye – as well she might – as she posed in front of a giant golden banner embroidered with the legend,"What if women ruled the world?"

At 80 the feminist pioneer pulled off the coup of her career Monday by planting a massive temple to the mother goddess on the lawn of one of art's greatest machos, the sculptor Gustave Rodin.

But that was not the best of it.

One enters the 15m high shrine to "The Female Divine" behind the Rodin Museum in Paris through the deity's tastefully stylised vulva.

On Monday, it hosted half of Hollywood and an embarrassment of pop stars for Dior's haute couture fashion show.

"We walk in the way we came out," laughed Chicago, resplendent in a burnished gold Dior Bar trouser suit from the collection, her hair tinted to match the imperial purple of the carpet of "one thousand flowers" she had made for the interior.

"Everybody wants to go back to the womb," she added, joking about the space she had created inside the goddess.

"Given what is happening in the world, it is a totally understandable impulse, don't you think?" said the artist, who made her name 40 years ago with the now iconic The Dinner Party, three tables set for 39 great but often forgotten women from history. 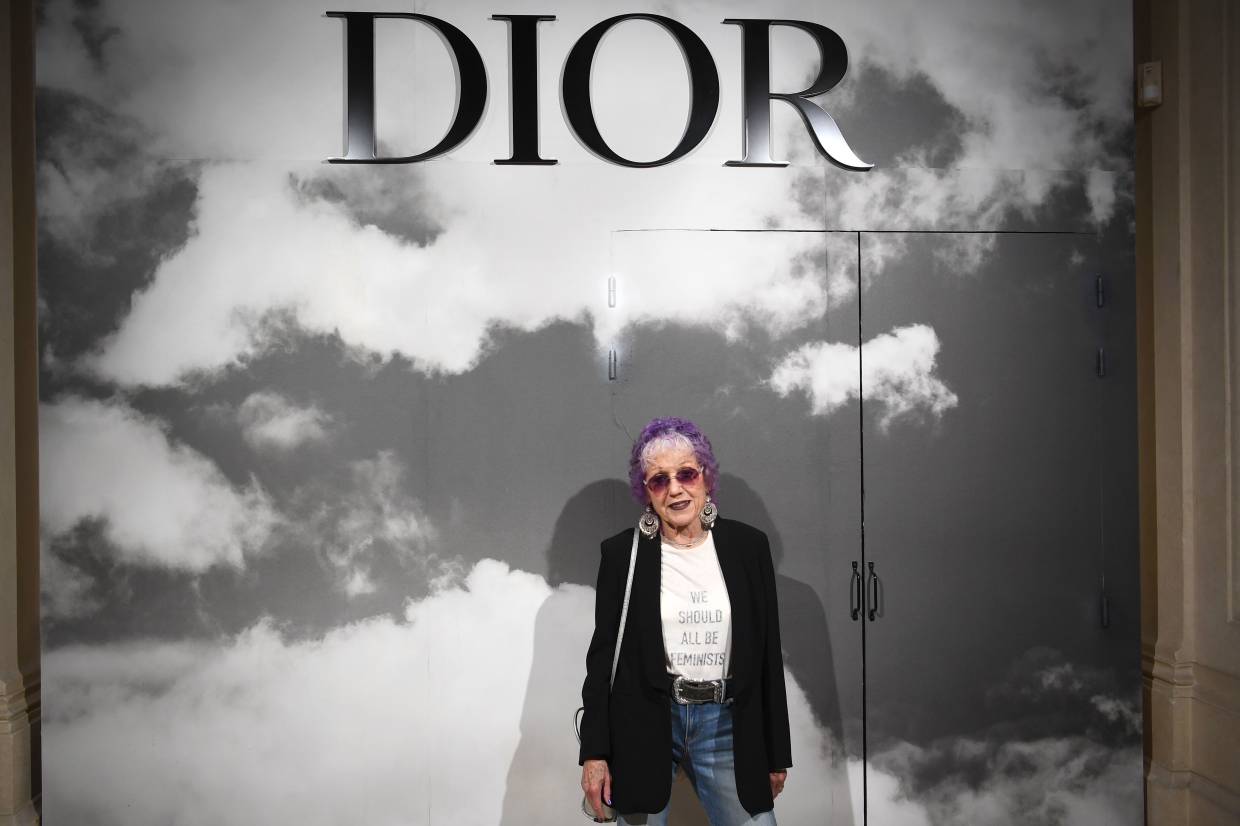 'Everybody wants to go back to the womb. Given what is happening in the world, it is a totally understandable impulse, don't you think?' says Judy Chicago about the space she had created inside the goddess. Photo: AFP

Chicago has been dreaming since of creating a temple inside a giant reclining figure that resembles Cybele, the ancient Anatolian mother goddess.

In its warm, curiously comforting interior Chicago has hung 10 banners which question what the world might look like if it was run by women.

"I know it is a miracle that I am standing here given all the opposition I have faced in my life," said Chicago.

"But here I am in the body of the goddess and people seem to love being in this space."

The artist could not believe her luck when Maria Grazia Chiuri, Dior's first ever female designer stumped up the cash for her to finally make her most famously unrealised work.

Even if the four-month deadline she was set might give artists half her age heart failure. Judy Chicago, a feminist pioneer artist, has planted a massive temple to the mother goddess on the lawn of one of art's greatest machos, the sculptor Gustave Rodin. Photo: AFP

"It's so appropriate that it is Dior," said Chicago.

The brand's founder Christian Dior opened an art gallery before he began designing and "was way ahead of his time", she added.

"Dior is (way ahead) again now because they have anticipated that women don't want to be oppressed by clothes anymore... they want to be empowered by them."

Chiuri created a fashion earthquake in 2016 when she began her first Dior show with a T-shirt declaring that "We should all be feminists", and has used every one since to champion women and sisterhood.

Chicago said her temple – which will open to the public on Tuesday for five days – was "the creative opportunity of a lifetime".

"I discovered goddess imagery while I was doing The Dinner Party. All early societies worshipped female deities. That was very empowering for me to realise that God could have a female face," she said.

"Unless we can see ourselves in the divine we cannot experience ourselves as fully human.

"Imagine if you were told you were born out of a rib?" the artist added, leaning back to unleash another roar of laughter as she referred to the biblical story of how women were created from Adam's rib.

Chicago is also tickled by the kismet of how her monumental ode to womanliness has ended up in Rodin's backyard.

The giant of French art's legacy has long felt the sting of feminist critics for his treatment of Camille Claudel, his onetime lover and model, who many argue was his equal artistically.

You pass one of Rodin's most famous sculptures, The Kiss as you walk down the steps to enter Chicago's installation.

"In the Rodin Museum you have a male gaze and a masculinist position," Chicago argued.

But "behind it is a female gaze and a feminist position, and they both take up the same amount of space. It's a good example of equality.

"Wouldn't it be wonderful if that's what the whole world was like ..." – AFP