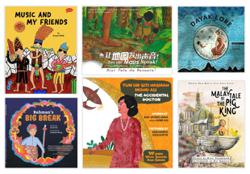 When Juvita Tatan Wan was a young girl, she spent a lot of time away from her Kenyah community in Sarawak. Due to her father's job in the oil and gas industry, she lived in various cities and towns all across Malaysia.

Her father John Wan Usang, however, always made it a point to travel back to their longhouse in Long San, Baram, near Miri in Sarawak, to make sure their family was connected to their roots.

“Every trip back, even since I was a kid, was always a new discovery of my own culture, who I am. From the welcoming poetic songs sung by my aunties, or when I was made to ‘saga’ which is perform the traditional dance in front of the whole longhouse, to having an entire community refer to me only as ‘Tatan’, my Kenyah name,” says Juvita.

Through her work with the Tuyang Initiative, a social enterprise and arts management outfit that she co-founded with her father in 2016, she has now found a theatre platform to introduce Dayak cultural heritage to the masses, focusing on the Kenyah and Kayan communities.

“I wanted to find a way to transport people’s imagination into our longhouse and experience it as if they were there with a nine-year-old me, discovering our community. For the audience to be introduced to the Kayan and Kenyah people and our rich cultural heritage - our history, language, our traditions, to little nuances of our longhouse life,” she adds.

That is the inspiration behind Spectrum ’19: Kelunan, a show at DPAC in Petaling Jaya, which opens on Sept 6. It is conceptualised by Juvita and the community-based Tuyang Initiative. Tuyang means “friend” and the word kelunan means “people” in the Kenyah and Kayan language.

Kelunan is an ambitious joint showcase of Kayan and Kenyah cultural heritage, exploring the universal theme of love through a multidisciplinary performance deeply rooted in tradition.

The show features Mathew Ngau Jau, 67, a Kenyah sape master (awarded the title of Malaysia’s Living National Heritage) as well as Adrian Jo Milang, 21, a Kayan storyteller/performer, who is the youngest practitioner of the oral traditions Parap (impromptu songs) and Takna (epics about warrior heroes).

A cross-generational cast of Kayan and Kenyah cultural practitioners, including Rose Belare, Salomon Gau, Lian Balan, Edmund Ngau Bilong, Marlyn Lengan, Eleanor Simon and Grace Saban Henry, will also be at the heart of the show. They age between 21 and 73.

Together, they will all be performing as the collective Lan e Tuyang (which loosely means “among friends”), a group started by Mathew and the late Uchau Bilong, a master Kayan sape player, who died in 2009.

The showcase, according to Juvita, is an accessible way for newcomers to experience the nuances of Kayan and Kenyah languages through their oral traditions of poetic singing and storytelling. The set, with narration, will also feature ancient war songs from the rich histories of both communities, as well as dances and payu (traditional wrestling).

“The show will be accompanied by folk-based songs and musical instruments such as the jatung utang (wooden xylophone) and the celebrated sape (a lute from Borneo). Throughout, we will be assisting the audience’s theatre journey with English translations,” says Juvita.

Putting the show together, she reveals, has been a wonderful challenge, which has brought with it a sense of pride. Some of the musical practitioners are also based in the interiors of Sarawak, so coordinating everyone’s plans has not been an easy task.

“From a community perspective, we ourselves feel this to be something unique. The fact that this is the first time Kenyah and Kayan community practitioners have come together to develop a cohesive storytelling stage performance that stays true to us, makes this special.

"This could be a landmark performance that highlights the potential of showcasing Dayak cultures, beyond the ‘exoticised’ and superficial tourism way, and that we could possibly develop more into the performing arts space,” says Juvita.

Her aim for Kelunan is to give the mainstream masses a glimpse of Malaysia not often seen on stage.

“Be curious about the many indigenous peoples and cultural traditions not just in Sarawak, but across the whole country as well.

“Maybe the masses might even be able to differentiate us one day!” says Juvita.