Illuminated under a spotlight at London’s British Museum, hand-drawn sketches of Hong Kong’s 2014 Umbrella Movement are part of a new exhibition on dissent that offers a rare glimpse of the artworks produced during the pro-democracy rallies.

The months-long demonstrations, which kicked off on Sept 28 four years ago, brought parts of the city to a standstill as protest camps took over areas normally clogged with traffic and commercial bustle.

Images of some of the thousands of posters, banners, drawings, sculptures, shrines and caricatures that adorned walls, bridges and roads in the tent-filled camps have been gathered online and in library archives.

But the original works have largely fallen out of view.

With Beijing tightening its grip on the semi-autonomous city and fears that freedom of speech is being curtailed through moves such as a ban on a pro-independence party and the prosecution of Umbrella Movement leaders, some feel it is safer to send the art abroad.

Fong So was one of dozens of local artists who sketched the protests and his works are on display as part of the British Museum’s I Object exhibition.

He has given his entire collection of more than 100 Umbrella Movement sketches to the museum. A yellow umbrella, symbolic of the protest, printed with the lyrics of John Lennon’s Imagine, is also on display at the current show from an anonymous donor.

The movement earned its name after protesters used umbrellas to defend against police tear gas on Sept 28.

“I consider the collection of sketches a documentation of a piece of contemporary history. So, it’s good to see it enter a museum,” said Fong.

He describes the political situation in Hong Kong as “more and more suffocating” and says he plans to send away other politically sensitive works.

Alvin Wong, founder of Hong Kong’s Urban Sketchers group, brought together hundreds of sketches by 31 artists in a book entitled Sketches Under The Umbrella, published in 2015.

“All these sketches belong to the people of Hong Kong. We shouldn’t keep them in our own sketchbooks. We have to tell everybody what we saw,” said Wong.

He has sent copies to libraries around the world, mainly in the United States, and says only a few bookstores in Hong Kong would stock it.

This combination of images show items created and given out during Hong Kong's 2014 Umbrella Movement, including stickers which translate as 'I Want Universal Suffrage' (top left), a yellow ribbon, a symbol of the Umbrella Movement (top right), yellow wires shaped into umbrellas (bottom left) and a badge which reads 'Keep Calm and Umbrella Movement' in Hong Kong.

Politically sensitive titles have been steadily removed from many city bookshops, particularly since the disappearance in 2015 of five booksellers – known for publishing gossipy accounts of China’s political leaders – who resurfaced in custody on the mainland.

Although Umbrella art and memorabilia were part of local exhibitions soon after the movement, the largest trove is now in storage at the Chinese University of Hong Kong’s (CUHK) library, where the public can only view it as a digital catalogue.

The majority of works were donated by artists and activists who rescued them from the protest camps to create the Umbrella Movement Visual Archive.

The library collection ranges from scrawled slogans on placards to bags, jewellery, kites and sculptures, reflecting the fact that the public, not just accomplished artists, created the ad hoc landscape that became a hallmark of the movement.

Kacey Wong, who put together an online photo collection ‘Umbrella Movement Art Preservation’ Facebook page, poses with his ‘Blind Sketches’ which he drew during in 2014.

But the whereabouts of some major pieces, including the famous 3.6m high wooden “Umbrella Man” statue, remain a mystery.

Artist Sampson Wong, co-founder of the visual archive group, said they handed over the collection because they lacked the funds and manpower to preserve it.

The library is a “reliable institution”, said Wong.

“It preserves a part of the movement that in some years could be overlooked,” he added.

With the democracy camp still on the back foot after the protests failed to win political reform, there is little appetite among activists to mount a public exhibition of the works.

And with concerns over the erosion of freedoms, some who created or collected pieces may prefer to keep them to themselves, says Clarisse Yeung, co-founder of the visual archive, and now a district councillor.

The statue ‘Umbrella Man’ by the Hong Kong artist known as Milk seen in 2014. The whereabouts of some major pieces, including the famous 3.6m high wooden Umbrella Man statue, remain a mystery.

But some feel the physical works should go on show once more.

“It’s like the whole world is interested except the institutions of Hong Kong,” said Ho, who has delivered lectures globally about Umbrella art.

M+ said it was still “carefully evaluating this recent past” and would not currently consider Umbrella Movement works for its collection.

Hong Kong-born academic Dan Tsang, a former visiting Fulbright scholar at CUHK researching how to archive protest culture, says he is concerned that works not yet gathered from the public may be thrown away or sent out of the city.

“I think people like to touch and see the real thing, the actual artwork – it’s different from just looking at a digital image on a computer screen or phone,” he said. – AFP 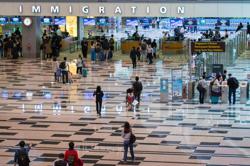 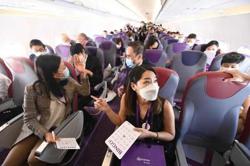 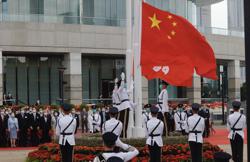