'The Inverted Banyan Tree': A tale of love and faith in 1950s Port Dickson

It all started back in the 1980s. Scriptwriter J.K. Asher was on a trip to Port Dickson, Negri Sembilan, to make a movie with noted local filmmaker Shuhaimi Baba. While on location, she discovered a truly rare sight: what appeared to be a beautiful Tudor mansion in the middle of the town.

“I thought, oh my gosh, there’s a piece of England here, before my very eyes! And it’s beautiful. What is it doing here?” Asher recalls during an interview in Kuala Lumpur recently.

“I fell in love with Port Dickson. And I think something took root then. Something happened to me, I began to look at this whole world of words and places.”

The mansion, sadly, has since been demolished. But the memories of it persisted. So strongly, in fact, that they inspired the setting of The Inverted Banyan Tree, Asher’s debut novel, which she described as a “community love story”.

Published in Australia by Atlantis Books, Asher’s novel is woven from two parallel timelines: British Malaya in the 1950s, and independent Malaysia in the 1980s. Amazingly, the 388-page novel was originally written by the author without the aid of a computer.

“When I see the words on a computer, they make me nauseous. So I wrote it all longhand!” Asher says with a smile.

The Inverted Banyan Tree tells of Mariam, a young Roman Catholic Serani – of mixed Asian and Western parentage – girl, who bravely saves the life of a Muslim teenager, Ishmael, from Japanese soldiers during World War II. His father Ummah, the headman of a village in Port Dickson, is captivated by Mariam’s bravery.

Years later, Ummah hopes for Ishmael and Mariam to get married. But things have changed in Malaya over the decades, and even the sanctuary of Port Dickson comes under threat as the nation is caught up in new money and greed. Tensions grow as religion becomes hijacked by fanaticism, and Ummah, Ishmael and Mariam must fight to stay together as faith becomes tempered with violence.

Born in Seremban but growing up in Petaling Jaya, Selangor, Asher had wanted to be a writer since childhood. Her love of reading, she says, was sparked by her elder brother, K. Arjan Singh, who would buy all kinds of books.

“When I was young, I always thought I’d like to write a book one day. I would think, these worlds are magical, what were all these things I was reading? And I wanted to create something like that,” says the author who has a son in secondary school.

The author spent 17 years living in Sydney, Australia, after marrying an Australian. Part of the novel, she says, stemmed from her experiences having to adapt to a foreign culture.

“When I was living in Australia, I was what you would call a pendatang (new arrival) there. I had to go through my own journey there. And I began to feel something of a ‘loneness’, a sense that I had left something behind,” Asher says.

“I truly love this country. Australia is a great country, you’ll never have anywhere else like it in the world. But what we have here in Malaysia is very hard to find. That’s why to this point I haven’t taken Australian citizenship.”

At the same time, Asher was also fascinated by the Kristang, an ethnic group of people of mixed Portuguese and Melakan descent living in Malaysia. While the group can trace its beginnings to the early years of the Melaka Sultanate in the 16th century, its numbers have dwindled over the years.

“That was a parallel journey for me. And I came up with this story, of a beautiful Eurasian girl, and the son of a village headman,” the author says.

According to Asher, writing the novel took almost the entire 17 years she lived in Sydney, partially because of the large volume of research she had to do for it.

Much of her novel, she says, is a call back to a simpler, more peaceful time, when the country was not so fraught with division.

“In the 1940s and 1950s, there was an embracing in our Malaysian society. We didn’t regard each other with suspicion, as we do today. My book stops in 1985, at a time I feel we were on the verge of losing our innocence, as a lot of stuff happened after that, a lot of political and social things.

“I leave the book with a question: is what we used to have in Malaysia now under serious threat?”

Much of the novel, she says, pays homage to Malay culture and to the religion of Islam, which Asher feels has been hijacked, particularly after the events of Sept 11, 2001, when New York City and Washington DC were attacked by Osama bin Laden’s terrorists.

The title of the novel, Asher says, came from several sources, one of them being the nature of the banyan tree, which has branches that often grow downwards towards the ground and look like many trunks.

“My banyan tree is inverted because it’s one tree, but many trunks. In the end, while we seem different, we are all part of the same tree,” the author explains.

The book has already been optioned by Pesona Pictures; while it is still too early for Asher to provide details at our interview earlier this month, we gather that we might be seeing a film or TV series based on the book in the future.

Asher is already researching her next novel; she hopes to write a novel about three generations of Indian women who came to this country.

“I would love to tell my mother’s story. She was a phenomenally brave and courageous woman. She was not educated, and was widowed at the age of 40, but managed to raise smart children. She loved us very much,” Asher says with a reminiscent smile.

'The Inverted Banyan Tree': A tale of love and faith in 1950s Port Dickson 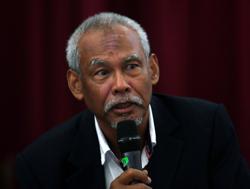 Kanger in MoU with Zuellig