Photographer brings his city out of the shadows Daido has spent his life obsessively photographing the dirty stairwells, neon signs and salarymen from Tokyo in gritty black and white.

Something new, something old, something edgy. The newly opened A+ Works of Art gallery in KL has started with a bang, launching a solo by legendary Japanese photographer Daido Moriyama.

“Daido is one of the biggest names in Asian photography and having his works shown in KL is a boost to promoting photography here,” says Joshua Lim, A+ Works of Art gallery’s director.

Lim admits the Mapping City exhibit may not be a definitive retrospective, but through the 39 works on display, the show does offer visitors a strong impression of Daido’s creative essence. The photographs span six decades of Daido’s career.

A+ Works of Art gallery is also the official representative of Daido’s works in South-East Asia.

Gwen Lee, the co-founder and director of Singapore International Photography Festival (SIPF) and Singapore’s Deck gallery (an independent art space), was tapped to curate the Mapping City exhibition. Lee’s work on the Daido Moriyama: Prints & Books From 1960s–1980s exhibit during SIPF 2016 last October was one of the reasons Lim knew he had the right person to debut the Japanese photographer’s solo in Malaysia.

For Lee, organising an exhibit is a collaborative effort between artist and curator. The show gathers works from the 78-year-old photographer’s Hunter, Monochrome, Light And Shadow and Dog And Mesh Tights series.

“I make a point to meet the artist I’m curating. Anyone can look at a work and find their own view, but I want something deeper,” says Lee.

“Daido was aware of how the KL exhibit would be presented,” says Lim.

One of Daido’s best-known images is of a stray dog he encountered on a street in Aomori in northern Japan. It was taken in 1971.

In a video, Daido explains his philosophy with street photography and how they represent a city, not in terms of the streets or people, but to directly capture its pulse.

“My decisiveness as a photographer is not to document, as a photo cannot tell a whole story,” says Daido, revealing his style.

Daido moved from Osaka to Tokyo in the early 1960s to become a photographer. Inspired by the work of an earlier generation of Japanese photographers, especially by Shomei Tomatsu, and by William Klein’s seminal photographic book on New York, he became the leading exponent of a new photographic style that corresponded perfectly to the abrasive and intense climate of Tokyo during a period of great social upheaval.

Mapping City, despite its modest scale, is a sampling of the man’s raw street photos.

However, beyond the Daido video, scarce information is offered on the gallery’s stark white walls. The lack of instruction, according to Lee, is to ensure Daido’s photographs take centre stage.

“Eyes are inevitably drawn to text to explain, as most people aren’t trained to read a photograph. The only giveaway is the title of the exhibit, Mapping City, but what does it mean, which city are we referring to ... Kuala Lumpur, Tokyo or somewhere else?” she quips.

Despite a sizeable gallery space, Lee maintains that the Daido works needn’t be an overwhelming presence.

“I don’t just want visual impact. Instead I want the audience to understand his language,” says Lee, walking outside the gallery to point out how a floor to ceiling mural of Daido’s works can easily become a signboard robbed of its original context.

Daido has spent his life obsessively photographing the dirty stairwells, neon signs and salarymen from Tokyo in gritty black and white.

She notes that the older prints – mostly from Daido’s late 1960s Hunter series – are also limited to how much they can blow up old negatives without too much deterioration or resorting to digital processes.

In the past, a few of Daido’s works have shown in KL before – as part of Japanese Foundation Kuala Lumpur’s Gazing At The Contemporary World group exhibition in 2013 – but this solo exhibition is a necessary introduction for newcomers.

A+ Works of Art gallery is also planning a tighter, more focused Daido show next September.

Lee believes that exposure to such works will inspire a new generation of Malaysian photographers to push the boundaries and develop their own visual language.

“Nothing grows out of nothing. We always have to look back to move forward,” concludes Lee.

Photographer brings his city out of the shadows 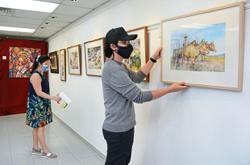