The newly-opened Malaysia Cartoon And Comic House, nestled in leafy Taman Botani Perdana in Kuala Lumpur, is set to be a major attraction for comic book enthusiasts and the more curious-minded. The building, which is now home to the nation’s cartoon and comic book story, is practically packed out, wall-to-wall, with original comic book art, editorial cartoon strips, storyboard sketches, studio notes and vintage youth culture magazines, all dedicated to chronicling Malaysian comic book history and culture.

“There is no shortage of material to exhibit when it comes to local cartoons and comics. It was a question of how we wanted to present the Malaysian narrative for this form of art, which admittedly, wasn’t taken so seriously or even overlooked in the past,” says Tazidi Yusof, 58, Malaysia Cartoon And Comic House curator/researcher, when unveiling the initiative recently.

The cover of the first issue of Gila-Gila magazine, which hit the newsstands in April 1978.

“Right now, there is a far better appreciation for the many homegrown names who built up our cartoonist and comics community. Influential names, like that of the late Rejabhad, Datuk Lat, Gila-Gila magazine founder Jaafar Taib and Ujang (Ibrahim Anon), will be the obvious ones that people will recognise instantly. But the mission at Malaysia Cartoon And Comic House is also to introduce and celebrate the entire community – the early pioneers, the legends, the outsider artists, right down to the clearly weird mavericks and one-hit wonders,” he adds.

The idea behind Malaysia Cartoon And Comic House, says gallery manager Azhar Adnan, 45, is to create a public centre that would appeal to lifelong comic collectors, pop culture geeks, students, and also, cater to the tourist traffic in the area.

“We wanted a fun, cool and relaxed atmosphere in the gallery, and I think we have come real close to it. In being entertaining and informative, we had to find the right balance – given the limited space we have now,” says Azhar.

“In the gallery, you might feel that you are negotiating an A5-size comic book, but rest assured, the tight corners are filled with great treasures and some priceless nostalgia,” he adds.

Over 500 cartoon and comic book works – spanning mid-1930s to the late 1990s – are on display now at the gallery, with Tazidi revealing that less than 10% of the Malaysia Cartoon And Comic House archive has been made public in this opening exhibition.

The main men – (from left) Mohd Desa Omar (founder), Tazidi Yusof (curator) and Azhar Adnan (gallery manager) – who made the Malaysia Cartoon And Comic House in KL a reality.

Tazidi, who is a veteran cartoonist and illustrator, kept this project close to his heart.

“It’s a labour of love, with so many old friends and new ones coming forward to support us,” he says.

The majority of the original works have been loaned from private collectors as well as Creative Enterprise Sdn Bhd (Gila-Gila publishers) and Balai Kartun Rossem, a private museum in Kota Baru in Kelantan.

Datuk Lat has several works on show at the Malaysia Cartoon And Comic House, including his classic Mat Som comic book, published in 1989.

Tazidi reveals that Malaysia Cartoon And Comic House was originally planned in 2015 (in tandem with the comic awards Anugerah Kampung Boy). Archival work began back then with a cadre of cartoonists, comic artists and collectors banding together to source original comic strips, editorial and gag cartoons, comic book, graphic novels, animation and caricatures.

“Research work and the conservation of comics were done at our studio (in Petaling Jaya). The cleaning up process for the original strips was fairly straightforward. We had to deal with yellowed pages, torn strips, tattered 40 year-old copies of Rina magazine ....

“However, documentation work, which later became full-blown investigative adventures, was always going to be tricky since there were so many cartoons and comics without dates or (artist) signatures ... we really had to jog some memories,” says Tazidi with a chuckle, recalling consulting older artists.

The late Rejabhad (1939-2002), one of the influential names in the Malaysian comics scene, was known for his wide range of works. The former army man even documented his time in uniform with his Prebet Dabus series from the 1970s.

A Jaafar Taib-drawn cover of the Murni variety magazine from the early 1970s. - SADIQ SANI/The Star

The 1970s Lt. Azman series, which focused on military stories.

Maya’s Musang Puaka comic strip in Rina magazine in the 1973.

Malaysia Cartoon And Comic House founder, Mohd Desa Omar (aka cartoonist Juragan), says the gallery is set up in a loosely chronological manner, focusing on reprints of Malay editorial cartoons from the 1930s and 1940s.

“We put these early works at the front of the gallery to emphasise their importance, and show people that local cartoons are not so much a distant culture as you might think” says Mohd, 52.

The cartoons, loaded with political satire and social criticism, were popular in Malay newspapers like Warta Jenaka, and Utusan Zaman. Another source of cartoons was the Majlis newspaper in the 1940s, while Berita Harian’s arrival in 1957 signalled an increased usage of cartoons in its pages.

“A pool of regular cartoonists and contributions from the public made up the bulk of editorial cartoons in the early days,” says Tazidi.

The exhibition takes in the 1950s and 60s with independent comics from Saidin Yahya, Halim Teh, Raja Hamzah, Sulaiman Awang and Osman Baru.

The women are impossibly sexy in veteran artist Azman Yusuf's artwork for fantasy and adventure comic books like Puteri Ular, Puteri Rajawali and Penghuni Lembah Kaca. He began his career in the 1970s.

The Gila-Gila corner, complete with its popular fist wave alumni, is bound to attract major attention, while the independent-era (from the late 1960s/70s) is packed with serious raw variety comics, romping through fantasy, folk tales, humour, sci-fi, romance, adventure, monsters and superheroes.

“We had our fair share of underground comics, DIY comic publishers ... loads of sneering, cackling villains, and sexy characters. The verbal and visual poetry of that era can still blow your mind. We are talking about a bunch creators, barely in their teens, dreaming of coming up with something new and exciting ... I’m glad we have some of their works on our walls,” concludes Tazidi. 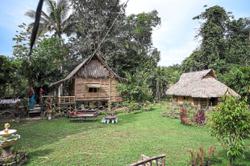 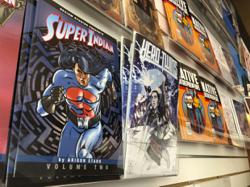