Stepping back in time

Christmas Island recently celebrated its 50th year of being a territory of Australia, and a large group of Malaysians was there to join in the fun.

THE vast blue Indian Ocean envelopes this tiny island, teeming with exotic crustaceans, birds and marine life. With an area of 135sqkm (compared to Singapore’s 683sqkm), it is literally a dot in the ocean. The nearest land due west is Africa, which is over 5,000km away.

Situated just south of the island of Java, Christmas Island - named in 1643 for the day of its discovery - remains very much a well-kept secret, safe from the ravages of tourists and technology. Nature’s wonder: The Blowholes of ChristmasIsland are breathtaking, and not to be missed. –Pics by CHUA KOK HWA / The Star

When you first land on its shores, you’re bound to feel just a little separation anxiety ... from civilisation. There are no malls on the island. No cineplexes or designer coffee shops. No luxury hotels or highways. Heck, there aren’t even any ATM machines.

The airport is in service when there’s a flight scheduled - which is only twice a week. The National Jet Services flies in on Mondays and Fridays from Perth. And the Australia Indian Ocean Territories Airline (AIOTA) flies in from Kuala Lumpur (serviced by Malaysia Airlines) on Mondays.

Once you arrive, it’s almost as if you have stepped back in time - the roads, houses, furniture, tableware and even linen all seem to have been unearthed from a different era.

On a quick tour of the island, the guide is more likely to point out places of interest to her (that’s my house, that’s where my mum and dad got married, that’s where I had breakfast last week).

The “real” highlights, after all, are few and far between (well, not that far as the island is only 19km long and 14km wide): a nine-hole golf course, Flying Fish Cove, Tian Jin community house, the Grotto, the Dales, Blowholes, a couple of beaches - and that’s it.

Still, there’s something pleasantly quaint about everything here. And chances are, after you’ve left your anxiety at the airport, you’re bound to grow at least a little accustomed to the laidback life and the rustic, rugged charm Christmas Island has to offer. 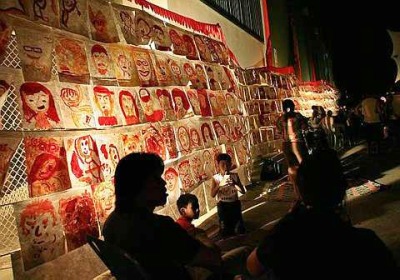 Settlement began on Christmas Island in the late 1880s by the British, after naturalist Dr John Murray’s surveys revealed a potential for phosphate mining. It wasn’t until 1957 that Australia purchased the island.

Sovereignty was transferred to Australia in 1958 and Territory Day is celebrated on Oct 1 every year with much enthusiasm by the locals. Think street parties with feasts of food, dragon dance, stilt walkers, community parade and live music well into the night.

This 50th anniversary celebrations - or the Big Five-O, as it was fondly referred to on the island - somehow caught the eye of a large group of Malaysians (more than a hundred) comprising a troupe of dancers, a group of marathon runners, as well as friends and family, who cleverly combined the idea of holiday, anniversary celebrations, dance workshop and half marathon all in one.

The group had worked out an affordable holiday package with Travel Exchange Christmas Island, a local travel agent who took care of the nitty-gritty of transport, food and lodging.

However, the island clearly wasn’t prepared for the flight-load of tourists that descended upon it in early October.

On the morning of Oct 3, a Friday, everyone flew in on a chartered flight; a quick tour of the island followed. On Saturday, the runners (together with many locals) set off on a 21km run through the woods of Christmas Island. Meanwhile, the dancers spent the entire day in a line dancing workshop. Street parties on Saturday and Sunday night found everyone joining in the feast, fun and revelry. Come Monday, everyone was on board the flight back to Kuala Lumpur.

Along the way, there were some touching stories. There was a “family reunion” of sorts - Selina Lew from Petaling Jaya (who had come for the dance workshop) reunited with her uncle and his family after 35 years. And new friendships were formed too - Khalijah Bakar of KL, and Jenap M. Said of Singapore, quickly found local Malay families on the island to celebrate Hari Raya with. These families were so hospitable, ferrying them to all the tourist spots and feeding them throughout their stay! Burst of colours: Stilt walkers and floats of giant sea animals parading through the streets at theBig Five O.

There were dignitaries on hand, too. Senator Trish Crossin and Senator Kate Lundy from the Australian Senate had come for the celebrations. As did the Consul General of Malaysia, Hamidah Ashari. The first Malaysian Consul General to visit Christmas Island, Hamidah decided to host a Hari Raya Open House gathering for some of the locals and Malaysians living on the island, on the same weekend.

The logistics of handling such a big group of visitors to the little island was overwhelming, and often transport became tedious. Many places were only accessible by 4WDs which could seat up to five or six passengers at a time. A lot of time was spent waiting for transport to arrive, and patience didn’t seem to be a virtue the visitors possessed.

There were hiccups at meal times, too. Many of the eateries on the island were not equipped to handle large groups of customers, and all of them were shut for Sunday night’s Big Five 0 celebration as everyone had gone for the party!

It was a learning experience, and the visitors came away with a better understanding of the island and the constraints with which its inhabitants have to live on a daily basis.

Christmas Island’s population, which stands at 800 (quickly depleting as younger generations leave for better prospects), is made up of 70% Chinese, 20% Europeans and 10% Malays. Thanks to the mining industry, there is a healthy mix of cultural influences from both Europe and Asia here. Many locals are descendants of immigrants from China, Malaysia, Singapore and Indonesia, and the Chinese and Malay communities have a distinct cultural identity.

Names of the roads and shops quickly give you an indication of this strong presence - Meng Chong Trading, Season Palace Restaurant, Kampong Poon Saan and Jalan Ketam Merah make you feel more like you’re in Singapore than in an Aussie shire. 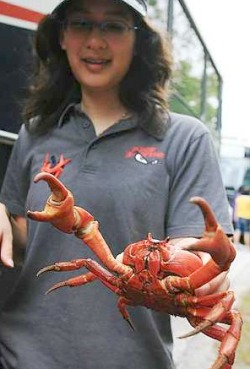 Many of the Chinese locals still have strong ties with their families in Malaysia, and it’s hard to tell an islander from a Malaysian.

Retired mining worker Tan Kim Chuan, 72, has family in Bukit Mertajam, Penang, whom he keeps in touch with.

“I came to this island 35 years ago,” he reminisces. “Guthrie Boustead was then the recruiting agent for the BPC (British Phosphate Commission). I came as a labourer, as did many other young men from Singapore and Malaysia at the time,” he explains in a mix of Hokkien and English. The Hokkien was translated for me by the manager of community services on Christmas Island, Chew Boon Beng, 56, who also came here as a labourer in 1975.

Back then, Tan was paid a salary of A$3.70 a day. (Today, he estimates the wages to be A$15 an hour.) “In the old days, there was no such thing as wage parallelity. Asian labourers were paid much less,” explains Tan, who continues to live at Drumsite (a little village of houses) with his wife. His adult daughter has left the island, to live in Melbourne. Crab crossing: It’s only on ChristmasIsland that you’ll see such a signboard

Both Tan and Chew enjoy the relaxing life they lead on the island. Although there aren’t many recreational activities for the men to indulge in, they enjoy playing the occasional game of mahjong, drinking together and going fishing.

Sadly, Tan feels that once the phosphate is depleted, the island won’t have much of a future.

The main vocation on the island is, after all, mining. Phosphate mining has been the only significant economic activity (although the mines were closed from 1987 to 1991 by the government). With the support of the Australian Government, a A$34mil casino opened in 1993, but was closed in 1998. Other than miners, you’ll probably find local sundry shop/restaurant/tour operators, teachers, and hospital and national park workers. There’s not much else to do.

There’s only one petrol station, one post office, and one courthouse.

Media? There’s a handful of Australian channels on TV, a community radio station and a fortnightly newsletter called The Islander. Another source of information is the notice boards at the Settlement roundabout - a series of black boards that residents use to highlight local events, including birthdays, parties and what’s playing at the outdoor cinema which operates on Saturday nights.

The best parts of the island are, naturally, its lush rainforest, amazing birdlife, idyllic beaches, jaw-dropping landscapes, and sea and land creatures. The red crab alone is a veritable icon of the island and draws in visitors from far and wide for its annual march during migration season. In November and December, these 10-legged creatures crawl their way out of the forests to the coast to breed.

More than 60% of the island is now under the protection of the Australian Parks authority which has raised awareness and launched conservation measures to protect the island’s unique natural heritage.

According to the Australia Government’s parks and reserves website (environment.gov.au/parks), the park contains the last remaining nesting habitat of the endangered Abbott’s booby, and the only nesting sites of the Christmas Island frigatebird; supports the world’s largest remaining robber crab population; and probably contains the largest and most diverse land crab community in the world.

This alone should provide nature lovers with something to look forward to. You can also listen to the roar of the seawater at the Blowholes rock formations, enjoy the relaxing stream at Hugh’s Waterfall or simply watch the sunset from Martin Point. And if you go at just the right time, there’s a chance you could dive with a whaleshark or two.

Far from what its earliest settlers thought, Christmas Island does have so much more to offer than just phosphate.