THE first time I had vegetarian escargot, I could not believe how much the taste, texture and appearance resembled the cooked snails.

It was more than 20 years ago, and it was from a vegetarian restaurant that did not use faux meats and meat substitutes to create its dishes.

Instead, the cooks used real vegetables and quite a bit of creativity to make their menu more diverse.

One of their other creations was a vegetarian squid tentacle dish made with enoki mushrooms, but that is another story.

I tried to recreate the vegetarian escargot after trying it at the restaurant.

It was somewhat successful but did not have the correct texture because I had dredged mushrooms in flour instead of cornstarch.

When I retested with cornstarch, it proved a success. Vegetarian escargot is basically shiitake mushrooms deep-fried to mimic the taste, texture and appearance of escargot minus the shell.— AZMAN GHANI/The Star

The fried mushrooms retained their crispy exterior, while the long poaching created a tender interior with just a bit of resistance to the bite.

I received a comment in one of my previous videos that I should not soak shiitake mushrooms for too long because they would lose their flavour.

I have not actually encountered that problem when I buy good quality mushrooms, although I have chosen really small ones for this recipe.

Albeit smaller than the ones I usually buy, these plumped up thick after soaking.

Braise the mushrooms until tender then discard the stems and marinate the caps with seasoning.

Marinating the shiitake makes a huge difference in bringing out the mushrooms’ flavour.

When all the seasoning has absorbed into the mushrooms and they are no longer wet, dredge the caps in cornstarch and deep-fry them immediately.

The dressing is quite basic for many Chinese dishes except I opted for vegetarian oyster sauce.

The regular oyster sauce may be used too in the absence of the vegetarian flavour.

You may deglaze the pan with Shaoxing wine if you don’t have to be strictly vegetarian.

When the mushroom infusion is in the pan, you can add hair moss (fatt choy) at this juncture if you wish to make the dish even more festive for Chinese New Year.

After the dressing is poured over the fried mushrooms, serve immediately to retain their crispiness.

Leftovers, although limp, will still taste amazing because the mushrooms’ flavour evens out and seeps into the other vegetables served alongside.

Soak mushrooms in two cups of water overnight until plumped up. Stew mushrooms over low heat for two hours until liquid reduces by half.

Alternatively, braise in a pressure cooker for 40 minutes.

Reserve the mushroom infusion for the dressing.

When cooled, squeeze out the liquid, discard the stems, and marinate the mushrooms with seasoning ingredients for 30 minutes.

In the meantime, bring a large pot of water to a boil with salt, sugar and cooking oil.

Drop in broccoli florets in batches and poach for about three to five minutes until vegetables are soft, then immediately plunge into cold water to stop the cooking process to retain the vegetable’s bright green hue. Repeat with remaining florets. Arrange poached broccoli, in a ring, around the rim of a large platter.

Cook carrots the same way, except you do not have to plunge into cold water because they will not lose their colour. Create an inner ring of carrot against the broccoli.

Dredge the marinated mushrooms in cornstarch until well-coated.

Heat the cooking oil in a fryer and deep-fry the mushrooms in batches until slightly golden.

Arrange fried mushrooms in a heap in the centre of the platter surrounded by the rings of vegetables.

For the dressing, heat two tablespoons of cooking oil (you may use the frying oil) and toss in ginger, shallots and garlic to saute until wilted but not brown.

Deglaze with mushroom infusion and bring to a boil. Add hair moss if desired.

Add vegetarian oyster sauce and soy sauce to taste, then thicken with cornstarch slurry and bring to a boil.

Pour dressing over mushrooms and vegetables and serve immediately. 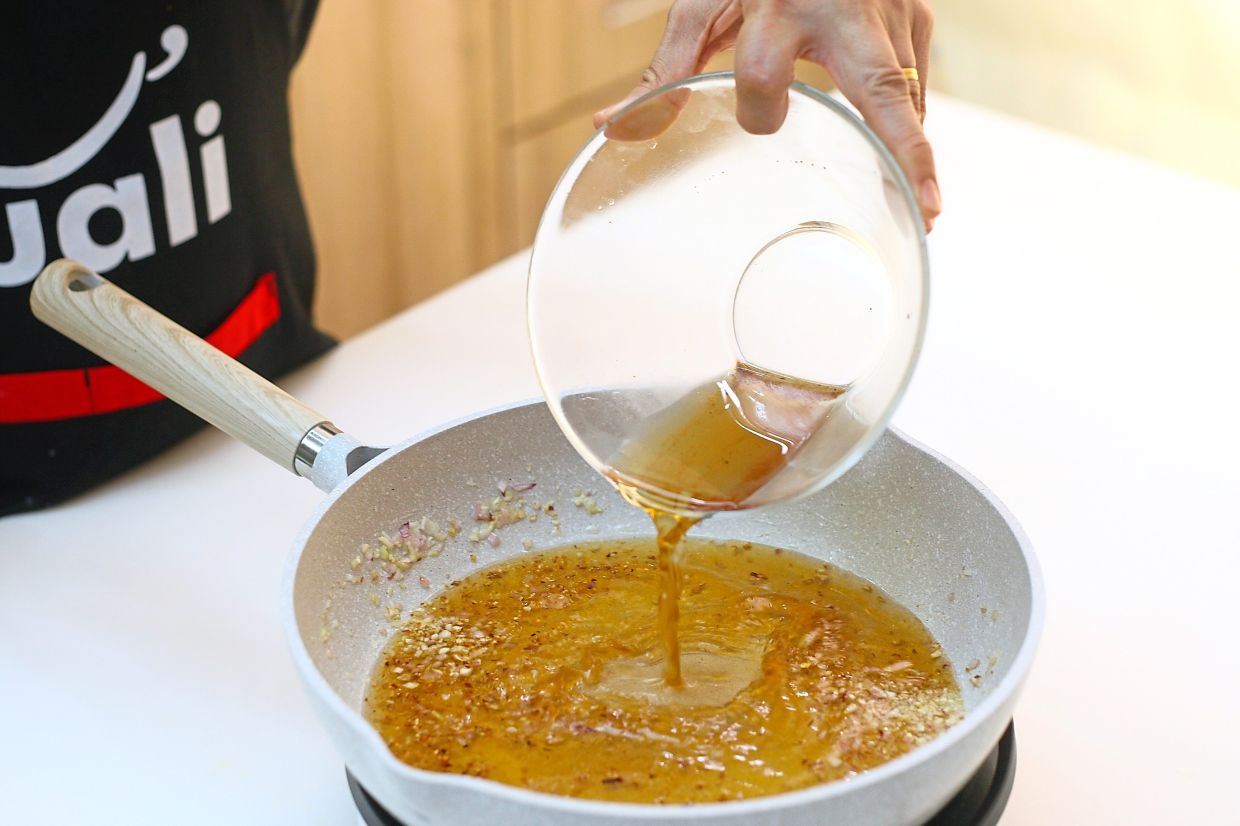 Retro Recipe: Vegetarian escargot Simple ingredients of vegetables and mushrooms can be transformed into a festive meal and you may even add hair moss for Chinese New Year. -AZMAN GHANI/The Star

Squeeze dry the stewed mushrooms, discard the stems and marinate the caps with seasoning ingredients for 30 minutes.

Dredge the marinated mushrooms in cornstarch and immediately deep-fry in hot oil until slightly golden.

Blanche broccoli and carrots and arrange them in a ring formation on a platter.

Retro Recipe: Vegetarian escargot Once the dressing is poured over the dish, serve immediately to enjoy the crispy exterior. -AZMAN GHANI/The Star

The mushroom infusion is not wasted as it goes into the dressing. Savoury, flavourful dumplings in time for Dragon Boat festival
Flavourful otak-otak parcels
Drinking in Chinatown’s heritage
Ordering in: Return of the meat queen
Scientists discover a way to prevent ice crystals in your ice cream
Ginger wine noodles at its best
Ros� wine is elevating its image with new blends and players
More seafood options at sandwich joint
Sales of raw honey soared during the pandemic, but what is it exactly?
Brewer’s mixed fruit beverage debuts in Malaysia