Sushma Koirala is excited that Deepavali is just around the corner. She knows the Festival of Light as Tihar, for that’s what it’s known as in Nepal.

“Tihar is one of Nepal’s main festivals. It is celebrated over five days with rituals and rites. It is a must to have lots of food, houses decorated with lights and merry-making, ” says Sushma, 38, who moved to Malaysia in 2002, after marrying Nepalese Ramesh Bahadur, 49, who lives in Rawang, Selangor.

A Nepalese feast for Tihar | TheStarTV.com

On Saturday, Nepalese Hindus will start their festivities with Kaag Tihar, their first day of celebrations dedicated to crows.

It is followed by Kukur Tihar, in honour of dogs. Gai Tihar (cow festival) and Laxmi Puja (goddess of wealth festival), and Goru Tihar (oxen festival) are celebrated on the third and fourth day, respectively. The fifth day – Bai Tihar (brother festival) – is the most important as it emphasises family relationships. Bai Tihar, which celebrates family relationships, is one of the most significant days of Tihar. Breads and salads aren’t really food Malaysians are used to having during Deepavali open houses. Many Malaysian Indians originate from South India and over the years, people have grown accustomed to eating Tamil cuisine staples like thosai, idli, curries, varuval and chutneys.

But in Malaysia, there are many smaller Hindu communities that celebrate Deepavali too. Sushma’s family is one of only 50 Nepalese families who reside in Rawang. Some live in other parts of Kuala Lumpur or have moved elsewhere in Malaysia or abroad.

Their unique food is inextricably linked to their culture. To ensure their tradition lives on, the close-knit community take extra efforts to prepare Nepal’s scrumptious delights for the Festival of Lights. During Tihar, Sushma gets to cook many celebratory dishes for her family.

Sushma takes pride in being the custodian of her family’s recipes, which she learned from her maternal grandmother and mother.

“Thankfully, I managed to learn many traditional Tihar dishes before I settled down in Malaysia. Must-haves during Tihar are sel roti (a sweet fried bread), fini roti (a savoury fried bread), and anarasa roti (a fried bread made from rice flour, jaggery, and sesame seeds).

“Due to the pandemic, my family and I can’t travel to Kathmandu for Tihar. I do feel homesick, and I miss my parents and siblings in Nepal very much. To remind me of home, I ensure these traditional dishes are prepared just like my mother makes them, ” says Sushma.

One of the festive food on the family’s Tihar menu is the immensely popular and enjoyable sel roti. It resembles a deep-fried doughnut and is composed of ground uncooked rice, water, sugar and ghee. Some people use a piping bag to make the ring-shaped rotis, but Sushma does it the traditional way with her hands. She scoops and holds the thick batter in her fist, and deftly drops the batter into the hot oil in a circular motion to form large rings.

It’s impressive how Sushma has total control of the slippery batter and is seemingly unfazed by the heat from the bubbling hot oil.

“The secret is you have to be quick to make the rings. Another trick is to ensure the temperature is just right. If the oil is too hot, the batter will brown too quickly. If the oil isn’t hot, the roti will absorb too much oil, ” explains Sushma while removing the freshly made rotis from her cast iron kadhai (wok).

The waft of the fresh doughy rings permeates in the air, much to the delight of Sushma’s two daughters – Anchal Yashka, 17, and Lakshanya Yashka, 11. Lakshanya (left) and Anchal light the diyas to welcome Tihar.

The sel roti has a doughy texture with a slight hint of sweetness. These copper halos have crunchy nuances that come from the blended rice granules. The sweetness has to be just right to pair with curries, dhal, a cup of tea, or eaten on its own.

Still, sel roti is best paired with khukura ko masu. This chicken dish is marinated with blended onions, ginger and garlic and a pinch of chilli powder. It is mild in taste, with the distinct earthiness of turmeric, ground cumin and coriander seeds. Sushma explains these are the main spices used in most Nepalese dishes, be it curries, vegetables, and dals.

“Nepalese food is less spicy compared to South Indian curries and peratal. Our dishes are milder because we have Tibetan, Chinese and Indian influences. “But over the years, I’ve learned to add extra spices and chilli powder to my dishes to cater to Malaysians’ taste buds.”

Then there’s the addictive aalu kakra achar, one of Nepal’s most common dishes. It consists of boiled cubed potatoes, diced cucumbers, sliced onions mixed with roasted sesame powder, chilli powder with a dash of lime juice, and fenugreek-infused oil.

The combination of the sesame powder and infused oil gives the salad a nutty, and bittersweet flavour. The lime juice and chilli add extra zest and hints of spiciness to each mouthful of crunchy cucumbers and dense potatoes.

“Tihar is all about spending time with the family and enjoying good food. Hopefully, more Malaysians will try out our food and learn more about our culture too, ” says Sushma with a warm smile. 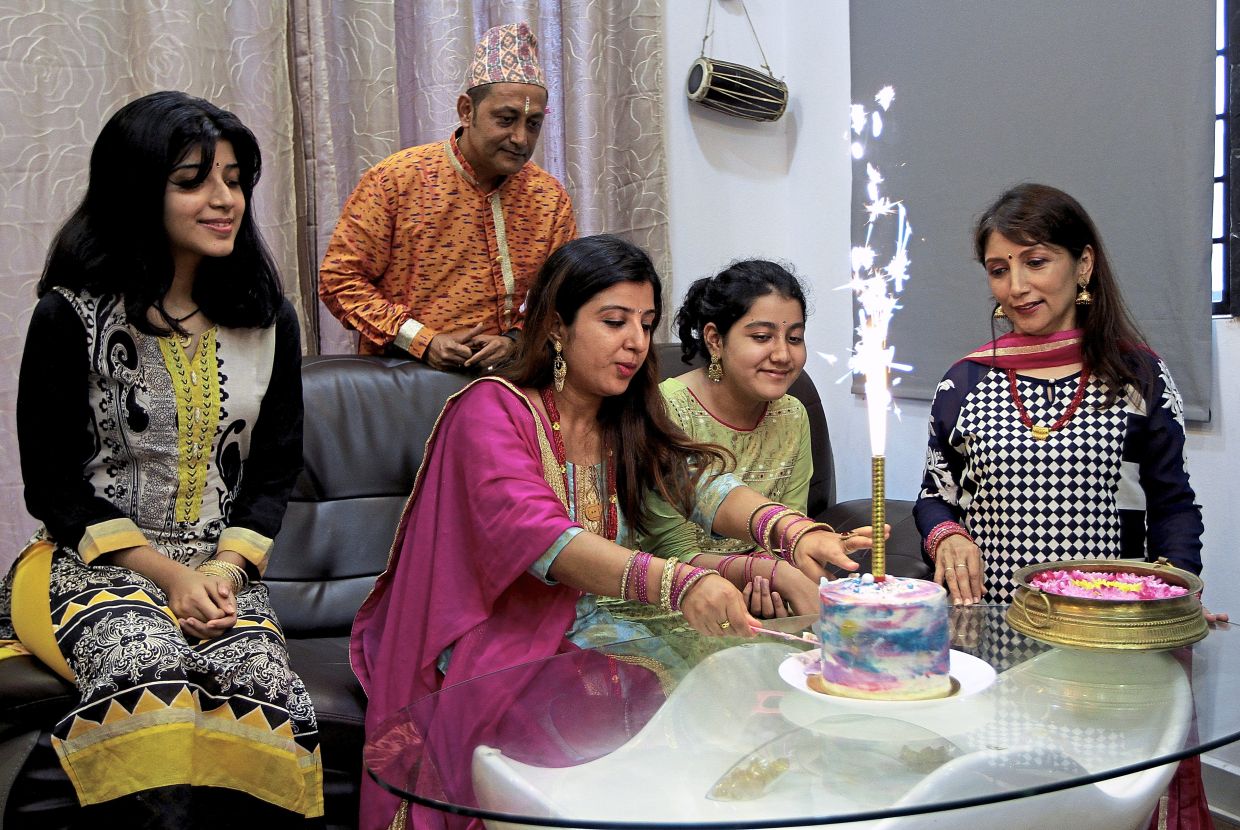 Sushma (second from left) and her family won’t be able to go home to Nepal to celebrate Tihar this year, but they will still mark this festival joyously.

Drain water from rice and blend all the ingredients (except oil). Grind finely. Set aside.

Add cooking oil to the wok. Take a handful of the blended paste and gently drop it in the pan to make a circular shape. Or use a piping bag. Fry till golden brown. Remove from the heat and serve hot.

In a separate pan, heat the cooking oil and temper the fenugreek till golden brown, about 1 minute. Switch off the fire and quickly add chili powder and turmeric powder. Saute till aromatic.