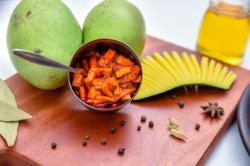 Seh (right) learnt how to make traditional Indian pickles from her husband’s grandmother Sellamah, and is on a journey to master more heirloom recipes. — Photos: SHARMINE SEH

Growing up in a Punjabi-Chinese household, 36-year-old Sharmine Seh never really had a fondness for Indian-style pickles.

“When I was younger, I didn’t really fancy pickles because I didn’t know how to appreciate it, ” she admits.

All this changed when Seh married into an Indian family and eventually became pregnant with her first child. Besieged with all sorts of pregnancy cravings, she found herself constantly longing for strong, sour meals. Her husband’s grandmother, 85-year-old Sellamah Nadason was only too happy to oblige and started making Indian pickles to satiate her cravings.

“Patti (term of endearment for grandmother) was brought up here but her grandmother was from India and used to make pickles all the time and taught it to her daughter, who taught it to Patti.

“When I was pregnant, Patti started making pickles for me – that is when I started eating pickles in earnest and I really loved it. And eventually as I had kids, she just continued making more and more for us, ” she says.

Seh now has four children and Patti continues to make pickles for them to this day. All of her kids are reputedly big fans and eat a serving of pickle a day with their meals! 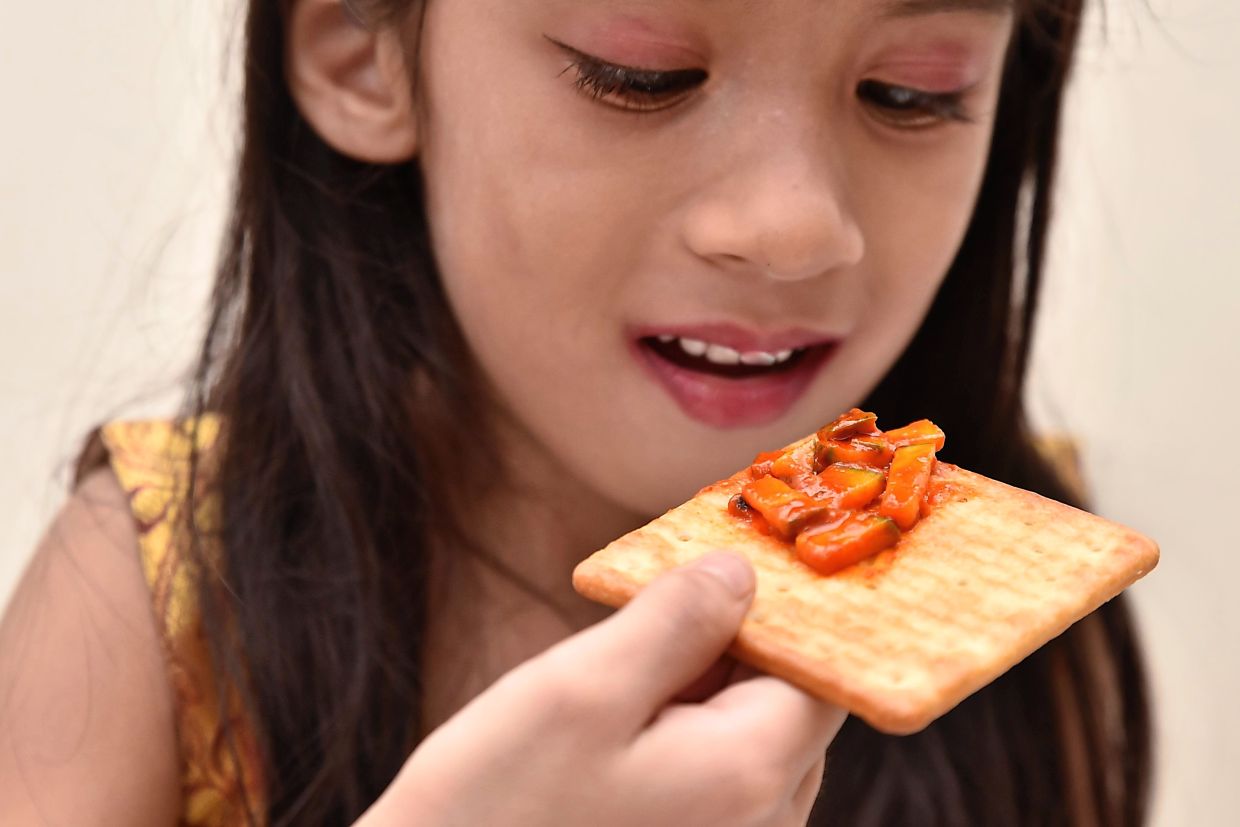 Seh’s children love the authentic Indian pickles that are available in the household and can’t go even a day without eating pickles!

Buoyed by her experience of eating Patti’s pickles and her children’s love for it, Seh herself started learning how to make pickles from Sellamah and became so adept that she started selling her homemade pickles a few years ago.

“When I started making pickles, I used to bottle it and give it to my siblings, my cousins and eventually my colleagues and friends. So everyone enjoyed eating them and I thought why not share the love of pickles with more people, ” she says simply.

Seh has opted to focus on the three heirloom recipes she inherited from Sellamah – namely mango pickle, lime pickle and mixed vegetable pickle, all of which are more traditional in the realm of Indian pickles. Each pickle is painstakingly made from scratch and Seh does everything herself – from choosing the raw ingredients to pickling, cooking and bottling.

“It was quite challenging when I first started making it because if I did not handle the pickle with care, whatever I pickled would spoil, especially if I used wet hands or wet spoons. So your surroundings have to be dry and clean, ” says Seh.

Seh says making pickles is also quite a labourious, time-consuming affair. Her mango pickle, for example, is pickled with salt and kept in a sealed glass jar for up a to a week. The mangoes are then cooked with spices like cardamom, cumin seeds and mustards seeds until the mixture is absorbed. She then sterilises and cleans the bottles for the pickles, ladles the pickle into the bottles and tops this with a layer of mustard oil to preserve the pickle for a longer period. 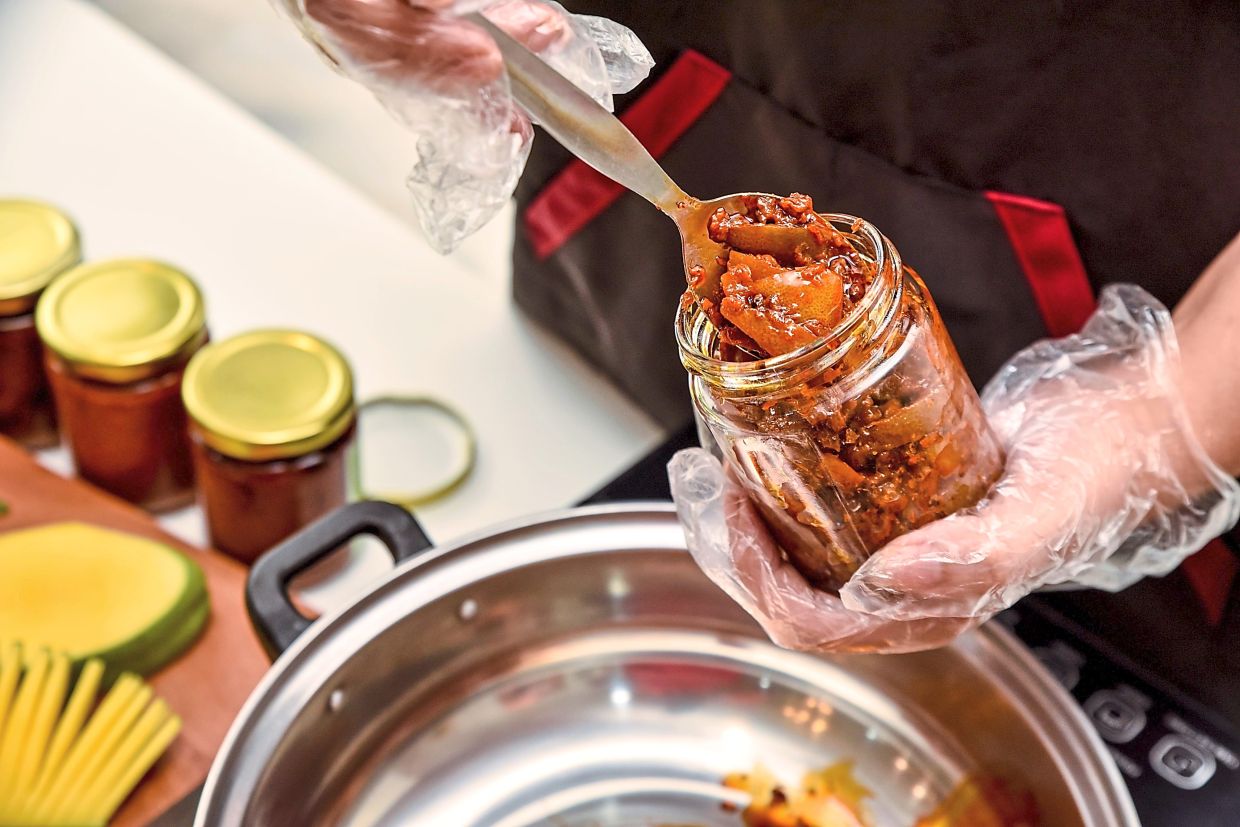 Pickles must be stored in sterilised jars to ensure a longer shelf life.

Over the years, she has also discovered more tips and tricks to perfecting Indian pickles. The salt used for pickling, for example, is crucial to maintaining colour, as pickles can otherwise turn dull, resulting in an unappetising hue.

“When Patti makes pickles, she doesn’t like to keep it for very long. But when we did keep it for longer, I realised the colour turned darker and Patti didn’t know why this happened. But when I actually did some research, I found that some salts are better suited to making pickles like kosher salt, which does not contain iodine and helps preserve the pickle’s colour, ” explains Seh.

Seh’s pickles are reminiscent of the sort of home-hewn, old-school Indian pickles many Malaysian Indians are likely to have grown up with. Her lime pickle for instance, boasts a strong astringent, lip-puckering quality while the mango pickle features large, firm sour mango chunks against a spicy underbelly. Both pickles are delicious and each one is kept adrift by a layer of mustard oil, which is in keeping with the traditional aspect of heritage pickle recipes.

Moving forward, Seh says she hopes to master inji puli (a traditional ginger tamarind pickle popular in south India), which has so far proven to be a Sisyphean task.

“Whenever Patti does it, it turns out well, but whenever I try to do it on my own, it doesn’t – it’s always missing something. So I just have to practise more and make sure it turns out right, ” she says determinedly. Seh uses mustard oil when making her traditional pickles, as that is what Sellamah taught her to do.

As she herself didn’t really grow up eating Indian pickles, Seh is quite aware that these pickles do not have a strong presence in mainstream food consciousness in Malaysia. In fact, many people who are not Indian have neither heard of nor tried Indian pickles at all, a fact Seh is hoping to change a little at a time.

“My personal opinion is that Indian pickles are not really advertised the way other products are, so other communities may know a little about it but not much about how it is consumed or what ingredients are in it.

“For instance, I have a full-time job so when I started making pickles, I brought it to the office for my colleagues to try. My colleagues are all Chinese so when I showed it them, they asked a lot of questions like ‘What is this?’ or ‘Is it very spicy’. I could tell they wanted to try it but they were a bit scared, ” she says.

Seh eventually got her colleagues to try a bottle of mango pickle and lo and behold, they were hooked! These days, her workmates have stocked the office pantry with bottles of her pickles and every day at tea time, they slather the pickle on slices of bread – something that even Seh finds difficult to get used to. 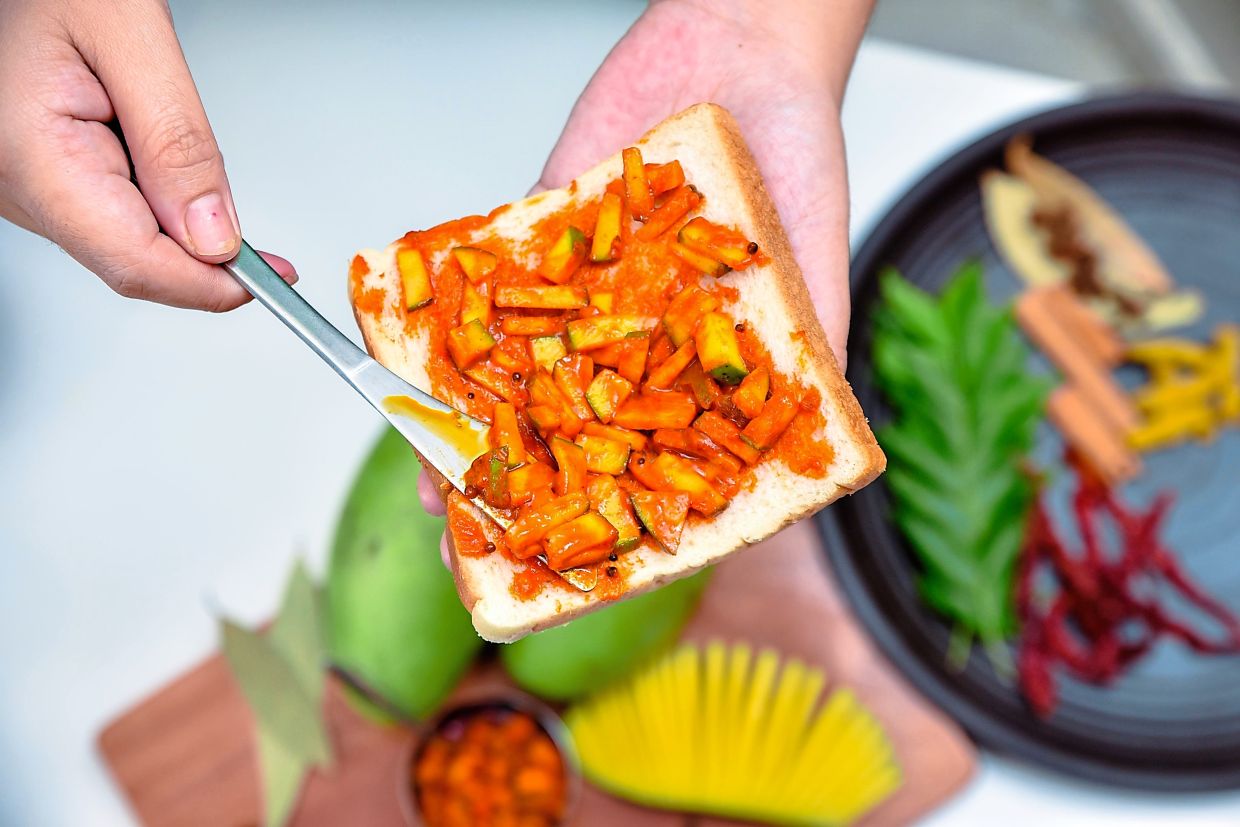 Seh's non-Indian colleagues have become big fans of her pickles and love spreading it on bread as part of their tea time ritual.

Seh has also introduced pickles to non-Indian customers who cater from her husband’s family’s catering business, a scheme that has earned her a bigger pickle fan base over the years.

“When we have catering orders, I usually try to include some pickle samples, especially if the customers are non-Indian. Then I will send them a text to explain what the pickle is and what the process for making it is and how long it can last.

“Normally, I get feedback that it tastes good with plain rice. So that’s how I have gotten an increasing number of non-Indian customers ordering the pickles on a monthly basis, ” says the enterprising Seh.

Wash and clean the mangoes. Cut the mangoes into small cubes (bite-sized pieces) and leave skin on.

Add the ingredients for seasoning to the mango pieces and stir well so that all pieces are equally mixed with turmeric and salt. Keep the mixed mangoes in a glass jar or ceramic bowl for a few days.

After a few days, remove all the secreted juice from the mango and prepare for pickling process.

On medium heat, add 3 tbsp of mustard oil in a pan. Then add mustard seeds, fennel, cumin and fenugreek seeds and let it splutter. Add the turmeric powder and chilli powder. Let it cool down and add the seasoned mangoes into the prepared pickle sauce. Mix well.

Store in a glass jar or ceramic bowl for an additional 2 days. Be sure to fill the jar with mustard oil. The mustard oil should float above the pickle. Stir every day to mix well.

The mango pickle can be served after marination. Always use a clean and dry spoon so that there is no moisture when you take the pickle out of the jar.

A brief history of Indian pickles 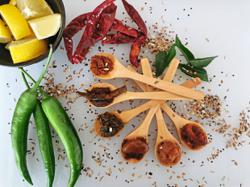 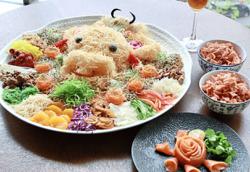