Food and restaurant trend predictions for 2020 from F&B experts A trend is an encapsulation of a zeitgeist – in many ways capturing the appetite for a particular entity in much the same way a photograph immortalises a moment in time. It is a snapshot of what’s current and pervasive – and when you look back on it a few years from now, it can also serve as a testament of how things can change quite dramatically over time.

In the F&B world, trends can heavily influence purchasing patterns and decisions and even determine how restaurants, supermarkets and other service providers run their businesses – even if the trend itself ultimately proves impermanent.

With that in mind, we’ve trawled through the data on food trends in 2020 and picked the brains of local F&B mavens in an effort to decode next year’s biggest culinary hits.

Consumers are increasingly driven by health concerns and expect their food to deliver a cocktail of health benefits. According to a 2018 Euromonitor International report, most consumers’ No 1 concerns now surround gut health. Among middle-class consumers, foods rich in probiotics like kimchi, tempe, yoghurt and kefir will continue to grow. “Consumers are getting more conscious about their food consumption in terms of nutrition, sustainability and experience. Healthy eating will continually be a big part of food consumption trends for the coming years, ” confirms Geoff King, the chief executive officer of The Food Purveyor Sdn Bhd, which owns local gourmet supermarkets like Village Grocer and Ben’s Independent Grocer.

Being vegan has never been more trendy. According to Asia-based brand communications company CatchOn’s 2020 food trends report, in South-East Asia, there has been a 140% increase in new vegetarian food and drink products released from 2012 to 2016. Similarly, vegan claims increased by 440% in the same period.

In Malaysia, vegetarianism is not exactly new but in line with growing awareness about environmentalism and animal welfare, an increasing number of middle-class Malaysians are embracing plant-based food. Last year, vegan grocery store Vegan District opened in Petaling Jaya and there is even a Malaysian producer of plant-based cheese, called My Plant Deli. Plant-based alternatives have been on the rise globally and even in Malaysia, vegan producers like My Plant Deli, which produces vegan cheese, are thriving. — Filepic

“Dietary alternatives like cauliflower rice and meat diet substitutes like the jackfruit are some of the healthy food alternatives that are now available at our stores, ” says King, who has previously said that more Malaysians are also now buying plant-based milk like almond milk.

Perhaps the biggest trend to make a splash globally last year was the rise of plant-based “meat” producers like Beyond Meat and Impossible Foods, both of which popularised plant-based meat patties, said to taste exactly like meat (the patties even bleed like real meat). In the United States now, 95% of grocery stores sell plant-based meat options, according to the CatchOn study.

This year, plant-based fish is also likely to become a big trend, as companies like Tuno are developing faux fish fashioned out of soy protein and seaweed.

While Singaporeans have been able to get their hands on these plant-based meats already last year, Malaysians have thus far been left out of the game. But if the trends are any indication, this could change in 2020.

TRENDS IN MID-RANGE AND HIGH-END RESTAURANTS

More high-end restaurants are seeing the need to espouse transparency in their kitchens.

An open kitchen gives diners front row views of the inner workings of restaurant kitchens, depicting clearly how chefs interact with each other and handle food. As chefs look to showcase how they work and what’s in their kitchen, open kitchens could soon become the norm in the future. — Filepic

“I think the open kitchen is going to be a big trend. I see more restaurants opting for this to showcase to customers what they are actually preparing, ” says Raymond Tham, the head chef at European restaurant Skillet in Kuala Lumpur.

Meriam Alfonso, the owner of local Kerala restaurant Kayra, says she opted to have an open kitchen at her new restaurant in Bangsar because “I want people to see how Indian food is prepared and that our kitchen is very clean and hygienic.”

A study conducted this year by drinks-focused accelerator Distill Ventures on bars in London, New York and Los Angeles found that non-alcoholic drinks a.k.a mocktails are increasingly very popular, thanks to a millennial-driven ‘sober curious’ movement. In fact, the study showed that 61% of Britons wanted better choices in non-alcoholic drinks.

Meanwhile, in high-end Nordic restaurants like Denmark’s famed three-Michelin starred Geranium, juice pairings have taken off with a bang. More local restaurants are likely to start offering juice pairings and an even wider range of alcohol-free mocktails this year. — Filepic

In Malaysia, this trend is likely to grow too although probably in a more organic sense as mocktails and juices are already common in many local restaurants, given the high proportion of the Malaysian population who do not consume alcohol.

But encouragingly, some restaurants like Tham’s Skillet are starting to do juice pairing meals as alternatives to wine pairing meals.

“I think definitely more restaurants will start to have juice pairings because I foresee more people will be health conscious and cut down on their alcohol, so more people will go for juice instead of alcohol. This is in tandem with a movement towards healthier eating and drinking, ” says Tham.

In the past few years in Malaysia, there has been a noticeable shift towards sustainable, locally sourced produce on the menus of top restaurants across the country, from Dewakan to Nadodi, Entier French Dining and many others.

Unsurprisingly, this trend is only likely to grow, given the quality of local artisanal producers peppering the culinary landscape from Chocolate Concierge’s artisanal farm-to-table chocolate to the local cheese produced by Milky Whey, Western style vegetables like kohlrabi and purple carrots farmed by local farmers Weeds & More and even tropical caviar from T’lur Caviar. Malaysian produce, like T’lur Caviar (pictured here) has increasingly made its way to some of KL’s top restaurants, a trend that is only likely to grow this year. — Filepic

“Oh yes, it’s growing and we’re not talking about chef-driven restaurants. We are talking about just regular restaurants, a lot of people are into local produce now, especially when more established chefs are using certain ingredients – more chefs are following suit.

“Right now we have amazing oysters coming from Penang and we have more and more people producing kelulut honey, amazing sweet corn and even green asparagus. So for sure, this will continue to grow, ” says Chai Chun Boon, the chef-owner of Copper Restaurant.

In 2020, the restaurant industry in Malaysia will likely experience a seismic shift in terms of how owner-led businesses run their eateries. According to Darren Teoh, who helms modern Malaysian eatery Dewakan (the first Malaysian restaurant on Asia’s 50 Best Restaurants list), more and more restaurants will be looking at setting themselves apart.

“I feel that within the restaurant industry, people will want to distance themselves from being identified with the industry so that as a restaurant or an eatery, they will be able to distinguish themselves from other restaurants, so I think that is something that most restaurants will work towards, ” he says. Teoh thinks that next year, smaller owner-led eateries will form more coalitions based on their commonalities. — Dewakan

Teoh also feels that restaurants that share similar values and mindsets will likely band together and form alliances that reflect their commonalities.

“One of the things that you will find that will happen quite a bit more is that smaller businesses will form alliances and there will be a lot of cross-pollination going on between F&B outlets. As businesses become more owner-led businesses, there will be different alliances coming up, ” he says citing the Good Food Alliance (which counts restaurants like MyBurgerLab and Table & Apron as members) as an example.

Kitchen karma was a big theme at this year’s World’s 50 Best Restaurants event in Singapore. Revered French chef Eric Ripert, who helms the acclaimed Le Bernadin, revealed how at one point, he was so feared in his restaurant that total silence would descend when he walked into the kitchen.

While restaurant kitchens are notorious for being volatile, unstable environments where chefs slave for long hours on minimum wage, Ripert is now a big believer in having a decent work-life balance.

“It takes discipline to tell yourself to work 10 hours a day and five days a week or take vacations because it wasn’t in the culture when I was growing up. Now, I force my team to take time for themselves and do what they like to do – other than cooking, ” he says.

This philosophy of being kinder in the kitchen has filtered down to some restaurants on the local front. Although change has been slow in coming, encouragingly some chefs are embracing the fact that being kind and compassionate can go a long way towards encouraging better talent. In America, 95% of grocery stores now sell plant-based meat and given the increasing popularity of veganism in Malaysia, these products could soon be available here too. — Bloomberg

At Ember Contemporary Bistro in Taman Tun Dr Ismail for instance, chef Gary Anwar is leading the charge for change. At his eatery, chefs work five days a week and typically clock in between eight to 10 hours of work a day, unheard of in most other eateries.

“I know what it’s like to work long hours and not spend any time with your family, so to me, it is important that my team gets to spend time with their families and work decent hours, ” says Gary.

Given the fact that most urbanites have very little time to cook on a daily basis, some local chefs feel that next year, the restaurants that will be in trend will be casual pick-and-go eateries where people can grab things like wraps, sandwiches or poke bowls on their way back from work or even during busy lunch hours.

“I think there will be more pick-and-go establishments setting up next year. I think the trendy, chef-driven restaurants will probably slow down next year compared to previous years, ” says Chai. 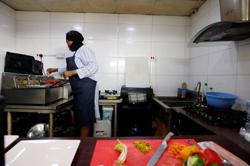