Getting it right: Central Market caricaturist Anas Hanafi hard at work in his cubicle.

THE way to go with the current crop of emerging artists is to pay heed to three crucial catchphrases — ‘out there’, ‘shock value’ and ‘right time’.

Dwelling on the second point, Izat Arif Saiful Bahri, 28, who obtained his fine art degree from Camberwell College of Arts in London and now co-owns Kedai, an art space for upcoming artists at Dataran Glomac in Kelana Jaya, said it helps if a work has multiple entry point characteristics, meaning the ability to convey a billion different messages.

Having said so, shock value, added Izat, was not a licence to offend as it can backfire for the artist. One example was when an independent artist was called in for questioning at the Serdang district police station after his artwork, printed on T-shirts, came under investigation for sedition. Together with his passport, authorities confiscated 22 shirts, roughly amounting to a loss of RM396.

There is, implied Izat, no need to offend in order to establish shock value. Case in point is a piece in Kedai titled Hidup Terlampau Senang (Life is Extremely Easy) by Akmal, with the letters simply scrawled across a blank canvas, with pencil markings still visible. This piece, which may have cost the artist no more than the RM50 to produce, is selling for RM2,500. Ng with her piece, Nyonya in Red.

Izat explained that to some it may be interpreted as a reference to conveniences afforded by the hi-tech age. To others, it may be a sarcastic way of expressing dissatisfaction over “unproductivity”.

“But for it to come across, all this has to be put into the correct context for the public to appreciate. Again, we talk about the right time — for example, when an artist’s work happens to coincide with a current topic of interest or debate — and the right place.

“You cannot display an image of an unclothed figure near a house of worship, for instance, because it will cause outrage,” Izat said.

Eventually artists would need a space to showcase their work. In this case, the rate at Kedai is RM2,000 for two weeks, negotiable. Since its opening, the gallery has been having one showing per month.

“We try to make it as organic as possible. If the fee is too heavy for the artist, then we will see if he is willing to be part of a group show instead of going solo, for example,” Izat said.

In defining ‘out there’, artist Ben Toh speaks about latching on to opportunities. When he first stepped foot in the Sentul East Design Centre (SEED) two years ago, the first thing he noticed was the vacuous expanse. That was when a great big light bulb flashed in his head to turn the empty shop lots into an art gallery. Xie with some of her sculptures.

“It made sense because the place was meant to attract design-related companies as tenants,” recalled Toh, 52.

After some negotiation, Toh was allocated a space of two shop lots to exhibit the works of emerging artists.

“We are still not thousandaires yet,” joked Toh in reference to gallery sales.

However, he has met two objectives. Firstly, to create a hub for art practitioners to mingle and network and, secondly, to fulfil a management directive to draw as many people as he can to the centre, using art as a marketing and promotion tool to increase tenant numbers, in turn, driving traffic to the gallery.

Since The Refinery opened its doors, they have organised some 14 art exhibitions, 17 art jams and six talks. By rough estimate, Toh and his colleague, art teacher and fashion designer, Ellie Ng, 36, have hosted some 1,700 people.

“There is no jumping or short cuts. It’s about hard work,” said Ng on what it took for a new artist to gain recognition. Escapeva is selling stickers for RM5 and prints for RM50 but it will cost RM200 to get an original sketch.

Ng, who also makes dresses, styles and assists photographers, said while chances and contacts may play a part in the road to fame and riches in the art industry, the way to maximise an artist’s chance of selling her work was to have as many viewings as possible.

It helps if an establishing artist can think out of the box when it comes to looking for potential display avenues, said Gary Lim, 52, a sculptor-cum-gallery owner.

“One artist I knew went to a hospital and allowed them to use his work to decorate their walls for free, on condition he was allowed to put his name and contact number on his work,” Lim revealed.

It is not unheard of for artists to sell their work cheap during the early years of their career, said sculptor Maxine Xie, now in her 50s.

“Four years back, I sold my work for only RM100 at the Art For Grabs event in Central Market,” recalled Xie. 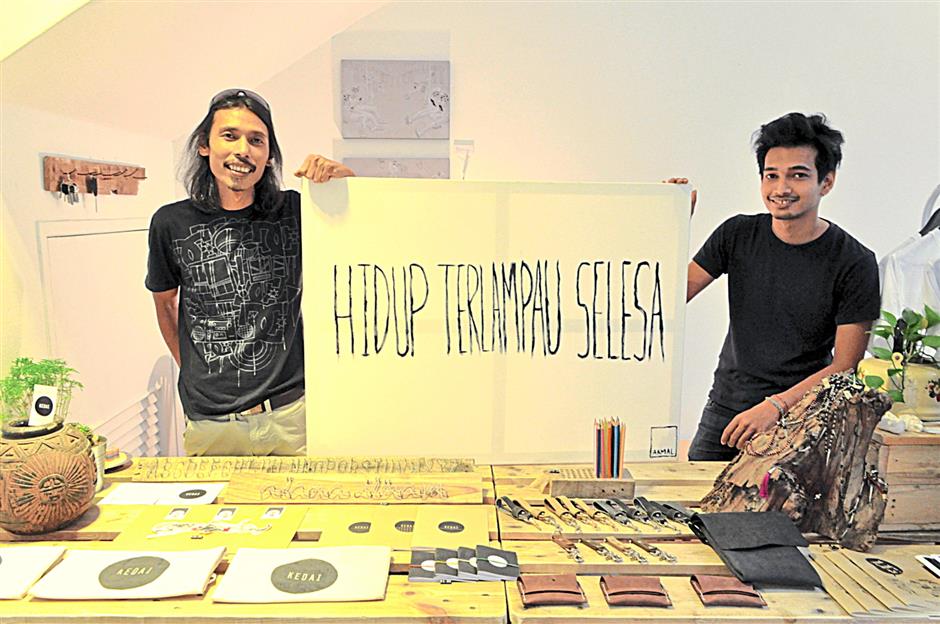 Today, her wood sculptures may cost collectors anywhere from RM1,800 to RM5,000. Not surprisingly, as her work has grown and matured in terms of style and size.

For Xie, experience matters. Art is not about how much it will cost the creator to put forth a collection but about the number of notches on one’s belt.

A diploma holder in art and design from the Kuala Lumpur College of Art, Xie has been exhibiting her work since 2000 and is a life member of the National Visual Arts Gallery.

Meanwhile, it helps if an artist has the right mindset for business.

Graffiti artist Mohd Zaki Nordin, 28, who calls himself Escapeva and just had his first solo Can Control in Kedai, revealed the many ways an artist can garner a following. The trick is not only to think “high end” but in terms of consumables like putting one’s work on printed stickers for example.

At Can Control, prices can start from as low as RM5 for a sticker right up to RM3,000 for large canvasses and commissioned wall paintings.

“When I first started my visual art company, my father’s advice was to treat it like I would a baby. You start with baby steps, building it day by day. The other thing is to be professional. Portfolios, sketches, agreements, deposits, customer satisfaction, best business practices, the works,” said Escapeva.

However, not everything is about dollars and cents. Last March, Tan Shen Ru, a 46-year-old who works for RT & Q Architects by day, exhibited her first abstract collection in Sentul East Design Center (SEED).

A closet painter, Tan had invested some RM5,000 in her debut show. Starting prices for her work began at RM1,800 with the most expensive piece, a life-sized riot of colours, at RM 12,800.

The biggest step Tan took was not in coughing up the RM5,000 but in having the courage to put her work on display.

Then, there is Anas Hanafi, a full-time caricaturist and portrait artist in Central Market who will draw you a funny face for RM50 per head. His largest project to-date, since acquiring his own booth three years ago, is an A1-sized portrait in pencil for RM1,600, about just right to cover a month’s rental for his cubicle.

“There are two paths for an artist. One is to fulfil the needs of society, in terms of commissioned work. Another is to listen to your inner emotions. You cannot merge the paths or you risk insanity,” said Anas.

Lim knows of famous artists who will accept commissioned work but will refuse to associate their names with the project for fear it will tarnish their reputations.

In the end, Anas’ vote is for artistic satisfaction.

“There are times when a customer’s criticism can hurt more than an empty wallet,” he concluded. 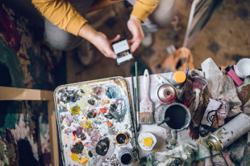