PETALING JAYA: While the uncertainty in global markets remains a huge concern, the Employees Provident Fund (EPF) is “not ignoring” indicators that suggest improvement, and therefore remains “cautiously optimistic”.

Chief executive officer Datuk Seri Amir Hamzah Azizan said these indicators included the possible peak in global inflation and the US’ Federal Reserve’s hints that interest rate increases will begin to slow in the coming months. 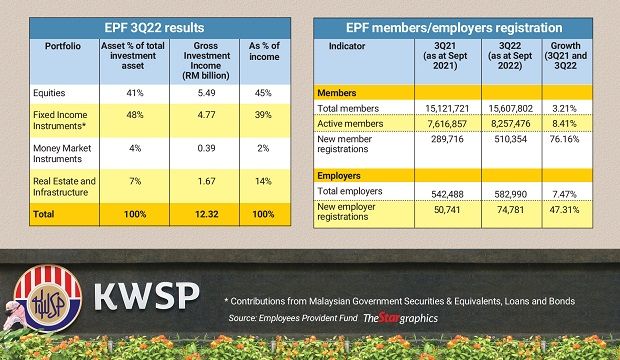 “From an investment standpoint, the EPF remains resilient and focused on what we can control, namely asset allocation, costs, and an overarching strategy that emphasises long-term sustainability of our investments and returns,” he said in a statement.

Total gross investment income for the third quarter ended Sept 30 (3Q22) amounted to RM12.32bil, a decrease of RM1.65bil or 12%, compared to RM13.97bil in the corresponding period in 2021, its release yesterday noted.

Amir said the economic recovery in Malaysia served as “fertile ground” for investments and opportunities that will spur economic activity, jobs, and faster movement of people and goods.

This would be an opportune time for institutional investors like the EPF to reconfigure its business strategy in order to position for short-term endurance along with long-term resilience and growth, he added.

As at end September, EPF’s assets under management totalled RM961.01bil.

For the quarter under review, equities contributed RM5.49bil or 45% of total gross investment income. Despite heightened market volatility, EPF said it managed to register quarter-on-quarter growth of 13%.

Private equity which is also part of this asset class, delivered realised returns of RM1.09bil or 20% of total equities income recorded.

The retirement fund stated fixed income instruments, which serve a capital preservation role in its portfolio, have been the “anchor” for EPF and continued to provide a steady stream of income, mitigating the impact from short term market volatility and providing stability for EPF’s overall income.

“This asset class, comprising Malaysian government securities and equivalents, as well as loans and bonds, contributed 39% or RM4.77bil, to EPF’s gross investment income for 3Q22.”

Meanwhile, real estate and infrastructure registered an income of RM1.67bil, while income from money market instruments generated RM0.39bil, in line with the return expectations set for these asset classes, EPF said.

In 3Q22, EPF’s overseas investments, which make up 36% of its total investment assets, generated RM5.28bil or 43% of total gross investment income recorded.

Former investment banker turned private investor Ian Yoong Kah Yin reckons EPF’s performance next year will show “a slight improvement” as its new investments reap the benefits of the marked increases in global interest rates amid equity prices on Bursa Malaysia coming off their lows of 2021.“While the performance of equities on Bursa will be lukewarm in 2023, the prospects of a global recession in my view, has been priced in,” Yoong told StarBiz.

“As a rough guide in gauging EPF’s fund performance, it is worth noting that Singapore’s Temasek Holdings’ total shareholder return over ten years is 7%.

“As EPF’s dividend is most likely a substantial portion of shareholder returns (it is not publicly disclosed), its ten year performance is deemed to be equally as impressive as Temasek’s.”

“As 2022 has been abysmal for global equities and Bursa is no exception, EPF will most likely declare a dividend rate of 5% and 5.5% for this year which will be at the lower end of its 10-year range.”

Notably, under Section 27 of the EPF Act 1991, the guaranteed minimum dividend rate is 2.5% per annum, Yoong added.

“It is reassuring that members are guaranteed this minimum dividend rate which is respectable as bank savings rates vary from 2% and 2.5% per annum currently.”

Yoong also said it is “encouraging” that the EPF management has been conservative and has not delved into cryptocurrency, unlike some other global prominent funds, which effectively saw their investments “crash and burn”.

In its statement yesterday, EPF noted it continues to record strong growth of new member registrations at 510,354 for the period of January to September, adding to the total number of 15.61 million EPF members as at Sept 30.

“Economic disruption such as the pandemic and economic crises have highlighted financial vulnerabilities across multiple segments of the population. The financial impact has been even more apparent in the uncovered group, which is those who are not covered under any social security scheme,” the retirement fund said.

It therefore has been actively pursuing effective EPF coverage to promote old age income security beyond the formal sector, covering informal sector workers and those who are outside the labour force.

“The EPF is mobilising efforts through integrated and strategic collaborations with multiple institutions and organisations such as gig platform providers as well as supervisory and regulatory bodies.” 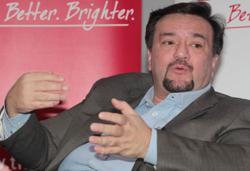