The company inked a memorandum of understanding (MoU) with the Sarawak government on the project in Tokyo recently.

According to a statement issued by the Sarawak Premier’s office, Hirotaka had said the plant would increase its workforce to 1,000 on operation of the expansion project.

Pertama Ferroalloys (formerly known as AML Manganese (M) Sdn Bhd) is the first to set up a manganese alloy and ferrosilicon smelting plant in Malaysia – at the Samalaju Industrial Park under Sarawak Corridor of Renewable Energy.

With an initial investment of US$300mil (RM1.4bil), the plant achieved full production of 22,000 tonnes per month of manganese alloy products in 2018.

The current installed capacity of 3,452MW in hydro energy generation, he said “has enabled Sarawak to offer the most competitive power tariffs in the region to energy-intensive industries.

“For companies involved in the ferroalloy smelting business in Sarawak, this will give them an advantage as their products will have an edge over other similar products that are made using fossil fuels.”

Under construction now is the 1,285MW Baleh hydro dam, which is expected to come onstream in 2026.

“In the face of looming climate change crisis and the race towards renewable or green energy, Sarawak is well-positioned to attract foreign investments banking on its huge hyro-power potentials,” Johari noted.

As Sarawak needs more skilled manpower in its development projects, he also said the state government has decided to grant expatriates a five-year working permit as an initiative to facilitate engineers and scientists to work in the state. 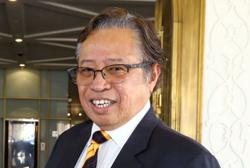