SINGAPORE: Emerging Asian equities gained on Tuesday as global sentiment improved after weak U.S. data raised hopes of a softer rate stance by the Federal Reserve, while currencies reversed their earlier losses due to subdued moves on the dollar.

"In this hawkishly priced risk environment, bad data is considered good news, as it raises the possibility of a dovish pivot by the Fed," SPI Management analysts said in a note.

Risk-sensitive Asian assets usually benefit from a tempered rate hike guidance by the U.S. central bank, as a rally in safe-havens such as the dollar and U.S. Treasury yields could slow down.

Investors will now eye U.S. non-farm payrolls data due later this week and key inflation data next week, which could indicate the trajectory of rate hikes by the nation's central bank.

Also aiding overall risk confidence on Tuesday was a back-down in policy by British Prime Minister Liz Truss over her mini-budget announced last week containing massive tax cuts, which had resulted in a wipe-out across global markets.

Among individual markets, Philippine stocks jumped as much as 3% to mark their best session in almost a month.

The South Korean benchmark advanced more than 2.5% to mark its best day in three weeks, led by gains in heavyweight chipmakers such as Samsung Electronics and peer SK Hynix.

Other indexes in Indonesia, Malaysia, Taiwan and Thailand rose between 0.7% and 2.1%.

Among currencies, the Indian rupee jumped about as much as 0.6%, emerging as one of the top gainers of the region, while other units such as the Philippine peso, the South Korean won, and the Singapore dollar pared their losses to climb 0.1%-0.3%.

The Thai baht also firmed about 0.6%, recouping its earlier losses, after the Bank of Thailand said that the nation's economic recovery was likely intact and inflation should ease the following year.

Both the Philippines and Thailand are set to reveal their September inflation prints on Wednesday, which could provide further indications on their respective monetary stances moving forward.

The Indonesian rupiah gained 0.3%, a day after data showed an acceleration in inflation for the previous month, even though it had missed market expectations of a 6% rise. The Taiwan dollar gained 0.3%. 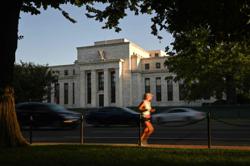