KUALA LUMPUR: Malaysia’s Producer Price Index (PPI) for local production eased further to 6.8 per cent in August compared to 7.6 per cent in the previous month, the Department of Statistics Malaysia (DOSM) said.

The department said the lower reading was attributed to the manufacturing index with a 9.4 per cent expansion (July 2022: 9.9 per cent), followed by the mining index which increased by 5.8 per cent, slower than the 9.0 per cent posted in July 2022.

DOSM said the water supply and electricity and gas supply indices recorded an increase of 3.0 per cent and 0.9 per cent in August 2022, respectively.

For monthly comparison, it said PPI local production posted a decline for three consecutive months to record minus 0.2 per cent in August compared to minus 2.3 per cent in July, driven by the mining index that recorded a decline of minus 3.7 per cent (July 2022: minus 3.6%).

"In addition, the manufacturing index also posted a decrease of negative 0.1 per cent in August 2022. It recorded the first decline since September 2020 ( minus 0.2 per cent) after posting an increase for 22 consecutive months.

"On the other hand, the agriculture, forestry and fishing index increased 2.5 per cent in August (July 2022: minus 22.3 per cent). For utility indices, the water supply and electricity and gas supply indices recorded an increase of 0.8 per cent and 0.1 per cent, respectively,” it said.

In terms of PPI local production by stage of processing, the department said crude materials for further processing index declined for the first time since January 2021, with minus 0.5 per cent in August 2022.

In addition, it said indices of intermediate materials, supplies and components increased 11.3 per cent, followed by finished goods with an incline of 2.9 per cent.

"For a monthly comparison, the index of crude materials for further processing declined by 1.0 per cent, followed by intermediate materials, supplies and components index ( minus 0.1 per cent). However, the finished goods index increased 0.3 per cent,” it said. - Bernama 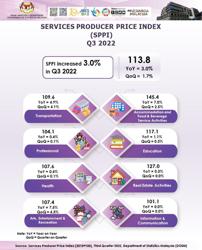 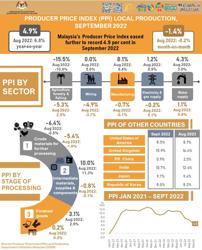