PETALING JAYA: Commodity prices that stoked inflation are falling fast and this includes crude palm oil (CPO), which saw prices tumble by almost a quarter in less than a month.

On June 22, Malaysia’s daily average CPO price fell to the lowest level this year at RM5,046 per tonne, about RM3,000 lower than the record-high price seen on March 2.

Some experts are predicting even cheaper CPO prices in the second half of 2022 (2H22), although on a full-year basis, the average CPO price is forecast to be above the RM5,000-per-tonne mark.

Fears of a recession, Indonesia’s U-turn on its palm oil export ban and the expected easing of the foreign worker shortage in local plantations have contributed to the normalisation in CPO prices.

The fact that the prices of other rival edible oils have also been falling weighed down the CPO performance.

Looking ahead, CGS-CIMB Research said Malaysian upstream palm oil producers would be more affected than their Indonesian counterparts as the former face a steeper rise in production costs, as well as a fall in CPO prices.

“Palm oil producers with estates in Indonesia are likely to see weak second-quarter earnings, as palm oil sales were disrupted by the export ban, leading to likely higher inventory as at end-June 2022.

“However, we predict earnings could rebound strongly in the third quarter of 2022 (3Q22) versus 2Q22 as inventory clears and the export sales volume normalises.”

CGS-CIMB Research also said the declining CPO price trend was broadly in line with its expectation.

The brokerage had forecast CPO prices to average around RM5,000 per tonne in 2H22 as compared with RM6,391 per tonne achieved in the first five months of this year.

“We expect demand for palm oil to be supported at the current price level of RM4,000 to RM5,000 per tonne as edible oil stocks at consuming countries remain low due to the earlier supply disruptions.

“A key area to watch is whether palm oil producers will be able to meet the market’s expectation of a stronger 2H22 palm oil harvest, as Malaysia faces an acute shortage of workers and the current high palm oil stocks in Indonesia have negatively impacted palm oil supplies from smallholders,” the brokerage said in a note.

Speaking with StarBiz, the outgoing chief executive officer of the Malaysian Palm Oil Association (MPOA) said the declining CPO prices were due to Indonesia releasing its palm oil stock that was built up during the short-lived export ban.

The sudden additional CPO supply in the market, however, is expected to ease soon.

Mohd Nageeb pointed out that there remains a shortage of edible oils globally, including CPO.

“At about RM5,000 per tonne, it is already a good price for the oil palm industry,” he said.

It is noteworthy that CPO prices have corrected 28% since Indonesia uplifted its export ban.

Indonesia, the world’s biggest shipper of edible oils, announced on May 19 that it would lift the ban on palm oil exports that the Joko Widodo administration had imposed three weeks earlier.

This was done following protests by local farmers and the threat to export earnings.

“After this CPO price correction, we are seeing some positives emerge to prevent further price deterioration.

“(First), it is commercially viable to increase the biodiesel mandate or non-mandatory biodiesel blending, and (second) demand recovery is in sight in India and China,” it said in a note yesterday.

UOB Kay Hian Research opined that a recovery in CPO demand is forthcoming in China after the palm olein price premium to soybean oil narrowed significantly.

On the other hand, India is expected to increase palm oil imports as the country usually increases the import of vegetable oil to meet the high festive demand.

Looking ahead, MPOA’s Mohd Nageeb said the demand for CPO would continue to grow, while the shortage of supply would be prolonged.

The shortage of sunflower oil, following the Russia-Ukraine war, would cause consumers to shift their demand to other edible oils, including palm oil.

According to Mohd Nageeb, Russia and Ukraine contribute 80% of the world’s sunflower oil supply.

“A shortage of CPO would prolong over the next one to two years, considering that many planters are not using fertilisers at the amount they should.

“This is due to the higher fertiliser cost. This would cause a decline in the production yield and supply, but the impact would only be seen in the next 18 months,” he said.

Mohd Nageeb also noted that the cost of CPO production has increased by RM500 per tonne, following the rise in fertiliser and labour costs.

“Nevertheless, the margin enjoyed by planters is still higher than pre-pandemic levels,” he added. 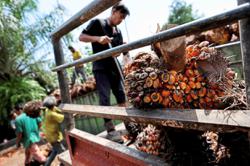