Azman said he acknowledged that the market has been discussing a merger between RHB Bank and AmBank for some time but no progress has been made.

Azman said he acknowledged that the market has been discussing a merger between RHB Bank and AmBank for some time but no progress has been made.

“Discussions (market talks) will continue but as of now, there is nothing more than talk and as for Grab, there is also nothing official.

“There are many proposals and we are reviewing them but nothing serious,” he told Bernama on the sidelines of the Perdana Leadership Foundation SME Leaders Programme 2022 themed “Knowledge Exchange for Entrepreneurship Excellence” yesterday.

Nevertheless, he said the bank is consistently enhancing its digital capabilities, paving its way into digitalisation as the way forward amid the digital banking frenzy.

He said the bank has launched an e-banking platform, partnering with other institutions in new areas and is exploring digitalisation within its existing structure despite not being in the run for a digital banking licence.

“Our e-banking segment has expanded rapidly and we have no choice but to join the crowd and the competition (which requires us to adopt digitalisation).

“We are constantly updating and releasing new products because (digitalisation) is the future,” he said.

It was reported that Singapore-headquartered e-hailing company Grab is interested in acquiring a stake in AmBank from the bank’s two largest shareholders, Australia and New Zealand Banking Group Ltd (ANZ) and Azman.

Azman has released his role as non-independent non-executive chairman of AmBank effective March 31, 2022, after the end of AmBank’s financial year.

Earlier this year, it acquired a 16.3% stake in Indonesian PT Bank Fama International to pursue banking opportunities in the archipelago. 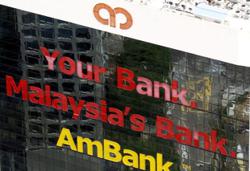