SYDNEY: Asian share markets were attempting a rare rally on Monday after Wall Street managed a bounce from deep lows, though investors were also braced for bad news from Chinese economic data due later in the session.

Forecasts are for a fall of 6.1% in China's annual retail sales, while industrial output is seen rising just 0.4%. Risks are to the downside given new bank lending in China hit the lowest in nearly four and half years in April.

"The reports should highlight the economic damage from the country's zero-COVID policy - we expect contractions in production and demand indicators," said Bruce Kasman, head of economic research at JPMorgan.

"Having lowered our full-year GDP forecast to 4.3%, the policy response to weakness remains surprisingly tame," he added. "The CNY is where the action is, as the PBOC has been silent despite the recent sharp depreciation."

Beijing on Sunday did allow a further cut in mortgage loan interest rates for some home buyers and there was talk the central bank might cut its medium term lending rate on Monday by 10 basis points.

Japan's Nikkei rose 1.2%, having lost 2.1% last week even as a weak yen offered some support to exporters.

S&P 500 stock futures edged up a further 0.3% in early trade, while Nasdaq futures added 0.6%. Both remain far from last year's highs, with the S&P having fallen for six straight weeks.

Sky-high inflation and rising interest rates saw U.S. consumer confidence sink to an 11-year low in early May and raised the stakes for April retail sales due on Tuesday.

A hyper-hawkish Federal Reserve has driven a sharp tightening in financial conditions, which led Goldman Sachs to cut its 2022 GDP growth forecast to 2.4%, from 2.6%. Growth in 2023 is now seen at 1.6% on an annual basis down from 2.2%.

"Our financial conditions index has tightened by over 100 basis points, which should create a drag on GDP growth of about 1pp," said Goldman Sachs economist Jan Hatzius.

"We expect that the recent tightening in financial conditions will persist, in part because we think the Fed will deliver on what is priced."

Fears that all this tightening will lead to recession spurred a rally in bonds last week, which saw 10-year yields drop 21 basis points from peaks of 3.20%. Early Monday, yields were up a shade at 2.94%.

The pullback saw the dollar come off a two-decade top, though not by much. The dollar index was last at 104.550, and within spitting distance of the 105.010 peak.

In cryptocurrencies, Bitcoin was last up 5.1% at $31,277, having touched its lowest since December 2020 last week following the collapse of TerraUSD, a so-called stablecoin.

In commodity markets, gold was pressured by high yields and a strong dollar and was last up 1.1% at $1,810 an ounce having shed 3.8% last week. 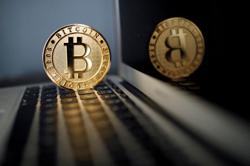