KUALA LUMPUR: Malaysia’s wholesale and retail trade sales increased by 8.5 per cent year-on-year (y-o-y) to RM117.2 billion in February 2022, according to the Department of Statistics Malaysia (DOSM).

However, month-on-month (m-o-m), the sales value of wholesale and retail trade slipped 2.5 per cent due to the 4.7 per cent contraction in the wholesale trade sub-sector.

In a statement today, chief statistician Datuk Seri Dr Mohd Uzir Mahidin attributed the better performance to the retail trade sub-sector which increased by 10.2 per cent or RM4.5 billion to RM48.8 billion.

"The retail trade sub-sector’s growth was supported by retail sales in non-specialised stores which grew 15.9 per cent or RM2.5 billion to RM18.3 billion.

Wholesale Trade also expanded by 6.2 per cent or RM3.3 billion to RM55.9 billion, with growth attributed to other specialised wholesale which increased by 6.0 per cent to RM22.3 billion.

"This was followed by wholesale of food, beverages and tobacco which grew by 9.2 per cent to RM10.9 billion," said Mohd Uzir, adding that the wholesale of agricultural raw materials and live animals also increased 15.9 per cent to RM4.7 billion.

He noted that the motor vehicles sub-sector had expanded by 12.5 per cent or RM1.4 billion to RM12.5 billion in February 2022, attributed to sales of motor vehicles parts and accessories which increased 27 per cent to RM3.5 billion.

Meanwhile, index of retail sales over the internet for February 2022 recorded 19.8 per cent growth y-o-y. - Bernama 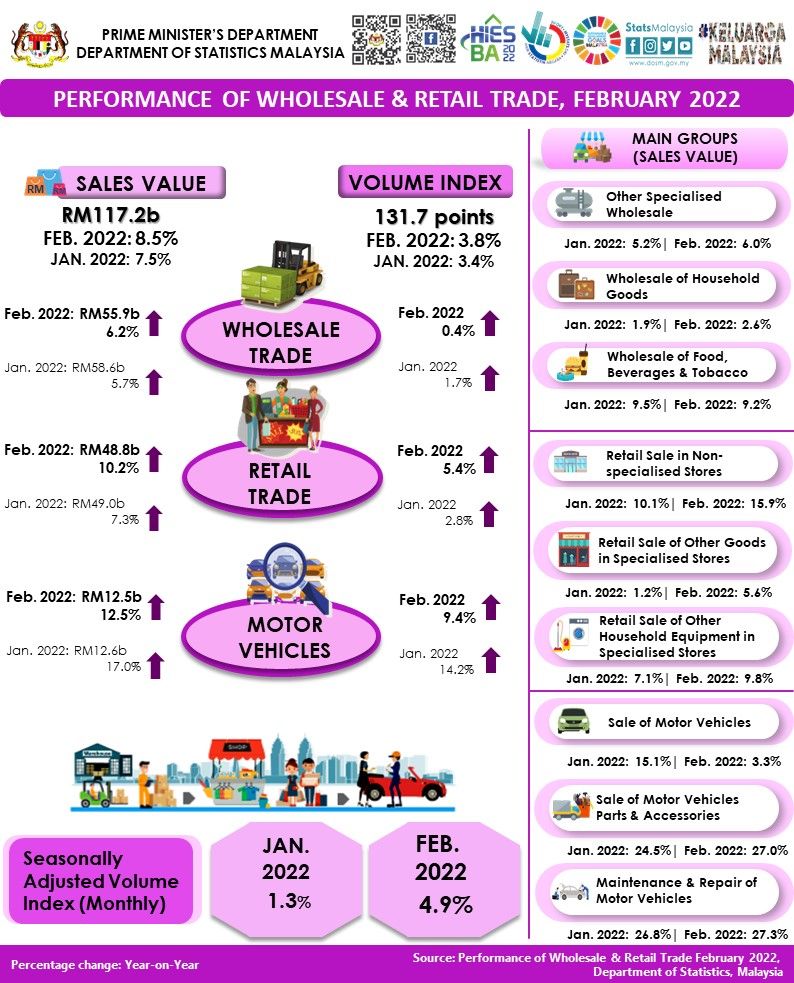