WHEN we discuss technology in business, “fintech”, short for financial technology, is one that is in vogue today. Every country in the world aspiring to push its economy forward is seeking to embrace fintech in as many aspects as possible.

A simple understanding to fintech is where technology is incorporated into financial sector along the value chain. The most relatable fintech example would be an e-wallet. On one end of the spectrum, it is a simple payment processing software or application which helps make transactions convenient.

On the other end, it can be a full- fledged digital bank or blockchain technology involving digital asset exchanges.

Digital technology has disrupted various sectors however rigid and traditional.

In fact, sectors which have been disrupted, have found new growth frontiers such as convenience marts, restaurants and even second-hand goods market.

Yet, when it comes to the financial sector, many are often intimidated by the traditional notion of a bank.

Historically, banks were deemed to serve the upper echelons of society, hence the paperwork, regulations, security and service are of the highest standards. This makes the financial sector less open to disruptive change and hesitant to embrace technology compared with other less regulated industries.

Paradigm shift in the financial markets

Whether we like it or not, the undercurrent of a shift in the financial markets has been happening over the years.

Within the online stockbroking space, companies such as Interactive Broker, TD Ameritrade and E-Trade have started to win market share from the traditional bulge bracket investment banks, making them a formidable force especially for the retail investors.

This resulted in big names like Charles Schwab buying TD Ameritrade in a US$26bil (RM109.5bil) all-stock deal in November 2019 and Morgan Stanley acquiring E-Trade for a staggering US$13bil (RM54.7bil) the year after.

From the table above, we can observe the different names within the fintech space. They vary in size, market and business model. While the underlying premise is facilitating transactions of the capital markets, each company has its way of deriving revenue.

For instance, Robinhood Inc, prior to its listing in 2021, was in the heart of the retail frenzy and meme stock mania.

While Robinhood, as its name implies, helps the common people by providing low cost and easy access to the capital markets, it derives income from providing order flows to market makers such as Citadel Securities. With that said, why is a company like Robinhood worth US$11.8bil (RM50bil). The more pertinent question is, how should these companies be valued?

Closer to home, there is one company which I have noticed to have carved a niche for itself within the capital markets of Malaysia.

Interestingly, its transformation over the years was led by a Singaporean chief executive officer Datuk Chay Wai Leong, a seasoned banker who had an illustrious banking career, who was given the mandate by the board to help grow Kenanga Investment Bank Bhd

When he joined in May 2011, Kenanga, which had decades of experience as a stockbroking firm, was at an inflection point due the ongoing fintech disruption.

At that point, Kenanga Investment Bank had a revenue of RM300mil and a paltry profit of RM200,000. Today, it delivered RM118mil in profit on the back of RM891mil in revenue. This is close to a threefold increase in revenue and 590 times jump in bottom line.

What is impressive apart from the financial performance and earnings growth is how Kenanga, being a considerably smaller financial outfit, navigated the Malaysia capital markets by going against banks backed by a large asset base from their commercial banking operations.

While many larger banks opted to dispose of their brokerage house to foreign players or competitors, it is quite remarkable to see the persistent effort by Kenanga in building its brand among retail investors, so much so that it spent many years of exploration with Rakuten before the joint venture materialised. It is this retail DNA that played a huge part in the success of the organisation.

I am a big believer in the power of the masses, especially the common people. It is always nice to serve a premium market where the margins are higher. However, traditional business wisdom has always been to go for a small profit but a huge turnover.

Of course, everything is easier said than done in hindsight. Even as recent as three years ago, the concerns about the dwindling retail investor participation in the Malaysia capital markets was real. We all know that the local stock market is largely dominated by institutional and foreign funds. It wasn’t until 2020 that the resurgence of retail investors had reached levels unseen in decades.

I do not deny that management excellence is an important factor, but I believe the clear-headed overall business strategy of focusing on the largely ignored retail investor community has paid off for Kenanga. The more important agenda now is to sustain the interest of the retail investors and common people in the capital markets.

As of Feb 28, the collective current and savings accounts had reached RM713bil.

Despite Malaysia’s fixed deposit rate being near an all-time low with inflationary pressure rising to mid-single digits, many are still opting not to deploy their savings for investment.

The recent proliferation of players, within the space of digital fund management or Robo-advisory, is a testament that there is a mass market. This is also probably why companies within this space should not be viewed solely as an online stock broking company when its offerings and potential for growth are much more than meets the eye.

Kenanga have successfully demonstrated how it transitioned from a stockbroking firm to having a robust fund management unit with growing assets under management. Earlier, there were some market commentators who highlighted the possibility of cannibalisation of market share for the Kenanga and Rakuten joint venture.

However, the number of Rakuten accounts which overlaps with Kenanga is a mere 1%.

Moreover, as Chay highlighted, the retail market is bigger than what we think as it has a great untapped growth potential.

The company’s recent launch of an artificial intelligence-driven Robo-advisory platform service called Kenanga Digital Investing, is to tap into the trend of the mass market segment of wealth management. I can resonate with this as wealth management should not be reserved only for the elites. The need, among the common people to hedge against inflation and save for their children’s education fund, is equally important.

With the highly anticipated five digital banking licences soon to be announced by Bank Negara, it is clear that Malaysia is on the right track as far as the global fintech trend is concerned.

There is indeed speculation of the potential winning consortiums circulating on the social media, but regardless of the winners, I believe profitability should take a backseat to serving the best interests of the people – namely by providing financial access to the underserve segments of the society.

Be that as it may, one must understand, that many fintech companies are loss-making and rely on frequent cashflow injection from venture capitalists, private equity firms or prominent investors. Valuation may vary and it is especially crucial to separate the wheat from the chaff. Ideally, profitability and growth should remain intact. Bleeding is not exactly business wisdom to achieve sustainability.

Ng Zhu Hann is Tradeview Capital Sdn Bhd CEO. He is also a lawyer and the author of Once Upon a Time in Bursa. The views expressed here are the writer’s own. 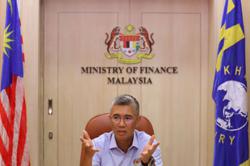