Too big to ignore 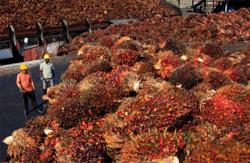 Statistics show that around 900,000 people work directly or indirectly in the industry, says the study. However, in recent years, concerns about the negative impact of palm oil cultivation on the environment, as well as the rise of protectionism in the global economy, has threatened Malaysia’s palm oil industry, notes Hirschmann.

DESPITE the environmental, social and governance (ESG) concerns about the palm oil industry, it is a massive sector that has grown tremendously in production and exports, more so when crude palm oil (CPO) prices hit record highs like nowadays.

Recent reports by Statista reseacher Raudhah Hirschmann also point out that palm oil is the world’s most used edible oil and is used in many consumer goods as well as in biofuels and Malaysia is the second leading producer worldwide after Indonesia.

Together, these two countries supply more than 80% of the world’s palm oil supplies.

In 2020, the largest export markets for Malaysian palm oil were China and India.

Meanwhile, a study by Sayyed Mahdi Ziaei and Issa Ali published on www.tandfonline.com says the jump of Malaysian palm oil production from 1.39 million tonnes in 1975 to 19.14 million tonnes in 2020 highlights the remarkable economic growth and profitability of the sector.

Citing other data, the study notes that the palm oil industry is the fourth largest contributor to the Malaysian economy, accounting for 10% of gross national income, and has played a significant economic role, especially during critical times such as the 1997 Asian financial crisis and Covid-19 pandemic.

Moreover, palm oil is a main source of foreign exchange earnings as 90% of the production is exported.

Statistics show that around 900,000 people work directly or indirectly in the industry, says the study.

However, in recent years, concerns about the negative impact of palm oil cultivation on the environment, as well as the rise of protectionism in the global economy, has threatened Malaysia’s palm oil industry, notes Hirschmann.

“The implementation of the European Green Deal could see restrictions on the use of palm oil due to concerns on its environmental impact.

The European Union, Malaysia’s most valuable export market, had effectively passed a law to phase out the use of palm oil in biofuels by 2030,” she writes.

“Malaysia has stepped up efforts to counter this negative perception of one of its largest commodities exports, including increasing the size of certified sustainable palm oil plantations,” adds Hirschmann.

According to the “Half Year Report 2021” by Refinitiv with feedback from the Council of Palm Oil Producing Countries secretariat, there has been a halt in palm oil output growth in the last three years.

This is mainly due to wet weather conditions, remaining effects of prolonged drought in the third quarter of 2019, lower fertiliser applications over the past few years and labour shortages (primarily in Malaysia), it says.

Malaysian Palm Oil Board data shows that CPO production in Malaysia in the first half of 2021 totalled 8.36 million tonnes (down 7.6% year-on-year).

Regarding the production outlook for the second half of 2021, the Refinitiv report says Indonesia is poised to have a more robust output recovery compared to Malaysia due to good estate management and no halt of operations as well as labour shortage.

“The Malaysian palm oil industry is short of 31,000 harvesters, prompting significant crop losses. Progress of recruiting locals for the job and bringing back foreign workers is slow in the face of the prevailing Covid-19 situation,” says the report.

“I think supply will be more restrained in growth, unlike the past, in the early 2000s. You have to comply with the RSPO requirements. No deforestation.

“Financing from banks is very difficult. They don’t even want to get near the word ‘deforestation’,” said Lee during the “Sustainable Commodity Growth” discussion at the Invest Malaysia 2021 Series 3 online forum in November.

“In Indonesia, the government has a moratorium, so land is harder to get. Also, another requirement now is you must get your lease title before you can even start planting. Plantations also have very long gestation period for greenfields,” added Lee.

Lee said the way forward would be to increase yield from existing plantations.

“Most of the (productivity) growth, I think, would be through brownfields. We still got some way to go, maybe 20% to 25% growth from productivity per hectare of land is possible,” he said.

Lee added that KLK is aiming to increase yield to six tonnes per ha, from the current 4.6 to 4.8 tonnes per ha.

“If we bring it to six tonnes, automatically the greenhouse gas emissions per tonne drops drastically and this is done through better management and also replanting with better planting materials,” he said.

Lee also noted that multinational companies are committed to sustainability and “they want to make sure that all these raw materials come from areas that are not deforested.”

Meanwhile, BIMB Securities Research reports that in October, CPO futures prices had accelerated to a fresh record of above RM5,000 per tonne, boosted by robust crude oil prices and concerns over tight supply of global vegetable oil as well as strong demand expected from India and China.

This was also compounded by firmer soybean oil price in Chicago Board of Trade as well as palm olein in Dalian Commodity Exchange.

This is given the acute labour shortage caused by the closure of Malaysia’s borders and improved demand prospects from the reopening of global economies as well as favourable soybean oil prices performance on higher demand for soybeans and its derivatives for food, feed-meal and biofuel feedstocks.