The piling and foundation company, which currently wholly owns its business in Singapore through Pintary International Pte Ltd, has seen impressive growth.

ABOUT three years after its foray into Singapore, Pintaras Jaya Bhd

(PJB) is already eyeing a public listing of its subsidiaries in the city-state.

The piling and foundation company, which currently wholly owns its business in Singapore through Pintary International Pte Ltd, has seen impressive growth.

PJB would like to list its Singapore business on the Singapore Exchange after the Covid-19 uncertainty subsides and also to gain more visibility for its business operations there.

PJB’s founder and managing director Chiu Hong Keong tells StarBizWeek that timing is key and the aim is to realise this goal in the medium term period.

“It is not too difficult to do this (public listing), it is only finding the right timing then we will do it. We want them to operate as an independent unit in Singapore and one way to do this is through a public listing.

“So if they need funding, they can raise their own funds, without having to ask the parent company. A listing of the Singaporean units would be a natural progression for them in Singapore,” Chiu says.

He says Pintary International is already operating independently. The group is targeting the listing of the Singapore business within one to two years.

“We are seeing stronger growth coming through Singapore now. This is the right thing to do even though it will mean paring down our stakes.

“The objective is for it to be an independent unit to let the professionals grow the company there.

“It would be more sustainable, where it is not shareholder-run but professionally-run,” he says noting that he has not been to Singapore for the last 20 months due to the Covid-19 pandemic.

“We privately bought this company first but there was a lot of mess for us to clean up when we bought it as it had losses and was not making money.

“When we bought it, it was one of the worst periods for the construction industry in Singapore. That’s when many piling companies went bust and then there was this opportunity,” Chiu says.

He says that he and Khoo chose to do it privately because they did not want the listed PJB to be exposed to risks.

“Some people don’t believe this but this was our true intention.

“After some months, we got lucky and the construction industry in Singapore started to turn in 2018.

“Once this happened we quickly sold the company to PJB – at near cost. But when we did this we ran into a big issue with our institutional shareholders,” he says.

According to PJB’s circular to shareholders then, the original cost of investment in Pintary International to Chiu and Khoo was S$7.20mil or RM22.26mil.

Their shareholdings were acquired from May 2017 to May 2018.

Chiu says that none of the institutions supported this move because of concerns of it being a related-party transaction bailout.

“They thought that we were trying to bail ourselves out by putting a bad company into PJB although it was only a small purchase sum of S$5.60mil or RM16.71mil (to PJB).

“However, all the other shareholders, besides the institutions, pulled the transaction through – these were mostly the other long-term shareholders as we couldn’t vote on it (as an interested party).

“But within a few months, we earned back what we have paid – after one year – our profit was more than double of what we paid,” he adds.

He says that it was always their intention to eventually inject Pintary International into PJB.

“We bought it privately because if it was a wrong move, it would just be a private matter – nobody would know about this.

“If it is done under the company, we would be questioned by the other shareholders. We thought it would be better that we went in and try it out ourselves first,” Chiu says.

Pintary International has also provided a boost to the Malaysian operations because of the strong exchange rate differentials between Malaysia and Singapore.

“We have been fortunate and had recently reported our best year in the history in terms of profit performance due to a great team we have,” Khoo says.

PJB reported a net profit for the financial year 2021 ended June 30, which had doubled to RM64.12mil from a year ago on the back of revenue remaining flat at RM370.44mil.

Revenue in its fourth quarter was more impressive as it had grown year-on-year by almost four times to RM99.77mil, while net profit had jumped by over five times to RM15.97mil.

“Singapore constitutes around 80% of our revenue. When we entered into Singapore, the Malaysian construction scene saw a downturn. We already know that it’s going to be tough,” Chiu says.

“We moved about 30% of our capacity to Singapore instead of idling here. We had seen an uptrend in the construction sector in Singapore in the housing, industrial development, government infrastructure – all these jobs did well. We rode this wave up,” he adds.

PJB is among the top four piling companies by the number of rigs and the company hopes that the good performance there will continue moving forward. 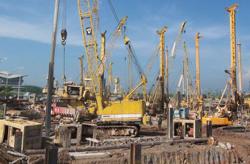