PETALING JAYA: The plantation industry has been going on a joyride with crude palm oil (CPO) prices surging to record-high levels, but this trend may shift to a lower gear over the next few months.

According to Malaysian Palm Oil Board director-general Ahmad Parveez Ghulam Kadir, the industry needs to brace for a correction in CPO prices.

Towards the end of 2021, Ahmad Parveez said CPO production and exports are expected to show some improvement on a year-on-year (y-o-y) basis.

As a result, this would bring about a more manageable stock level and cause some correction in CPO prices.

“In view of the situation, the CPO price in 2021 is expected to remain high at an average of RM4,100 per tonne.

“The improvement in production and exports is expected to sustain in the following year supported by positive development in the Covid-19 situation, better prospects of the global oils and fats and favourable trade policies in importing countries,” Ahmad Parveez said in his presentation at the 2021 Palm Oil Internet Seminar (Pointers). As for the local CPO production, he also projects the output to drop again to 18 million tonnes in 2021, down 6% y-o-y.

It is noteworthy that MPOC had previously expected the country’s CPO output to recover to 19.6 million tonnes for this year.

However, the prediction was revised downwards due to the Covid-19 restrictions and labour shortage faced by the plantation players. While palm oil output in Malaysia is estimated to decrease this year, Indonesia’s CPO production is likely to grow to above pre-pandemic levels, according to Wan Zawawi in his presentation.

He said the Indonesian CPO production for 2021 is expected to be 45.5 million tonnes, higher than 43 million tonnes and 44.3 million tonnes in 2020 and 2019, respectively.Commenting on Malaysia’s palm oil exports for the January to September 2021 period, Wan Zawawi noted that total exports dropped by 12% to 11.2 million tonnes.

“Asia Pacific showed the largest decline of 1.2 million tonnes due to lower imports by China, Singapore and Vietnam.

“Both Europe and Americas imports declined by 20% and 45% respectively due to ongoing challenges in these regions.

“Imports by the Middle East and North African region increased by 10% to 1.8 million tonnes due to high imports by Iran and the United Arab Emirates.

Wan Zawawi pointed out that India had lifted its restriction on refined palm oil imports from July to December 2021.

This development, he said, might change the preference of palm oil imports in India, which can have an impact on Malaysian exports.

He also expects an increase in the demand for edible oils during the upcoming festive season, particularly for Deepavali in India and Mid Autumn in China.

This would likely benefit palm oil as a key edible oil.

“There will also be demand for oils and fats to cater for other festivities such as Halloween and Christmas,” he said. 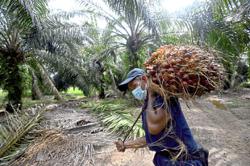