TA Securities reckons that food and beverage players and retailers with large domestic exposure such as Aeon Co (M) Bhd, (pic) Amway (M) Holdings Bhd, Padini Holdings Bhd and Nestle (M) Bhd are set to benefit from the government’s efforts to raise disposal income alongside the implementation of business-friendly policies.

KUALA LUMPUR: After the rollback of strict movement restrictions, the consumer sector is set to further benefit from what is expected to be an expansionary budget for next year.

Finance Minister Tengku Datuk Seri Zafrul Aziz has reiterated that Budget 2022 will be expansionary and will focus on speeding up recovery, strengthening economic resilience and catalysing reform.

As such, it is believed that livelihoods would remain protected and gradually show an improvement as the economy revitalises. This will, in turn, support consumer spending moving forward.

In a recent report, TA Securities opined that stimulus measures may be repeated or enhanced under the annual budget.

“Moving into 2022, we believe the government would remain focused on protecting and improving the livelihood of people in light of challenges posed by the Covid-19 pandemic by formulating strategies around cash assistance programmes,” it said.

are set to benefit from the government’s efforts to raise disposal income alongside the implementation of business-friendly policies.

TA has kept its “overweight” stance on the consumer sector.

Meanwhile, RHB Research expects a sustained recovery for the consumer sector as the country proceeds to treat Covid-19 as endemic.

Positive drivers for the sector include the highly encouraging vaccination progress, which should soon include booster shots and encompass a bigger proportion of the local population.

“This will lift consumer sentiment, in our view, while consumption will be supported by various stimulus packages and a low interest rate environment.”

Nonetheless, RHB flagged that earnings for the sector may soften in the third quarter on a quarter-on-quarter basis considering the longer lockdown period and the absence of festivities during the quarter.

Additionally, it noted that the return in foot traffic in recent weeks was not as strong as in previous movement restriction relaxations. This may be likely due to the still high number of cases.

That said, RHB believes the worst is over and consumer confidence and footfall normalisation should see a more apparent pickup in the seasonally stronger fourth quarter onwards.

“We believe investors should have started to look beyond the near-term weakness and focus more on the potential recovery – this is as lockdown restrictions and limitations have been gradually eased or lifted since August.

“These include the reopening of dine-in options and higher workforce capacity – accordingly with the positive vaccination status – and, subsequently, the lifting of interstate travel bans, extension of operating hours and reopening of more sectors,” it said.

RHB, which has a “neutral” call on the sector, added that corporates have also begun to put their best foot forward in resuming business operations despite having to adhere to stricter standard operating procedures. Many have started on their expansion plans given the easing of movement restrictions.

This is certainly indicative of a positive turn for the sector. 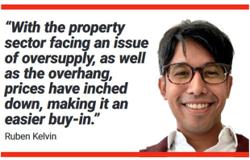