Record prices of palm, and new government promises of payouts even if Indian prices slump, are driving the effort, which aims to lift domestic output sharply within a decade from a tiny level now.

Record prices of palm, and new government promises of payouts even if Indian prices slump, are driving the effort, which aims to lift domestic output sharply within a decade from a tiny level now.

“The return on oil palm will at least be double that of rice and banana, and it is far less labour-intensive,” said B. Brahmaiah, one of the hundreds of farmers nationwide who are racing to switch from the usual staple crops, such as rice.

Brahmaiah, 37, owns a 2.4ha plot in the West Godavari district of Andhra Pradesh state, where fertile soil, ample water and oil processing mills promise to be a strong driver of higher production.

A national Mission on Edible Oils launched last month aims to boost output to 2.8 million tonnes by nearly tripling the crop cultivation area to one million ha, so as to curb oil imports, which exceeded US$11bil (RM46bil) last year.

Green groups have criticised the push, saying it could lead to water scarcity, reduce forest cover, and hit biodiversity, but Mathur dismissed these fears as unfounded, saying authorities would protect the environment from harm.

Still, planting all 2.8 million ha with palm will be a major task, as the thirsty plants need regular, profuse supplies of water, a scarce commodity in India, where agriculture relies on annual monsoon rains.

Another barrier to the switch is that oil palm requires up to four years to yield sellable fruit, unlike rice, cotton or pulses, which can be harvested in less than six months.

The government plans to make up some of the cost by offering 29,000 rupees (RM1,644) for each ha of new palm cultivation, and help with planting other quicker-growing crops on farms.

It will also guarantee a viability price for fresh fruit bunches, paying the difference if market rates fall below that level.

Even with such assistance, few small, cash-starved farmers will be able to wait years for income to come in, Godrej’s Niyogi said.

Farmer O. S. Chalapatha, who planted oil palm on a 14ha plot more than a decade ago, said his earnings from a job with a private firm initially helped defray costs.

“In the first few years, a huge amount was required to develop oil palm plantation,” he told Reuters.

“I managed to arrange it, since I was employed in a private company. But it is not possible for everyone.”

Also shaping as a critical threat is a shortage of palm seedlings.

For all its efforts, India may not be able to produce more than two million tonnes of palm oil by 2029/2030, when demand is expected to have risen another five million tonnes, said a leading edible oil refiner.

“India will remain import-dependent in the foreseeable future,” said the refiner, who asked not to be identified.

“Oil palm and other programmes can only reduce some incremental growth in imports.” — Reuters

But on his farm in Andhra Pradesh, Brahmaiah has his eyes firmly fixed on the prize.

“Oil palm is more profitable than other crops once it starts yielding,” he said. 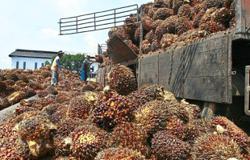