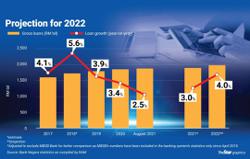 's recovery to take on a more gradual pace than in other companies as its utilisation rate was impacted from the movement control order.

According to the research house, KESM's utilisation rate in FY21 dipped below 30% due to the sporadic relaxation and tightening of the restrictions.

"We anticipate a very gradual recovery for KESM instead of an exuberant one seen in other companies," it said in a note.

In FY22, Kenanga expects the utilisation rate to improve as the group increases the vaccination rate of its workforce, coupled with the easing of movement restrictions.

Over the longer term, KESM remains optimistic to benefit from the automotive semiconductor boom as it is expected to be a multi-year growth trend.

In its recently announced 4QFY21 results, KESM's core net loss of RM1.5mil brought FY21 core net profit to RM4mil, which was below Kenanga's but above consensus expectations at 57% and 158% of full-year estimates respectively.

The research house said the group suffered impact from the movement control order and reduced loading volume due to the wafer shortage, resulting in its utilisation rate falling below 30%.