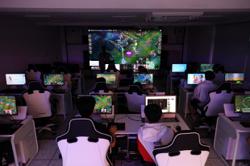 Cutting back: The assembly line at the LG factory in Gumi. Manufacturing lost 76,000 jobs in South Korea in July, indicating that the private sector has taken a beating from the pandemic. ― Bloomberg

SEOUL: The surprise drop in South Korea’s unemployment rate to a record in August belies broader weakness in the job market as the nation’s worst virus outbreak discouraged people from looking for work and companies from hiring.

The number of people either employed or searching for jobs fell to the lowest level since March, the statistics office said yesterday. The decline in labour-force participation helped push the jobless rate down to 2.8% from 3.3% in July, defying economists’ expectation of an increase to 3.5%.

Still, the economy added 518,000 positions from the slump a year earlier, marking a sixth straight month of gains. About half of the jobs created since February came from government-funded programmes.

South Korea’s tighter restrictions on public activity have made it difficult for people to go out in search for jobs while private businesses are also cutting back on regular hiring as the pandemic drags on. Many of them are adopting an on-again, off-again hiring approach instead, Statistics Korea official Jeong Dong-myeong said at a briefing.

Government officials had expected the labour market to deteriorate in August, reflecting a virus wave that put Seoul under a semi-lockdown in mid-July.

With the jobless rate coming in sharply below market consensus for a second month, the reasons behind the low readings will be scrutinised by the Bank of Korea as it mulls the timing of a second interest-rate hike.

“It’s hard to view this as a positive sign,” said Sung Tae-yoon, an economics professor at Seoul’s Yonsei University. “Public-sector jobs are helping to shore up the labour market, but the supply of quality jobs from private companies is still lacking.”

Of key interest in the data was the economic participation rate, which declined to 62.8%, the lowest since March.

The finance ministry took the latest readings as positive, highlighting month-on-month gains that brought the level of employment to 99.6% of the pre-pandemic peak in February 2020. The ministry noted the hit to the services industry was less than in previous waves.

“Another surprise drop in South Korea’s jobless rate illustrates the labour market’s resilience in the face of the country’s worst outbreak yet and a quasi-lockdown in greater Seoul – suggesting the economy is learning to live with the virus. Lower participation contributed to the decline, but the job market still added positions as activity continued to hold up,” said Bloomberg Economics Asia economist Justin Jimenez.

South Korea’s economy has held up during the latest outbreak, with exports and investment powering ahead and the damage to consumption smaller than expected. ― Bloomberg