Why business must lead war on climate change

The European Union has got its act together with a Circular Economy Plan. It sees the problem clearly: “There is only one planet earth, yet by 2050, the world will be consuming as if there were three. Global consumption of materials such as biomass, fossil fuels, metals and minerals is expected to double in the next 40 years (In this file pic EU is pictured in front of the EU Headquarters in Brussels)

TECHNICALLY, today Sept 11, the United States’ war on terror is over.

Such financial and human costs of the war on terror may be trivial compared with the coming climate change costs on the whole planet. War costs only add to climate warming.

The Brown University study showed that “the US Department of Defence is the largest institutional consumer of fossil fuels in the world and a key contributor to climate change. Between 2001 and 2017, the years for which data is available since the beginning of the war on terrorism with the US invasion of Afghanistan, the US military emitted 1.2 billion tonnes of greenhouse gases.”

Today, the IPCC 2021 Sixth Assessment has warned that the planet is running out of time to deal with climate change. This is an existential crisis not just for one country but the whole of mankind. Like the pandemic, we need a whole-of-government and whole-of-society to act decisively in the war on climate change.

The European Union has got its act together with a Circular Economy Plan. It sees the problem clearly: “There is only one planet earth, yet by 2050, the world will be consuming as if there were three. Global consumption of materials such as biomass, fossil fuels, metals and minerals is expected to double in the next 40 years, while annual waste generation is projected to increase by 70% by 2050.”

The world spent US$2 trillion (RM8.27 trillion) on military expenditure or 2.4% in 2020, four times the amount spent on energy transformation. The first can only add to global carbon emission and more human and natural destruction, the other addresses our common fate.

So why should business take the lead in this war on climate change?

The simple answer is that the business community makes almost all the products that the world consumes, including weapons of war. Just 100 of these private and state-owned companies were responsible for 71% of the global GHG emissions that cause global warming since 1998, according to the Carbon Disclosure Project (CDP). Up to 80% of products’ environmental impacts are determined at the design phase, so the business sector can re-tool these green products fast. That is the profit opportunity.

Another reason is that governments or politics simply have not got their act together. Harvard strategy guru Michael Porter, in his 2020 book on Politics put it this way: “Most people believe that our political system is a public institution with high-minded principles and impartial rules derived from the Constitution. In reality, it has become a private industry dominated by a textbook duo... incapable of delivering solutions to America’s key economic and social challenges.” Put climate change in that basket of problems.

Michael Porter recognised that there are no scientific or business model barriers to finding solutions to tackle climate warming. Guess what? There is also no shortage of money with central banks providing all the money to tackle the pandemic and financial crises. We have an existential crisis whereby the rich are getting richer, whereas the people at the bottom half of society are paying for the climate change disasters through loss of habitat, jobs and lives.

This is neither sustainable for politicians nor for businesses.

In 2012, billionaire businessman Richard Branson claimed “our only option to stop climate change is for industry to make money from it.” After the pandemic and this year’s hurricanes, forest fires and floods, businesses around the world are waking up that there is no alternative except to embrace climate change in their business models. The “business as usual” of denial has shifted quickly to adaptation and mitigation.

One reason for the change of mind is that the finance industry realised that climate change imposes huge financial risks. They created the Task Force on Climate-Related Disclosure (TCFD) to pressure industry to act on climate change through financial disclosure. In its first report, TCFD reported that US$640bil (RM2.65 trillion) costs were incurred from climate-related natural disasters and that up to US$43 trillion (RM177.87 trillion) financial assets would be at risk by 2100.

If politics is toxic, the only group of people who can lead action on climate change is the corporate sector. Of course, corporate captains are not themselves the owners of these corporations, since many are owned by institutional funds. The top 500 asset managers control over US$104 trillion (RM430.20 trillion) of assets, with the top 20 controlling 43%. So, convincing a small number of key corporate owners to act will make a serious difference on climate action.

One example suggests that serious climate action by the global rich is not just possible, but feasible.

Thanks to Brazilian President Bosonario and his profit-driven business allies, the Amazonian forest is disappearing rapidly. The Amazon forests and biodiversity rich soils store the equivalent of four or five years’ worth of human-made carbon emissions, up to 200 gigatonnes of carbon. At US$50 (RM206.82) per tonne for carbon, the real Amazon is worth US$10 trillion (RM41.36 trillion) to everyone in the world. By comparison, Amazon.com’s market cap is now US$1.8 trillion (RM7.45 trillion). The top 1% of the world’s rich people owned US$173.3 trillion (RM716.86 trillion) in 2019, almost double world GDP.

Can some friendly billionaires club together to buy the real Amazon from Brazil, whose total external debt is currently US$548bil (RM2.27 trillion)?

This may sound like a joke but climate warming is deadly serious business. If business is not serious about the climate war, then start scrambling to get on the next space flight organised by Branson or Jeff Bezos, just like what happened in Kabul. 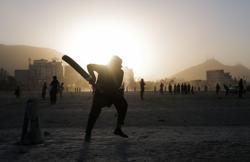