“If we can do it (integration) by January or February, we are in good shape,’’ Axiata group president and CEO Datuk Izzaddin Idris said yesterday.

’s operational resilience led to higher profit in the first half of 2021 and while it expects the same for the second half, it also hopes for a fast approval from the telecoms regulator to its proposal to merge its mobile unit with Digi.com Bhd

Axiata submitted its proposal for the merger of Celcom Axiata Bhd with Digi to the Malaysian Communications and Multimedia Commission and other authorities in July.

“We submitted in July and hopefully in due course we will get the decision. (However), we like it to be sooner than later as there is a period of integration (involved). Quarter one or two, and certainly not beyond.

“If we can do it (integration) by January or February, we are in good shape,’’ Axiata group president and CEO Datuk Izzaddin Idris told a media briefing yesterday.

He added that the merger was a good plan for the group’s future in view of the evolution of the telecoms sector and industry consolidation.

As for its financial results, Axiata reported an over 200% rise in net profit to RM277mil for the second quarter ended June 30, 2021 versus RM80mil recorded in the same period a year ago.

Its revenue stood at RM6.3bil versus RM5.7bil previously, while earnings per share (EPS) stood at three sen.

The group declared a four sen dividend for the quarter and Izzaddin said it was in line with its plan to become a high dividend company by 2024.

It also announced a contribution of RM5mil in medical equipment to the medical frontliners via the Greater Klang Valley Special Task Force under the Health Ministry.

The higher results achieved were led by improved top line performance, reduced finance cost amid less borrowings and lower taxes during the quarter amid the extended lockdowns.

Its balance sheets remained healthy and the group had a cash balance of RM7bil as at end-June.

He said Celcom added 1.02 million subscribers year-on-year and expects to retain them although the churn rate is a big factor in the mobile sector.

The group expects the growth momentum and better earnings to continue into the second half of the year.

However, Izzaddin cited risks of a prolonged pandemic, regulatory and 5G challenges as factors that could have an impact on its growth.

Capital investments will go on as planned to meet the high data consumption. 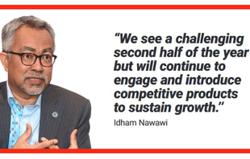 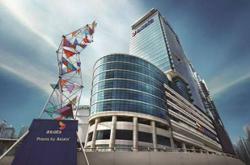