Refining margins for 10 ppm gasoil dipped by a cent to $8.62 per barrel over Dubai crude during Asian trade even as crude oil prices fell for the first session this week, cutting short a three-day rally.

Persistently rising coronavirus cases in key markets including India, Vietnam, South Korea and Malaysia are weighing heavily on regional industrial activity, market watchers said. Arbitrage demand from the West, however, is supporting the Asian market to an extent, according to trade sources.

The exchange of futures for swaps (EFS), which determines the gasoil price spread between Singapore and Northwest Europe, traded around minus $30 a tonne on Thursday, a level at which the arbitrage is usually profitable.

Re-supply volumes into the Singapore straits have been low in recent weeks as the arbitrage to the west is currently open, a Singapore-based trader said.

"Assuming no return to wide-scale lockdowns, we would expect demand-side support to have endured since, with our forecast for European gasoil/diesel demand over Q3-Q4 roughly on par with its 2019 levels," research consultancy JBC Energy said in a note. 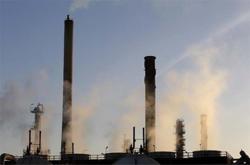