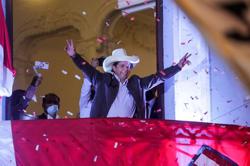 Pedro Francke, economy spokesperson of Peruvian left-wing presidential candidate for the Peru Libre party, Pedro Castillo, speaks with AFP during an interview at his home in Lima on June 11, 2021. (Photo by ERNESTO BENAVIDES / AFP)

LIMA: Peru’s Finance Minister Pedro Francke (pic) wants to retain the central bank president after the two men spoke, and said he’s been given room by the new government to implement his economic policies.

Francke, a former World Bank economist, was sworn in late Friday night amid earlier investor concern that he wouldn’t take the post following cabinet appointments by president Pedro Castillo, including naming Guido Bellido, a lawmaker who considers the communist government of Cuba to be a democracy, as prime minister.

“It seemed essential to me to have full support for the economic policy that we had proposed,” Francke said on Sunday in his first interview in the new post, adding that he hasn’t had much contact with Bellido before they were sworn in.

“Fortunately, that has already been resolved and it seems to me that it gives us space to develop our economic line in a completely safe way.”

For investors, Francke offered a counterbalance, and a reappointment of Julio Velarde, the central bank president since 2006, would help preserve a sense of continuity for markets.

Peru’s stock market is the world’s worst performer this year, and the sol’s slump was more than any other currency last month, according to data compiled by Bloomberg.

The yield on dollar bonds due 2050 fell one basis point in Asia trading yesterday, ending six days of increases. — Bloomberg

“We are convinced that it’s necessary to act with fiscal responsibility” and keep debt “at a prudent level,” Francke said. “The most important thing is to ensure that there is coordination between economic policy and monetary policy,” he said, adding that that’s the objective of his meeting with Velarde.

Another call with Velarde has been scheduled for yesterday and he expects the central bank chief to accept Castillo’s offer to stay on in the role, Francke said.

Castillo, a former schoolteacher and union leader, emerged out of relative obscurity this year to win the presidency after consolidating support from Peru’s left-wing. He’s vowed to spend much more on education and health while seeking greater tax revenue from mining operations. He also wants to rewrite the constitution.

Francke, who’s tasked with reviving an economy battered by recession and the world’s worst Covid-19 death rate, said the country will invest heavily in health care.

“Tax collection has come at a good speed, growing at a good pace,” he said. “There is room to have a little more spending.”

He also said there are plans to announce more tax measures shortly, including a levy on mining.

During the campaign, Francke advised Castillo on the economy and vowed to largely maintain the country’s macro-economic policies while putting more focus on social issues.

Francke is popular with investors, having called for inflation-targeting, fiscal prudence and respect for private property. His appointment helps ease concerns such as Castillo’s inaugural address last week, in which he called for Peru to retake control of its natural resources, renegotiate its-free trade deals and dramatically boost social spending. 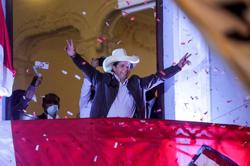