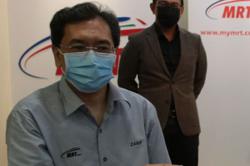 KUALA LUMPUR: The Mass Rapid Transit 3 Circle Line project received over 40 submissions from major construction players in the country under the request for information (RFI) exercise.

MRT Corp chief executive officer Datuk Mohd Zarif Hashim said on Thursday the exercise which began on April 9 had been completed and there were over 40 submissions when the deadline ended on May 25.

“We have engaged the players who participated in the RFI and we have provided them with feedback on the information given,” he said.

The RFI exercise was to enable MRT Corp to gauge the interest, capacity and capability of local players of construction industry in relation to the project.

The information will also help MRT Corp in establishing the best structure for the project.

He also said MRT Corp had also received several private funding initiative (PFI) proposals for the project after the briefing in April. It was still evaluating the merits of the PFI scheme.

“In view of this, MRT Corp needs to adjust the timeline for the tender process for the first package of the project. MRT Corp will announce the new date for the calling of the tender in the future,” he said.