The group said sales soared for both UMW Toyota Motor (UMWT) and its unit Perodua, driven by new model introduction, festive campaigns and the sales tax exemption despite the global shortage of semiconductor chips.

KUALA LUMPUR: Despite the challenging environment, UMW Group doubled its automotive sales to 25, 568 units in May this year compared with 11, 342 units recorded in May 2020.

The group said sales soared for both UMW Toyota Motor (UMWT) and its unit Perodua, driven by new model introduction, festive campaigns and the sales tax exemption despite the global shortage of semiconductor chips.

“Toyota Vios, Yaris and Hilux continued to be UMWT’s best-selling models, cumulatively contributing 78% of total sales for the month of May 2021.

“The all-new Toyota Corolla Cross and Harrier, and the improved Fortuner and Innova also contributed positively to UMWT’s sales in May, ” the group said in a statement.

In the first five months of this year, UMWT recorded sales of 34, 026 vehicles, higher than 14, 052 units registered in the corresponding period a year ago that was impacted by the first round of movement control order. However, the sales recorded last month was lower than 20, 399 units achieved in April 2021, mainly due to the chips shortage.

“Nevertheless, the demand remains strong for all Perodua models. Furthermore, Perodua in May introduced the refreshed Aruz, which offers added convenience and a new colour but maintained the model’s selling price, ” UMW said.

For this year, Perodua is on track to achieve its target of delivering 240, 000 units.

“However, the chips shortage has impacted Perodua’s production and it is exploring various means to overcome this problem.

“Both UMWT and Perodua have a healthy level of outstanding bookings that can be fulfilled once the chips problem is resolved, ” he added.

Moving forward, the group expects the automotive sales momentum to continue despite the lockdown. 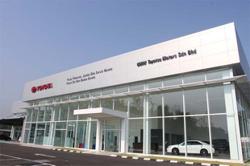