In the limelight: Toshiba is beset by a series of troubles over the past decade from an accounting scandal. — Reuters

IF Toshiba Corp tried to bully hedge funds through the government, that’s a bad look all around. The only parties who come off well are the activists the company allegedly aimed to suppress.

The Japanese company – beset by a series of troubles over the past decade, from an accounting scandal to a near brush with bankruptcy – worked with the government to block shareholders from exercising their rights, an independent report released last week found. It details – blow-by-blow – emails, text messages and correspondence among Toshiba management, investors and the Ministry of Economy, Trade and Industry.

After an emergency meeting over the weekend, the company said four executives, including two outside board directors, would resign.

Meanwhile, the ministry said it would await the company’s response to the investigation before taking action.

The almost 150-page report, put together by law firms, was commissioned by Toshiba’s largest shareholder to investigate whether a July 2020 board meeting was conducted appropriately.

At the gathering, management had prevailed and shareholder proposals to elect outside directors – a basic tenet of good governance – were rejected.

The unfolding drama at one of Japan’s most storied companies now raises questions about whether attempts to improve corporate governance in the country can allay investors’ misgivings about Japan Inc and its coziness with those in seats of power.

Introduced as part of former Prime Minister Shinzo Abe’s economic reforms in 2015, the stewardship code was initially lauded as a step toward more engagement and protection of shareholder rights, especially those of minority stakeholders and foreigners. The latest at Toshiba is something of a vindication for activist hedge funds, long reviled within the country for pushing a degree of public engagement and scrutiny that is anathema to corporate tradition.

The contents of the report describe Toshiba management’s deep-seated paranoia and aggression in fending off change, raising questions about whether all the actors were doing what they should have been in the interest of shareholders more broadly. It’s exactly what the company hoped to avoid: the poor publicity of a proxy fight, or as the report put it, “big drama.”

It’s understandable that those involved wanted to “avoid the shareholder proposal being publicised and causing a fuss, ” according to the findings.

Toshiba has had its share of bad press and messy situations; in recent years, the company has been better known for its troubles than its technology, televisions or other past glories.

The electronics giant is no stranger to foreigners on its board, either. Yet by snuffing out any debate and digging its heels in, as the report suggests, the company showed no real concern for shareholders (at the outset) or the perception of good governance. Its efforts to keep things quiet ultimately backfired.You could argue the publicly listed firm, which also counts the likes of Black Rock Inc among its top holders, seems to have been preoccupied with everything but shareholder value.

In April, according to the findings, while asking about an amendment to the Foreign Exchange and Foreign Trade Act, one Toshiba executive said “our main concern is whether we can suppress activists or not.”

That’s perhaps the most damning of all the findings.

Overseas investors were the ones who rescued Toshiba from a potential delisting mess after a US$5.4bil (RM22.23bil) Goldman Sachs Group Inc-engineered rights issue in 2017.

Meanwhile, alleged government intervention to act in Toshiba’s favour doesn’t give foreign investors much confidence – even if the involvement wasn’t explicit, such as exerting pressure of some sort on investors, or even the allusion of that, regardless of whether it was done to protect national security, as the report suggests.

Then there are those who should have been safeguarding shareholders’ rights.

A key person involved in working with the Ministry of Economy, Trade and Industry was Hiromichi Mizuno, the former chief investment officer of Japan’s Government Pension Investment Fund, which is the world’s largest and should be a standard-bearer of ESG principles.

He is also an independent director on the board of Tesla Inc. Mizuno, or “Mr. M” per the report, was tasked with speaking to the Harvard Management Company, the university’s endowment, after which it abstained from voting – a “highly unusual” outcome “in light of the fiduciary duty” it owes to investors, according to the report.

(In April, Harvard Management Co sold its stake to 3D Investment Partners, an activist fund, making it the second largest shareholder, the Nikkei reported citing people familiar with the matter. At the time, Harvard said it didn’t comment on specific holdings. Mizuno has so far not responded to press requests for comment.)

Finally, the report set out to determine whether “pressure” was exerted on proxy advisory firms, which advise big investors like BlackRock and others to decide how to vote in such complicated situations.

The report details how, in early July, Toshiba conducted online interviews with Institutional Shareholder Services and Glass Lewis & Co. Weeks later, the two proxy advisory firms recommended investors vote in favour of the company’s proposal and against the ones put forward by each shareholder.

Such interaction is not unusual. According to the report, Japanese subsidiaries of ISS and Glass Lewis both “denied any pressure being placed on them.”

On Friday, after the report published, Glass Lewis recommended against the reappointment of Toshiba’s board chairman and four others. Separately, ISS recommended voting against five directors.

Toshiba, for its part, seems to have come around to some shareholder demands, too. In a press conference Monday, the company apologised to shareholders for “causing confusion and worry.”

Last week, it had detailed plans to return 150 billion yen (US$1.37bil or RM5.64bil)) to shareholders in the form of buybacks and a special dividend. It shouldn’t have taken a bare-all report to get people motivated to act, but the outcome is the right one.

In the end, it looks like activist hedge funds aren’t so big and bad after all. They’re doing what they’re supposed to do. Now it’s open season for Japan Inc. — Bloomberg 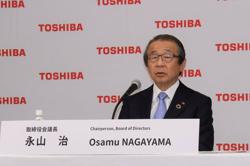