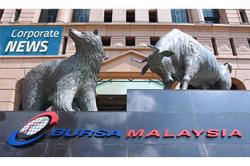 (CGB), which has been on an uptrend, climbed to its highest in over 17 years, reaching RM2.92.

The masking tape manufacturer rose 7.75%, or 21 sen to RM2.92. It is one of the most actively traded counters with 23.3 million shares done. Year-to-date, it has appreciated a whopping 722%.

The group would have a 70% stake in the proposed joint venture while Multi Scopes would own the remaining 30%, it said in a statement.

Earlier this year, CGB secured a RM100.5mil project for the upgrade of a water supply system in Lahad Datu, Sabah.

It has also proposed a private placement of 18 million new shares, the proceeds of which would be used to upgrade the manufacturing arm's capacity and fund a property project in Penang.

At at end-March, the group's construction arm had an orderbook of RM130mil comprising of the Lahad Datu project and the Montage condominium project in Bayan Lepas, Penang.